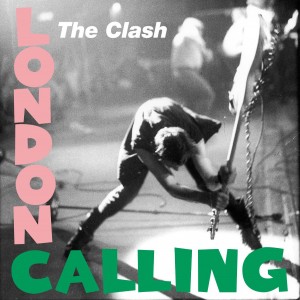 Last Monday, as I ran errands in the mild midday sun, I remembered the Clash’s London Calling, one of the best albums ever, and this song highlights its timelessness. Considering the recent state-sanctioned murders of African-American citizens in this fine country of ours, “The Guns of Brixton” seems as relevant a protest song as any ever written. It’s complicated, though. We’ve been showing up “with our hands on our heads” as an act of solidarity, but we should be more pissed about it; we should protest in force, not necessarily with our hands “on the trigger of [our guns],” but with that same intensity of passionate resistance to the status quo. Paul Simonon recorded the gnarly vocal track while staring down a record executive; surely, we can all be at least as angry as that.

What are we gonna do now?

The arena-rock aesthetic of “Clampdown” may sound archaic, but the lyrics are what really keep the song anthemic. “Kick over the wall, ‘cause government’s to fall/ How can you refuse it?/ Let fury have the hour, anger can be power/ D’you know that you can use it?” Or “You don’t owe nothing, so boy, get runnin’/ It’s the best years of your life they want to steal.” I don’t care if you think distorted guitars are passé at this point in music. If you listen to “Clampdown” and don’t feel like punching the next billionaire you meet, you’re living life the wrong way.

Ginsburg insisted that Joe Strummer prophesied global warming with the song’s chorus: “The ice age is coming, the sun’s zoomin’ in/ Engines stop running, the wheat is growin’ thin.” While my friend had a point, I think Strummer’s yell is more a call for a musical paradigm shift. Lines like, “Now don’t look at us/ Phony Beatlemania has bitten the dust,” and, “London calling to the imitation zone/ Forget it, brother, you can go it alone,” call for individuality while also speaking to the Clash’s own artistic future. I’d also remiss if I didn’t mention Simonon’s growling bassline — one of the best sounds I’ve ever heard.

“Spanish Bombs” helps prove my thesis suggesting that most Spanish-language songs include the word “corazon.” Ginsburg and I both love this song’s references to the Spanish Civil War — a conflict conveniently omitted by so many high-school history books. Thankfully, the Clash laid it out straight: “The freedom fighters died upon the hill/ They sang the red flag […] After they died, it was Mockingbird Hill,” implies that, after the leftist forces were defeated, things seemed hunky-dory to the world. But Strummer calls for “the echo from the days of ’39/ With trenches full of poets/ The ragged army, fixin’ bayonets to fight the other line” — a call for revolution from artists.

This track stands as probably the most fun song on the album, yet “Rudie Can’t Fail” runs deep. The Clash had experimented with reggae since their eponymous debut, but this track showed their leanings more expressly than before. What you receive is a song dripping of sunshine and happiness, but it’s also a social statement: Some nameless authority criticizes a rude boy for how he leads his life, but the guy just wants to go and have some fun. It is funny that the Man tells him to “find a job in the paper”; what’s so wrong with that?

“There is nothing punk about this song,” Ginsburg said. Admittedly, there isn’t. “The Card Cheat” is more like a British Springsteen song than a true Clash song. From its regal piano, opulent production, occasionally martial drumming and lyrical paean to the British Empire, it’s everything you wouldn’t expect from the brashest band of the late ’70s — or any punk heroes. But a lot of punk is doing whatever you want to do without giving a damn what other people think. In that way, “The Card Cheat” might be the punkest song on the record. That’s what’s lovely about it.

Advanced pop culture: A survey of the tree of rock

Advanced pop culture: A survey of the tree of rock