I lost count of the number of times I’ve wanted less beer than the standard pour. I’ve been to places that require manager’s approval for a half pour, and even when a flight is available, if I decide I’m not in the mood for a particular beer or I don’t like it, I’ve paid for the remainder already.

For those of us who want freedom in our pour, there’s a solution. Mike and Mary Beth Horan found it when they were traveling in California last June — a bar where they could pour as much or as little as they chose. Inspired by the idea, they decided last September to open up a similar spot in downtown Greensboro.

The newly opened Horigan’s House of Taps on the corners of South Elm and Lewis streets offers self-pour taps for 40 beers and eight wines. It’s a blown-up version of the wine dispensing machines you’ll find at various bars and wine shops in the Triad. The difference is you don’t have to carry a preloaded card in your wallet and bring it with you to subsequent visits. Instead, drinkers get an elastic, adjustable wristband with an electronic button on it, which they link to either cash or card when they arrive and turn in before they leave to settle up.

Pouring is easy once you become familiar with the setup. Choose one of the styles of glasses from the shelf. Digital screens above the taps display the brand name, style, ABV, IBU and price per ounce. You can also view a description by tapping on the screen once, as well as instructions for how to pour from a tap. The display will soon show the suggested type of glass to use, Mike Horan said.

Once you’ve decided what to try, hold your wristband over the Horigan’s logo above the tap. When the light turns green, pour as much or as little as you’d like. I would’ve liked to have seen how much I was pouring as I was pouring it, but the number of ounces appears once pouring is complete. It also tells you how much you’ve poured total with that wristband.

Made-to-order sandwiches and appetizers are available, as well as wine by the bottle. Mary Beth Horan, a white-wine drinker, said she doesn’t like heavy reds, although they are prominent on the menu.

“We ask our distributor for advice and lean on people we know for guidance,” she said. 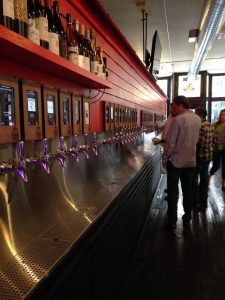 Her husband is the beer drinker, evidenced by the variety and rarity of the taps.

“We wanted to make sure we had beer for everyone’s taste,” he said. “Everyone seems to love IPAs, but we wanted a broad spectrum, things you can’t find everywhere else.”

I noticed kinds like Ommegang Fleur de Houblon Belgian pale ale and Charles Wells dry hopped lager that I haven’t seen elsewhere. I was happy to find Delirium Tremens and Great Divide Yeti stout. Natty Greene’s had a smoked IPA and Preyer a gose, though the focus right now is not on local brews.

Horigan’s, Mike’s college nickname and a play on the Horans’ last name, is the latest bar to move into the neighborhood, joining the relatively new Bearded Goat next door and Boxcar Bar & Arcade just a block away.

The place is cozy, with high ceilings, exposed brick and dark hardwood floors. The front windows give it a café feel, flatscreens offer sports lovers their fix and a small side patio provides some outdoor seating.

Originally from New Jersey, the Horans have lived in Greensboro for 20 years, raising three kids and getting to know the city.

“We love downtown Greensboro,” said Mary Beth, who’s an occupational therapist. “We know how it’s changed and grown, all the new parks and festivals. We’re excited to be a part of it.”

Brian Clarey - December 30, 2015 1
by Brian Clarey, Eric Ginsburg and Jordan Green We can measure a year in months and minutes, or mark the seasons as they go by. But...
Loading Comments...
%d bloggers like this: