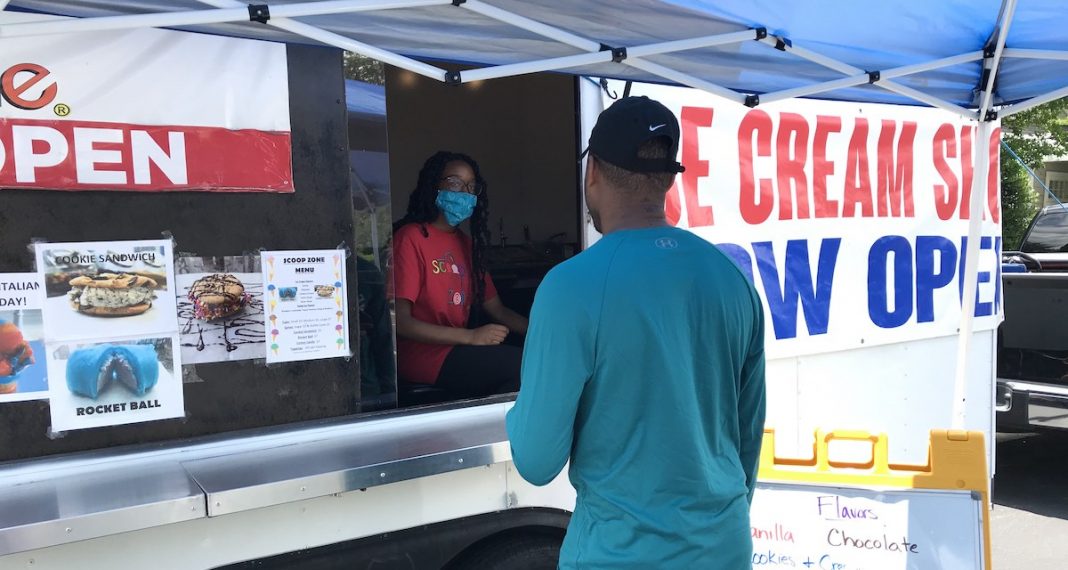 The first time was the worst.

“The festival called for over 10,000 people, and no one stopped,” Janee Jarrell said. She and her  husband Robert had filled their ice cream truck with products in anticipation of a big day, only to be disappointed when they didn’t sell. There was so much extra ice cream, the Scoop Zone owners decided to give it away for free. And people still did not stop.

They were the only Black-owned business at the event.

“It had no power steering, no air conditioning, no automatic nothing, but it had a freezer,” Robert said.

He researched and chose distributors for his ice cream, taught himself how to market and set prices, and “Rob’s Ice Cream Truck” was born.

The truck became popular with daycares and schools, especially after posting his website. This caused clients from Winston-Salem and even Charlotte to request Rob’s services. Janee loved the fact Rob owned an ice cream truck when she met him in 2015, and decided to join him in business. In 2018, they opened a brick-and-mortar Scoop Zone in downtown High Point. This past January, they decided to close the shop because it was no longer profitable and didn’t fit the vision they had and go mobile instead, basing themselves in Greensboro. The two love the convenience of being mobile as Violet, Janee affectionately calls the truck, allows them to travel to their customers. She named the truck Violet because it used to be purple, but she will call it “Drip Drip” after it receives the makeover she has planned in the near future.

A national pandemic might seem that it would negatively affect business, but not for Scoop Zone.

“During COVID, it’s actually taken off because we’re in their community. People don’t have to go anywhere,” Robert said. “We’ve really been more successful doing this during this particular time.”

He said the Black Lives Matter protests after the death of George Floyd increased business, too.

Robert takes over the window on Sundays, with Janee and their daughter Zahra in the window the rest of the week. Endless bowls of cookies and cream ice cream are served as it is the most popular flavor. It’s Robert’s favorite too, but Janee prefers the Italian ice. Kids enjoy the rocket ball, a ball of ice cream wrapped in cotton candy, the most. Ice cream is sold in a cup, cone, or cookie sandwich. A variety of toppings like sprinkles and chocolate chips are available, too. The most exciting thing about being business owners for the couple is having customers become like family. They enjoy seeing the shock and satisfaction on a customer’s face when their order is ready before they exit their car. One thing they want people to know about their business is simple.

Scoop Zone operates out of Greensboro but travels all over the state. Learn more about Scoop Zone on Facebook.