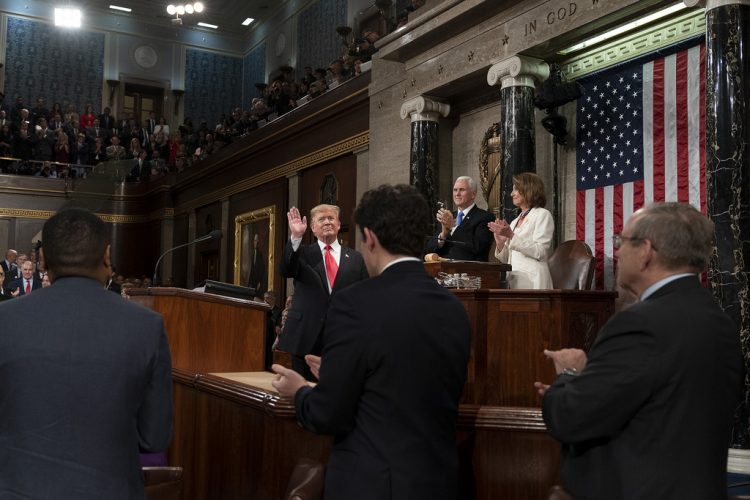 Tucked into the endless honor roll of ordinary Americans spotlighted during Trump’s State of the Union address, there was a neat symmetry between the survivors and heroes of last year’s Pittsburgh synagogue shooting and the Holocaust.

Even if you despised the man giving the speech, you couldn’t fail to feel tenderness and warmth at the sight of the gallery singing “Happy Birthday” to 81-year-old Judah Samet, who survived both the Holocaust and the massacre at Tree of Life synagogue, and then hearing Samet shout with all his breath: “Thank you!” Or feel admiration for Timothy Matson, the Pittsburgh police officer who ran into Tree of Life and suffered multiple gunshot wounds as he exchanged fire with the shooter. Still recovering from his injuries, he rose gingerly to accept the applause, but seemed embarrassed by the attention.

What better homily to antifascism could you ask for than Trump conveying how Joshua Kaufman, a Jewish prisoner at Dachau, told him: “The American soldiers were proof that God exists, and they came down from the sky; they came down from heaven.” And then to see Herman Zeitchik, a 4th Infantry Division soldier who helped liberate Dachau, rise with Kaufman’s gentle assistance to be recognized.

Here was a president whose paeans to American greatness co-opted a progressive message. Did he really pay tribute to “our unrivalled progress towards equality and justice”?

“Think of this capitol; think of this very chamber,” Trump told the white-clad Democratic women of the House, “where lawmakers before you voted to end slavery, to build the railroads and the highways, and defeat fascism, to secure civil rights and to face down evil empires.”

One of them, Rep. Alma Adams (D-NC), tweeted with penetrating clarity: “The theme of this speech has been, ‘Listen to my words and pay no attention to my deeds.’”

But also, pay attention to the core message. While hymning bipartisan cooperation on criminal justice reform and sharing an awkward moment with Democratic women lawmakers over Congress’ historic female quotient, Trump laid his hand on the table: Every bit of flattery and concession was deployed in service of the singular goal of Democratic capitulation on funding for the border wall — his monument to xenophobic exclusion.

“No issue better illustrates the divide between America’s working class and America’s political class than illegal immigration,” Trump said. “Wealthy politicians and donors push for open borders while living their lives behind walls and gates and guards.”

Trump’s core proposition is that the white working class must be willing to jettison interracial solidarity to secure the blessings of prosperity. It’s the same old white-supremacist bargain that elites offered white indentured servants in colonial Virginia in response to the threat of interracial solidarity represented by Bacon’s Rebellion.

Trump’s doctrine extends the offer to elevate the white working-class only on condition that black and brown people are punished. While the president inveighed against “wealthy politicians and donors push[ing] for open borders” and paid tribute to the “working class,” a carpet-cleaner named Eduardo Fuentes — an immigrant from Honduras — sat in the Forsyth County jail awaiting deportation after being detained on misdemeanor charges. He is the sole breadwinner for his young wife and their 2-year-old daughter. So much for lifting up the working class.

But, as Rep. Adams observed, Trump’s softened rhetoric is at odds with his actions.

“Legal immigrants enrich our nation and strengthen our society in countless ways,” Trump said. “I want people to come into our country in the largest numbers ever, but they have to come in legally.”

It’s strange to hear a president say that he wants “people to come into our country in the largest numbers ever” while placing new restrictions on migrants attempting to claim asylum and reducing the number of refugees allowed into the country. Likewise, the United States has issued fewer visas since Trump took office. And in August, Trump advisor Stephen Miller was said to be developing a plan to reduce legal immigration by making it harder for legal immigrants to become citizens if they’ve ever used public assistance.

It’s strange to hear a president say that he wants “people to come into our country in the largest numbers ever” while placing new restrictions on migrants attempting to claim asylum and reducing the number of refugees allowed into the country.

“Unrivalled progress towards equality and justice” sounds like the theme of the class of Democrats and moderate Republicans Trump scorched on his path to the White House. Forget for a moment that the claim rings hollow in a country that locks up a higher proportion of its citizens than any other and trails Liberia and Chile in electing weman presidents. It’s also not at all what the Trump administration is about.

A man who demonizes Mexicans as “rapists” and drug mules, who calls for a “total and complete shutdown of Muslims entering the United States” and who bans transgender people from military service is signaling to his followers that freedom is a conditional right, with its greatest privileges reserved for white, Christian, heterosexual men.

Is Louis DeJoy, the new postmaster general, hitting the ‘self-destruct’ button on democracy?

Another one bites the dust

Jordan Green - February 17, 2014 0
Election action: The second week of election filings opens today at boards of elections across the state, including in Guilford and Forsyth. Between now...
%d bloggers like this: