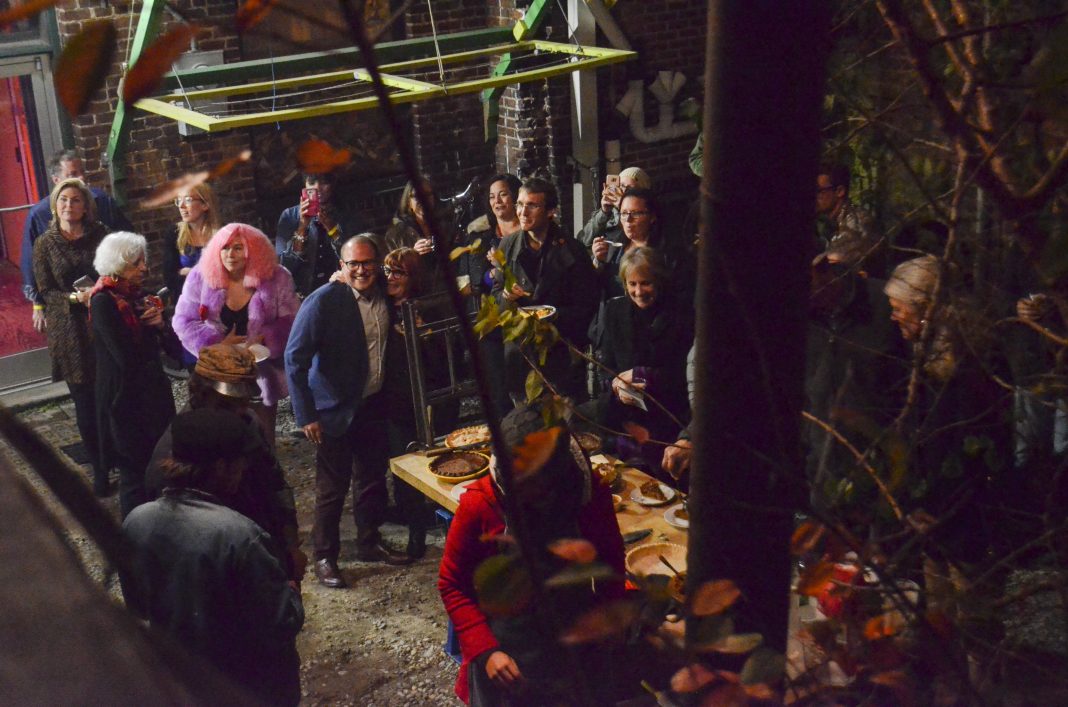 Colored lights bounced off of metallic bomber jackets and neon shirts in a dim room. Pop hits from Madonna and Prince prevailed. Xylophones and cymbals hung from tall bookshelves that stretched to the ceiling, where they met fabric scraps dangling down. All three floors of the Elsewhere Museum and former thrift store opened for its 10th extravaganza on a recent Friday, its rooms themed to the 1980s for the evening of time travel.
Creative Director Emily Ensminger said the theme varies for the extravaganza every year and serves as inspiration for dress and music. Performers also utilize the prompt for their own works.
“A lot of us were eighties babies,” Ensminger remarked.
The occasion showcases not just the era of synth and shoulder pads, but the museum itself. Each room of the building contains experimental sculptures and interactive installations.
The decade-old museum encourages people to, as artist Anne “the Wondercabinet” Weshinskey puts, “accept the abnormalities.”
Weshinskey herself carries an unusual history. Her background as a tightrope walker for a circus inspires her piece. She calls it “umbrella trauma.”
It made sense that she kicked things off. Though the night centered around the ’80s, the three floors hosting three simultaneous acts seemed like the rings under a big top.
After Weshinskey coated the tips of her socks in paint as red as her dress, she held a candlestick headstand. Then, using her dyed feet, she lifted a parasol up and spun it open. The pigment formed circles on the canopies of two umbrellas as she twirled them during her acrobatic routine.
By her own claims, she stumbled a few times, unnoticed by many audience members.
“The umbrellas are a little finicky,” she joked. “They’re like cats.”
Up a staircase sporting decoupage of paper cards and tickets, a distinctly different act commenced. A hallway lined with rooms of art exhibits provided an intimate space for Greensboro-based rap band Bad PPL Collective. The group, all in their early twenties, omitted the mic stands for the most part. Instead, they preferred to weave around the onlookers stopped in doorways and on either side of the small informal stage. The bass reverberated through the wooden floorboards as they rhymed.
After a year of giving shows, the band noted that their Elsewhere concert yielded a diverse atmosphere, in both the attendants and surroundings.
“We’ve never performed in a space with so much history,” singer-songwriter Elijah Rock said.
They noticed the quirky atmosphere maintained the momentum and allowed for genuine expression. Other entertainers shared this attitude.
“The energy vibrates off the walls,” a breakdancer by the name of B Girl Chaos mentioned, after her performance with the Raleigh Rockers ended.
Past a room brimming with ribbon, another staircase offered a rare glimpse into the museum’s third floor. A lounge flooded with blue lights hosted a bar, where partygoers ordered cocktails inspired by Beetlejuice or The Breakfast Club.
After dancing and teaching a workshop, Jaleel Cheek of voguing duo the Twinz sipped a Pretty in Pink, a drink that mixed spiced rum and bourbon with cranberry, lemon and rosemary. Cheek delighted in how vogueing, with its rich past, is “expanding to all genres of people.”
“It opens up an underground world of art and dance,” he excitedly rambled. Like many of the performers, Cheek’s craft harmonized well within the context of the museum, and not just during a celebration such as this.
Cheek pointed out, “Art can be anything.”

Eric Ginsburg - March 4, 2014 0
Breakdancer Nikki Freedom has something to share with you. This video, taken Sunday night, shows him and a small group of dancers taking over a...
%d bloggers like this: