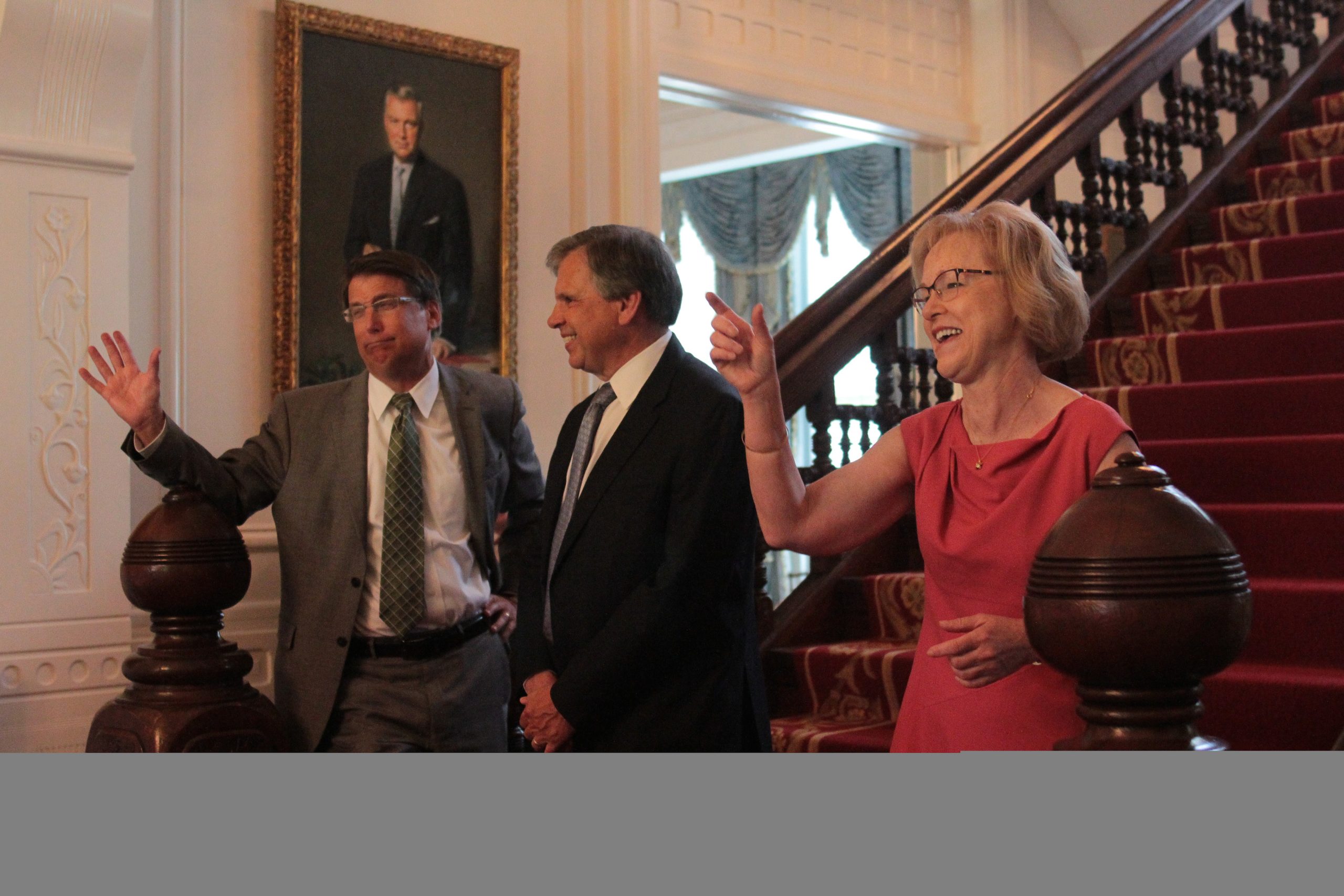 Swear to god, I did not intentionally walk into a closed event at the Executive Mansion, just showed credentials and was waved on in a minute or two into an enthusiastic speech by Department of Health and Human Secretary Aldona Wos before 50 or so medical professionals, officials of various medical societies and a nice assortment of lobbyists.

Standing a few stairs up the grand staircase — really, it’s pretty nice — alongside the governor, Wos was whipping up the crowd in the fight between the administration and, for now, the state Senate over what to do about the state’s Medicaid system.

This event came barely a day after Wos, Gov. Pat McCrory and State Budget Director Art Pope sent out an email acknowledging a new, rather large hole in the budget owing to a move by the federal government to block a state strategy to tap $60 million in additional funding.

It was yet another blow to DHHS and Pope, who in an understated but certain way laid the blame on advice of consultants hired by the department. You have to wonder if these were the same high-dollar consultants Wos defended last year saying they had saved the state millions.

We’ll find out soon enough. This week, the legislature’s Program Evaluation Oversight Committee got a preliminary report that showed apparent widespread non-compliance in the way the department has handed out contracts, with 21 consultant contracts let without following applicable state laws. The committee agreed to look into some of the concerns raised in the report and asked State Auditor Beth Wood to dig into the rest.

As to the Medicaid savings strategy dreamed up by some those consultants: There’s an odd contradiction. It emerged from an administration whose primary arguments against Medicaid expansion under the Affordable Care Act included forcing fiscal discipline on Washington by refusing its money. How that jibes with a Medicaid shell-game strategy is beyond me. The feds saw it for what it was and said no.

If you’re wondering if all this spells danger for the energetic Secretary Wos, you are way wrong. Both in his casual remarks on the staircase and later outside to a sweltering press corps, the governor was effusive in his praise for Wos. He gushed, called her brilliant and full of enthusiasm. She beamed and seemed to agree.

Asked about the newly-missing $60 million, McCrory said heads would certainly not roll and blamed the error on the federal government’s thwarting of a perfectly reasonable attempt to draw down North Carolina’s due.

He also downplayed the damage and all but called the $60 million pocket change. The governor correctly pointed out that it is a minuscule amount compared to the overall state budget. But as tiny an amount as $60 million is, it could help cover the $29 million cut by the Senate elsewhere at DHHS that would end Medicaid eligibility for nearly 12,000 bind, disabled and elderly North Carolinians. You could do that and have enough spare change remaining to cover the salaries of 1,000 teaching assistants.

Whether we end up with the governor’s plan, the Senate’s or whatever hybrid the House approves this week, the ultimate destination of any argument over Medicaid is expansion under the Affordable Care Act.

North Carolina is one of 20 holdout states refusing expansion. Last year, it was one of 28. Next year, it will be one of 16, maybe less. Even deep-red states are starting to read the writing is on the wall.

As more results roll in, the weight of evidence will drag state after state into the horrid abyss of greater access to affordable healthcare for their citizens.

The latest metrics come from a Colorado study that looked at effects of Medicaid expansion nationwide and drilled down to a state level how it’s changed the dynamics of healthcare. Yes, Medicaid payouts went up, but as more people signed up more payouts went for preventive care.

It also caused an average 30 percent reduction in the cost of charity care in the states that expanded in just the first year. The average amount each hospital paid out in charity care dropped from $2.8 million to $1.9 million.

Thirty percent is a huge amount in a state this size, which in the next year or two could see annual charity-care costs top the $1 billion mark. UNC Hospital in Chapel Hill alone spent $173 million treating charity patients in 2013. Wake Forest Medical Center spends more than $60 million annually. You can imagine what a 30 percent drop in those costs plus dealing with patients who’ve had decent preventive care could do the bottom line of not just the big hospitals, but the dozens of smaller, struggling medical centers around the state.

If the governor and the legislature want to deal with Medicaid, then they ought to do an honest projection of expanding it, using the real on-the-ground experience in Colorado and other states.

My bet is one fair fiscal note, stripped of politics and spite, could seal the deal.

Is Louis DeJoy, the new postmaster general, hitting the ‘self-destruct’ button on democracy?

Joel Sronce - February 1, 2017 0
On a brisk Friday morning, more than 100 opponents and a couple dozen members of the media attended a press conference in Greensboro’s government...
%d bloggers like this: