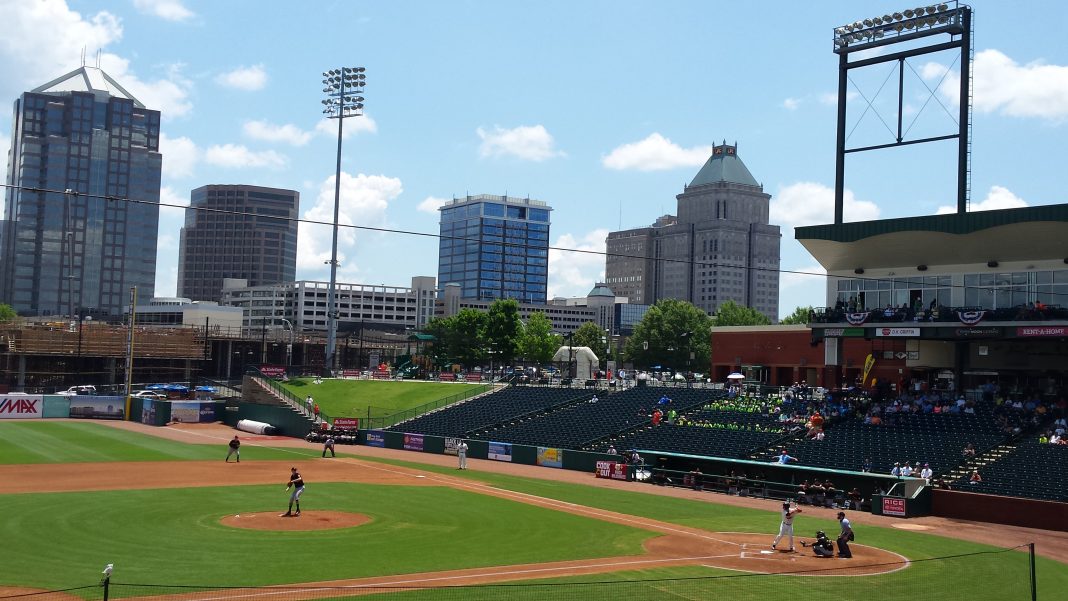 Greensboro Grasshoppers third baseman Aaron Blanton represents an anomaly in the stat-driven world of baseball. When he stepped up to the plate in the bottom of the fourth inning in the Hoppers’ afternoon matchup against the West Virginia Power on July 6, he held a mediocre .190 batting average on the season. Even if it’s steadily on the mend from earlier in the year, that metric alone doesn’t do him many favors in his hopes for climbing the minor-league ladder.

But hitting isn’t just about that aggregate. He’d slammed five homers and batted in 25 runs. While batting has sometimes symbolized baseball’s utmost selfishness, Blanton hits for his team.

With a runner on first and two outs, the Hoppers needed him to pad their 1-0 lead: They were trying to extend a solid winning streak.

The Hoppers are doing their best since 2012. When Blanton stepped up, they led the second-half North Division standings with a 10-3 record. They’d swept the Lakewood BlueClaws in a four-game away stretch and beaten the Power twice in a row at home.

Even this early in the second half of the season, a six-game streak promised a bright future for Greensboro.

Of many different records and statistics in all of sports, streaks rank among some of the most impressive. Many casual baseball fans can recall Joe DiMaggio’s hitting streak of 56 games in 1941, one record most believe will never be broken. None thought Lou Gehrig’s games-played record would be broken, yet Cal Ripken Jr. went ahead and started in 2,632 straight games, surpassing the Iron Horse by 502 appearances.

But there are others not so well known.

The 26-game unbeaten streak posted by John McGraw’s 1926 Giants stands as MLB’s unofficial record; somehow, they didn’t even make the pennant race, finishing 74-77. A single tie keeps those Giants from holding the longest true winning streak. That honor goes to the 1935 Chicago Cubs — yes, of all possible teams, the Cubs — who won 21 games in a row and won the National League pennant; they’d lose the World Series to Hank Greenberg and the Detroit Tigers.

The 1987 Salt Lake City Trappers of the Pioneer League went on a 29-win tear through the minors. Sports Illustrated covered their extraordinary run and, funnily enough, they were partly owned by beloved, eccentric actor-comedian Bill Murray. The team no longer exists; their franchise lives on as the Ogden Raptors. But their legacy endures: Memorabilia from the Trappers’ historic season hangs in Cooperstown at the Baseball Hall of Fame.

So many elements go into a winning streak, especially in multifaceted games like baseball. The bullpen plays a pivotal role; pitchers, as leaders of the defense, must shut down batters game after game. No-hitters and perfect games come only once in a blue moon, though, so the rest of the team must remain on point with their fielding to keep those on base from scoring. And, naturally, a streaking team must score efficiently. You must get hits.

So, we return to third baseman Blanton in the batter’s box, underneath the hot July sun.

The first three innings had seen three up, three down for West Virginia. Power centerfielder CJ Hughston finally singled in the top of the fourth and stole second, but Blanton tagged him out at third to end that half. Similarly, Greensboro struggled to reach scoring position; double plays stifled the Hoppers’ efforts in the first and second innings.

But the home team took the offensive in the fourth. Centerfielder John Silviano drilled deep toward the left-field fence, and the outfielder bobbled the catch, putting Silviano at second. He got to third on a wild pitch with catcher Roy Morales at the plate. After Morales and rightfielder Isael Soto grounded out, second baseman Justin Twine batted in Silviano with a hissing grounder between short and third base, leading to Blanton’s turn at bat.

Power pitcher Gage Hinsz first threw a ball. Then, he caught Blanton swinging twice. But you could tell Blanton was aiming for the fences given his enormous effort on each. Blanton found himself doing risky business. A 1-2 count grants the pitcher plenty of leeway.

Hinsz went for the kill, and Blanton took the gamble.

And his hit soared high and deep, over the left centerfield fence, a two-run homer.

Greensboro didn’t see any other screamer hits, but the Hoppers’ hurlers shut out the Power with support from infield talent like rocket-armed shortstop Anfernee Seymour. Greensboro’s streak had grown to seven games.

When the Kannapolis Intimidators came to town for a four-game stretch the following day, the home team won the next game. Storms suspended the completion of the July 8 follow-up, but the Hoppers cleaned up when play resumed the next afternoon. Nine wins in a row, knocking on double digits.

But all streaks come to an end: Kannapolis shut out Greensboro and scored a single run in the July 9 evening game. Then, the Intimidators made good on their name and squashed the Hoppers 10-4 on Sunday.

But I wouldn’t cut Greensboro out of the running for the second-half title. The Hoppers are running hot.

Anthony Harrison - July 8, 2015 1
by Daniel Wirtheim Addam’s University Bookstore closed in March of last year, after a 25-year run. To anyone who remembers Maya or Design Archives (maybe...
%d bloggers like this: