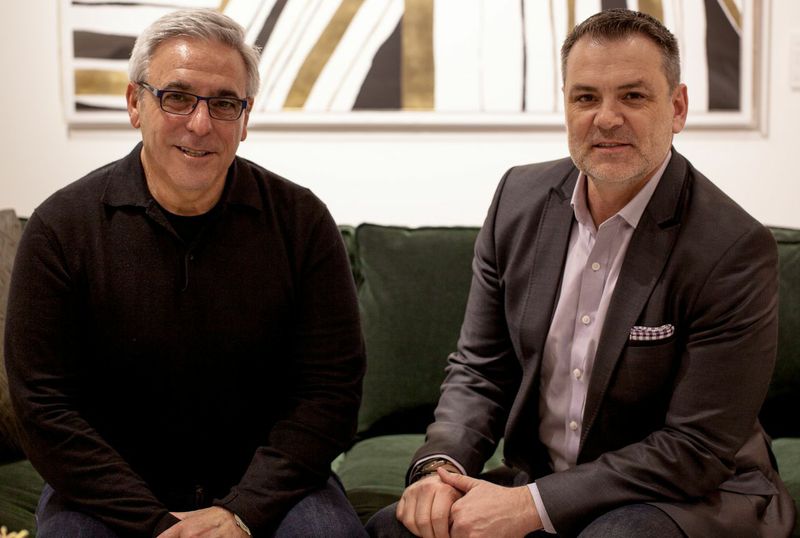 Mitchell Gold and Bob Williams, who manufacture furniture in Taylorsville and own a showroom in High Point, are significant players in the campaign to engage religious conservatives on LGBT rights.

Furniture magnates Mitchell Gold and Bob Williams stepped through the glass double doors into the lobby of the showroom they own in High Point like magnanimous royalty.

A middle-aged female visitor eagerly grasped Gold’s hand and shared some news about a young relative who was showing extraordinary academic promise.

“Your namesake is in medical school, and he’s in the Top 5 percentile of his class,” she exclaimed.

“He doesn’t take after me then,” Gold laughed, “because I certainly wasn’t in the Top 5 percentile of my class.”

Twice a year, Gold and Williams’ base of operations shifts from Taylorsville, a small town in the Blue Ridge foothills where their furniture company is based, to High Point, where they own a tastefully appointed one-story showroom to market their product to international buyers.

The two men’s very existence would seem to be a rebuke to the conservative state lawmakers in Raleigh who are contemplating so-called “religious freedom” legislation that could give legal sanction to discrimination against gays, while also claiming to prioritize economic growth.

“Bob and I met in 1986 and fell in love,” said Gold, a New Jersey native who had previously worked in purchasing for Bloomingdale’s furniture division, “and we wanted to have a furniture business.”

They moved from New York to North Carolina in 1989, and bought a house in a neighborhood full of families in Taylorsville. In hindsight, Gold said, they perhaps didn’t appreciate the depth of homophobia and its roots in the conservative religious culture of the state.

Still, theirs is an unvarnished success story, with little indication that bigotry has hampered their growth. After all, they now employ more than 700 people. Gold said the company may have lost a small number of customers who are not comfortable with their sexual orientation, but they’ve encountered few difficulties with suppliers. Gold said many of the company’s suppliers are Southern Baptists who subscribe to conservative political views, but seem to be able to justify doing business with Mitchell Gold + Bob Williams through a philosophy of “Hate the sin, love the sinner.”

The rare occurrences of outright bigotry almost always catch the couple off guard. “We had rented a house in High Point one time for furniture market,” Gold recalled. “Afterwards, you always call them to go over some things, and I said, ‘We’d like to rent from you again for year’s market.’ She said, ‘I’m not interested in renting to your kind.’ I wondered: What is our kind? But I guess she realized Bob and I shared the same bed in the master bedroom.”

Gold and Williams firmly believe that getting to know people who are gay helps break down prejudices, but their company’s position in the local and regional economy certainly doesn’t hurt.

“We’re the biggest employer in the county,” Gold said. “We have the best healthcare plan of any employer in our area. We have a health-conscious cafeteria. We have a college scholarship program for children of our employees. If you work for us and happen to get sick, you’ll be taken care of. It’s hard to dislike us.”

Gold’s profile as an advocate for LGBT rights has risen in recent months with an appearance on NPR’s “The Diane Rehm Show” and a mention in an Easter weekend column by Frank Bruni in the New York Times. But Gold and his partner’s activism as outspoken proponents of engaging churches on the issue of LGBT rights goes back at least to the 1990s, when President Clinton considered the possibility of lifting the prohibition against gays in the military and they became aware of deep-seated, religion-based homophobia in rural North Carolina.

Over the years, Gold has leveraged his intellectual capital and economic clout to make some significant conversions. Crisis: 40 Stories Revealing the Personal, Social and Religious Pain and Trauma of Growing Up Gay in America, edited by Gold and Mindy Drucker, was published in 2008. Following the publication of Crisis, Gold arranged for CNN News personality Soledad O’Brien to interview him at forum at Lenoir-Rhyne University in neighboring Hickory, which drew about 1,100 people.

“I want people to stop being complicit in the harm that is caused by outdated, misguided and ill-informed religious teaching,” Gold told the audience.

His appeal made an immediate impact, Gold said, when an editor at the Hickory Daily News who was in the audience published an editorial calling for the lifting of the military’s “don’t-ask-don’t-tell” policy. (Congress repealed the policy in 2010.) And a pediatrician who had worked with many gay teenagers haunted by thoughts of suicide founded an organization called OUTright Youth of Catawba Valley after hearing Gold’s talk.

Gold also won a key ally in the black church and the civil rights movement when he met with the Rev. T. Anthony Spearman, a pastor in Hickory who serves on the board of the North Carolina NAACP.

“He told me he was never anti-gay, but also had never been supportive of gay rights,” Gold recalled. “He counseled five or six young people, and he realized that the reason they were so crazy is because they were gay and having to deal with people telling them that they were sinners because of their sexuality.”

Gold said that prior to the 2012 campaign to defeat the marriage amendment, the Rev. William Barber II, president of the state NAACP, had refused to meet with LGBT leaders. Gold credits Spearman with bringing him around.

“He is really the one who talked to the Rev. Barber and moved him from being anti-gay to pro-gay,” Gold said. “The Hickory Daily Record had a front-page picture of me and the Rev. Barber talking about gay rights. We’re a big advertiser.”

Growing up gay and Jewish in New Jersey, Gold developed sensitivity to bigotry of all kinds.

“I grew up the recipient of bigotry; I was Jewish in a town that had a population that was only 4 to 5 percent Jewish,” he recalled. “I became sensitized to bigotry by observing how black people were treated. And even though I didn’t grow up being taught I was a sinner, I saw how it affected other people. I remember seeing George Wallace on TV saying, ‘Segregation now, segregation forever,’ and then hearing him go on to say, ‘It says so in the Bible.’ I asked my mom: ‘Does it really say that in the Bible?’ She said, ‘Not the Bible we read.’”

He added that the seven verses of the Bible that purportedly condemn homosexuality actually address entirely different matters.

The most radical personal changes often occur when someone who believes homosexuality is a sin, Gold said.

“We’ve had employees who have been empowered to come out,” he said. “We had an employee who came to me and said her daughter came out. She said if she didn’t work for us and didn’t know that we were gay, she wouldn’t have been able to accept it. I think sometimes just knowing a gay person and knowing we’re normal human beings is what makes the biggest difference.”

Citizen Green: This country belongs to us, too

Citizen Green: Giving thanks to those who enlarge the space of freedom

Opposition to HB2 puts a ‘dent’ in furniture market attendance

Anthony Harrison - July 1, 2015 0
by Sayaka Matsuoka 1. Extended LGBTQIA rights While the recent Supreme Court decision is a huge milestone for gay rights, it also serves as a reminder...
%d bloggers like this: