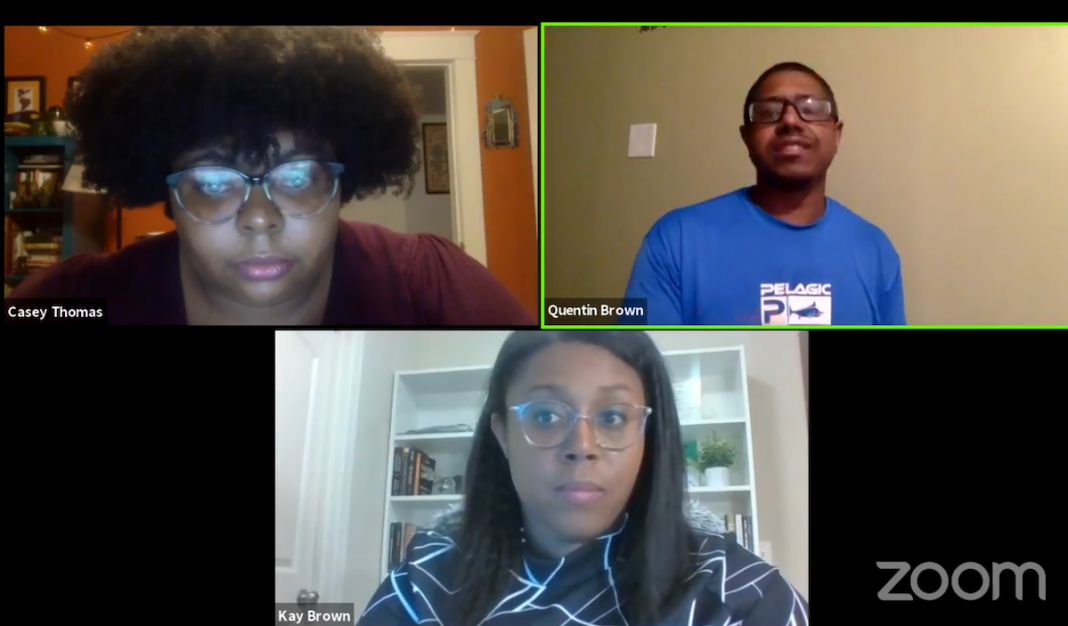 The meeting was supposed to be an hour and a half long.

On Thursday evening, the Greensboro Criminal Justice Advisory Commission met via a public Zoom call to discuss recent demands from community members for police reform and abolition. The commission, which was formed in 2018, typically meets on the third Thursday of every month and drew increased attention this week because of the recent killings of unarmed black individuals by police and the worldwide protests that have followed.

“GCJAC is here to be a voice for the community,” said Jaye Webb, the chair of the board and the representative for District 1. “We are here to have meaningful dialogue between the community and law enforcement.”

After Webb and District 2 Commissioner Kay Brown outlined GCJAC’s responsibilities, the meeting was handed over to Greensboro police Chief Brian James, who answered questions from the community regarding department policies and concerns about police brutality.

James, who touched on the 8 Can’t Wait campaign adopted by the Greensboro city council, spent most of his time relaying information that he had previously outlined in a June 8 press conference. In the conference, James announced that the Greensboro Police Department doesn’t train its officers to use chokeholds or strangleholds and prohibits any restraint or use of force which restricts breathing, according to a WFMY article. James also clarified that the department modified its policy to strictly prohibit these methods and reduce other uses of deadly force. The department also modified its policy to require officers who witnesses an excessive use of force to intervene either verbally or physically and to notify their supervisors.

As James outlined the updated policies, dozens of members of the public commented in the Zoom chat about demands from community coalitions such as Greensboro Rising about ending arrests for marijuana, changing how LGBTQ+ individuals are treated by officers and making police get written consent for searches. Before James could answer many of the questions however, the meeting was cut short by Webb who abruptly ended the call after about half an hour.

“At the beginning of the meeting it seemed like they were trying to be transparent and work with the community about our needs and the concerns,” said Tyler Walker, a Guilford For All member in a statement to Triad City Beat. “But due to the abrupt way that they shut us down, I got the distinct feeling that we were actually getting lip service, and that we wouldn’t actually experience real change.”

Afterwards, Casey Thomas, a member of Guilford For All, a community coalition, hosted a debriefing conversation via Facebook Live with Kay Brown and Quentin Brown, another GCJAC commissioner. Kay and Quentin are not related.

“What you got was a small taste of the frustrating meetings that we’ve been a part of for the last two years,” said Quentin Brown, who also represents District 1. “We really didn’t answer anything… which is about how our hour-long meetings go.”

Despite the brevity of the previous meeting, Thomas’ conversation with the two commissioners gave insight into how the commission has been running from the beginning.

“I am willing and ready to be held accountable… but I can’t be the only voice in the room,” Kay Brown said.

Kay Brown and Quentin Brown spoke for an hour about their time on the board and how for years, they have not been able to achieve many of the goals that community members are now asking for.

“You need to have a board that has the ability to get rid of people,” Quentin Brown said. “There’s a high level of nepotism in the GPD…. Up until George Floyd, no one really cared what we were doing. We were taken kind of as a joke. Now, they have to listen to us.”

At one point during the debriefing, Kay gave insight into how and when the commission gets access to materials from police case files.

“We can only look at cases from the purview of what internal affairs have given us,” Brown said. “So that means if someone is 18 and their friend took a video of something that happened, if internal affairs chooses not to put that into the case file, we cannot even look at it. Not only can we not look at it…. I can’t even speak out about it. I can be sued…. we need the whole state accountable for that. The whole PCRB not having teeth? The state’s accountable for that.”

Quentin Brown and Kay Brown said the city needs to implement written consent for police searches and changes to decriminalize marijuana so it’s not used as reasonable suspicion for searches.

Kay Brown said written consent needs to be enshrined in an ordinance approved by city council and not just a department-level policy.

“When the council passes ordinance, then it’s up to the police chief to execute on what that is,” she said. “But when you have people who are supposed to be executing and they’re the ones that are in control with what the rules, policies and procedures are, even if you have a good chief, let’s say in seven years you get a crappy one, all of the years of work that you did to fight for with the first chief is now moot if they decide if that is a directive that they no longer want to have.”

Quentin Brown likened asking police to discipline themselves to asking a toddler to give himself a whooping.

“That doesn’t make any sense,” he said.

Asked by Thomas and others in the comments section, both commissioners outlined what community members can do to empower the committee to make the changes it sets out to do.

Thomas agreed, stating that the real change comes from having hundreds of people speak out for what they want their communities to look like, much like the overwhelming attendance that was seen during the GCJAC meeting that was cut short.

“I think that one of the things that people should look at is building permanent people power,” Thomas said. “There’s a certain type of accountability that police officers and elected officials understand and they don’t always understand, ‘Please, no.’ They need to have that black parent, ‘I brought you into this world, I can take you out and make another one that looks just like you.’ And that’s kind of the power that having a base-building organization like Guilford For All is working towards.”

Rules for cops: 8 Can’t Wait and use-of-force policies in Triad...