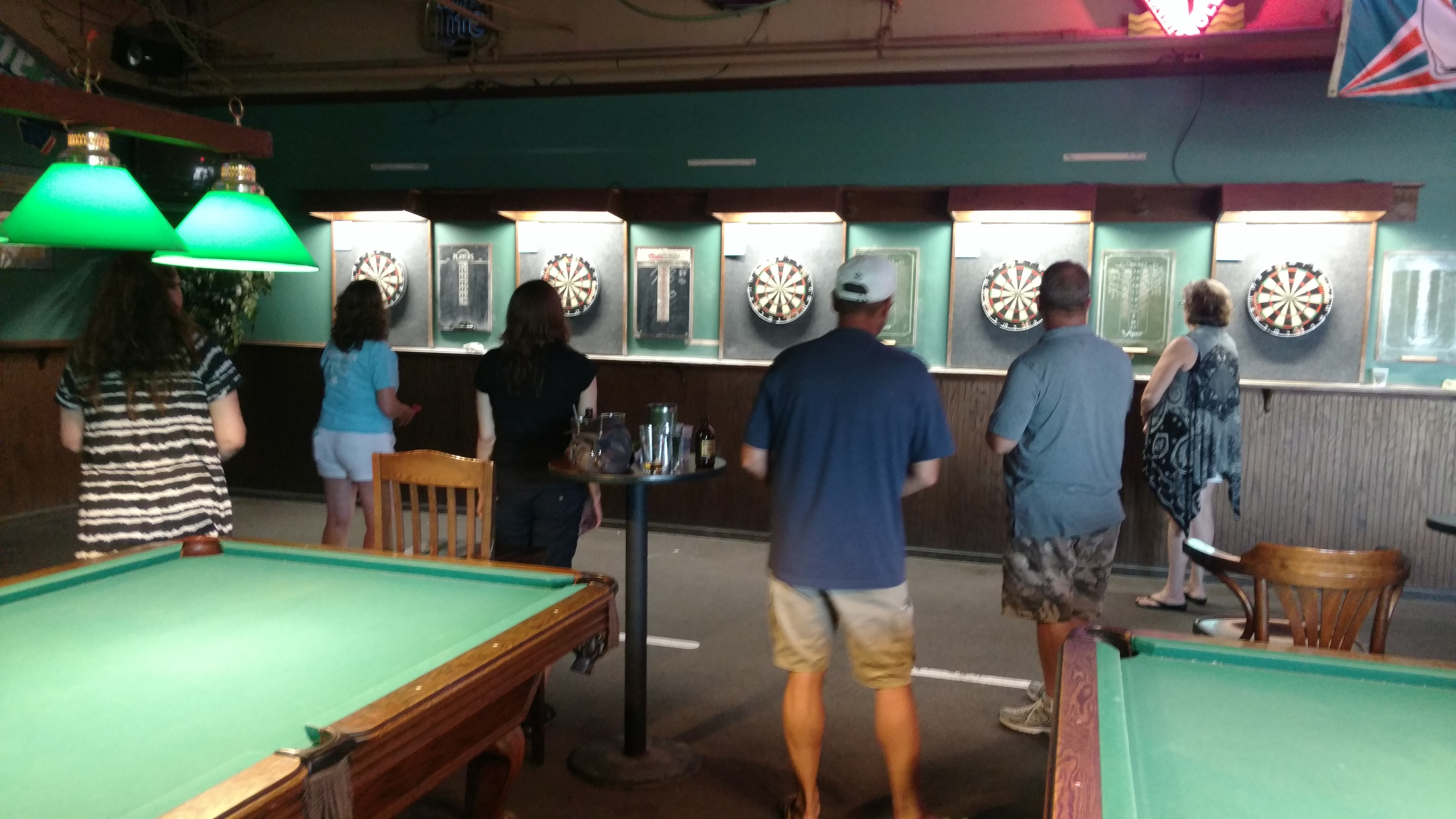 Kristen King could win it in one throw. From a distance of just under 8 feet she needed to hit a short red arc only a few centimeters wide. She had three attempts to end the game, but then so did her opponent, Jennifer Hill.

In the Ladies’ Singles 501 Final at the Piedmont Dart Association Championships on July 15, both contestants began with 501 points. Each successful hit knocked the corresponding points from a player’s total, and the first to reach 0 — exactly 0 — would win.

But 501 is a double-out game; players could only emerge victorious through a direct hit into the thin doubles track that rings a dart board’s wedges.

King had narrowed her score to 40 points. She aimed for the small stripe designating double 20 at the crest of the board, ready to end the game with one of her three throws.

The Piedmont Dart Association — a member of the North Carolina Dart Organization — was formed in 1978 to organize and promote darts around the Triad. According to current association President Brian Lee, the group draws members within an approximate 25-mile radius from Colfax — an area that reaches Lewisville to the west, Lexington to the south, Burlington to the east and envelopes the Triad cities in between.

The July 15 contest at Players Sportsbar & Billiards in Greensboro marked the association’s 32nd Championships. Yet unlike their league-play — a 27-team, 16-week season across four skill levels — the championships were a separate event that actually involved less pressure and competition.

“Today you get mostly bragging rights,” said Nancy Coley, who has been a member of the dart association since 1981.

Miss. Miss. Miss. All of King’s shots hit just barely too high, lost to the black vacancy that rims the board.

Hill stepped up, sporting a score of 30 points. She aimed for the double 15.

Miss. Miss. Her first two attempts pricked wide into the black void. But her third throw landed in the 2 — the slice of circle just below the 15. Hill ended her turn with 28 points remaining.

Eleven boards hang on the walls of Players, a weathered sportsbar that ends a short row of businesses on West Market Street. Though the sight of dart boards mounted on barroom walls might not often demand much consideration, their positions must be precise for serious dart competitions.

“The hypotenuse is the true distance,” Lee said. “Many of the floors can be uneven.”

The sport’s short channel of play validates the game’s precise geometry, but surprisingly the players’ approaches to their release vary.

“Every single person up there has a different stance,” Coley said. “Some people like to have both feet straight, but most stand with their [favored] foot forward.”

Coley discussed how different throwers place their feet, the importance of balance, the angle of the front foot to the throwing line, the tilt of the back foot, and how some players shift completely after each release.

“There is no right and wrong,” Coley said.

King returned to the throwing line. Her first throw missed high, but her second hit the double 1 — the notch beside the double 20 — bringing her score to 38. She now re-aimed for the double 19, but hit its neighbor, 7, to the left. She ended the round at 31 points.

“Part of this game is messing yourself up,” Lee whispered. “ Now [she can’t win] in one throw.”

For the members of the dart association, the game fulfills a social desire for community and camaraderie more than anything else. But there are a couple other aspects that keep them coming back.

“As soon as you throw a dart that goes exactly where you wanted it to, you want to do it again,” Coley theorized.

Hill stepped back up and hit the double 14 with her first throw, bringing her score to exactly 0. The first round was over.

King then returned to the line and whipped a throw at the board, intentionally but effortlessly. Bullseye: She’d start the next round. Best two out of three.

On a pool table in the middle of all the action, Coley had set out 12 trophies for the winners of all the singles and doubles events. Beside the awards, Coley laid out dozens of sheets of paper with the results of each championship over the past years.

“I put these out each year just so people can come look and say, ‘Where does my name appear first?’” Coley explained.

In the earliest recorded results — January 11, 1986 — the winners of the Ladies’ Doubles 501 Final were Karen Kirk and her partner, Nancy Coley.