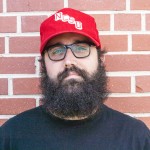 I had the perfect column in hand — a mix of hometown pride and current town intrigue. Southern Guilford High School football threw it all away.

I’d like to believe that they knew my article would be immaculate. They had the juggernaut Havelock High School — the town where I spent my formative years — and the playoff semifinals in their sights. They lead Eastern Wayne High School 29-14 heading into the fourth quarter. I kept up with the game, writing the preamble to my greatest deadline work in history.

Then I received a subtle reminder that these were kids. Southern Guilford allowed 35 points in the fourth and lost in OT.

No lead should have swelled my confidence. No undefeated record should have fooled me. If I learned anything from cheering for any team in my sordid history, I should have learned that you never smile until that final whistle.

My father taught me that.

He raised me on some lean teams. We watched some of the worst teams in history trudge through lost seasons, give away massive leads and sleep through big games.

Since then, Havelock High School cruised past Eastern Wayne, 35-12. And they will play in the championship game in Raleigh this weekend. Remarkably, I knew this would happen. Not because I keep up with any iteration of high school sports, but because I had heard for the better part of my formative years that if Havelock had any kind of coach, they’d win championships every year.

See, my dad coached middle school sports for a number of years. Because of his disrespectful attitude toward authority — authoritarians often labeled him “an asshole” — he never rose to any prominence. Still, he coached well. Going through his scorebooks one night, we calculated his record as a basketball coach as 199-80 before Havelock Middle School replaced him in the 1990s.

In the rare instances he went to see his old players play at the next level, he left disgusted. He blamed the high school for leaving behind good players because no one wanted to help them. He blamed the slow-down system that coaches used in all the sports he watched. In his mind, Havelock’s notoriously bad teams didn’t lack talent or smarts. They lacked leadership.

All the fence-leaners — those glorious old men reliving their high school glory every fall Friday — would light up when my dad showed up to grouse about how poorly the teams played.

“You got a bunch of kids who win track meets out there and the coaches want them to stand in a circle and play catch,” he used to say. He’d sigh and shake his head damn near every time. Then the faraway stare would take over.

Of course, I didn’t believe him. I saw the scores — any team with a decent roster destroyed our football team. They were hapless, year after year. What coach could help this team?

Enter Jim Bob Bryant. He inherited a team that went 13-32 over the four previous years and produced champions. I don’t mean that in the “on and off the field” way, either.

I mean, Bryant immediately instilled a no-huddle, spread offense and ran every team in Havelock’s conference off the field. I mean, his teams have won three straight state championships. And on Friday, they’ll play for a fourth.

He’s lost only two games in three years — both to New Bern High School by a combined five points. New Bern won the 4A state title last year and will appear in this year’s championship game as well.

Unfortunately, Havelock will play for that fourth ring against Crest High School out of Shelby, a semi-faraway town that lends nothing to this article. Southern Guilford may not have challenged Havelock, much like Eastern Wayne, but I get the feeling they would have shown the standard-bearers a fight.

Meanwhile, if I stood near my father’s grave, I’m sure I could hear his head nodding gently against the vase we put him in a few years ago. Probably for the best — a lot of those authoritarians were correct. He was an asshole.

Especially when he happened to be right.

Maybe I’ll be at the 3A state championship game for the fourth year in a row, maybe I won’t. Either way, I’m the proud legacy of a man who knew exactly what he spoke of — even if he died before his point hammered home. If there’s one thing I’ve learned, it’s that the final whistle stops nothing: the perfect season, the perfect matchup, the perfect column.

That final whistle just picks winners and losers. And for the first time in a long time, my old stomping grounds haven’t been caught on the wrong side of that line.

Good Sport: From the visitors’ side at Grimsley-Page

Good Sport: From the visitors’ side at Grimsley-Page

Jordan Green - October 21, 2015 2
by Anthony Harrison When I got to Page High School in Greensboro on the chilly night of Oct. 16, I wasn’t necessarily concerned with the...
Loading Comments...
%d bloggers like this: