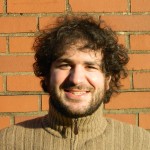 The recreation pool at the Greensboro Aquatic Center is a neutral zone. The walls are whitewashed, with wide windows allowing stale, pale-blue morning light. It doesn’t even really smell like a pool — the sharp, metallic smell of chlorine doesn’t hang heavy in the air.

The most dynamic thing about the GAC is the noise. The air conditioning hums in a loud roar. Along with that constant grumbling are the splashes of people flopping around in the water.

But swimming for fitness is anything but boring. It’s one of the hardest, most intense workouts you can endure.

I went to the GAC on April 4 for its 2015 Water Fitness Extravaganza, an open house featuring aquatic fitness programs and showcasing new equipment.

According to Leanne Stone, the GAC’s program coordinator, the extravaganzas are typically the highlight of their open houses.

“Normally, we have about 20 to 30 people just here for the fitness events,” Stone said.

This one was a bit slower than that.

The competition pool — a cavernous temple to the glory of water sports — was fully occupied by the tag end of the YMCA’s national short-course competitions; they were running long-course time trials.

The rec pool — a warmer, smaller side chapel — was lower key. A single lane was open for lap swimming; an old man swam freestyle at a leisurely pace. Lifeguards from Wet’n Wild engaged in their pre-season training, learning how to strap swimmers into water-rescue stretchers.

At the other end, adjacent to the lifeguards and their hammy acting, were six women, slowly jogging toward the halfway mark of the lanes.

Stone blamed the low turnout partly on the national tournaments.

“Every weekend, we have something,” Stone said. “We pulled this together on last-minute planning, and sent out invites on Facebook.”

The sparse attendance didn’t dull the enthusiasm, though, either on the part of the participants or the instructors.

The Water Fitness Extravaganza consisted of a few 20-minute demo sessions of water aerobics with three GAC staff members. Each session and its corresponding instructor varied wildly in character.

The first teacher took the six women through the first round of high-intensity aerobics. Her phone was connected to a medium-sized speaker pumping up-tempo techno music. The trainer energetically shuffled and kicked on the beat. She punched with foam dumbbells, simultaneously lifting her legs until she practically kneed herself in the stomach.

“Last one!” she eventually said. “We’re going up to Level 3! Keep that core tight!”

“Oh, Lord, Lord,” one of the women moaned in anguish.

The techno teacher had the force and fervor of a drill sergeant; at times, she was even goose-stepping.

The second instructor was a little more relaxed.

“I’m pretty easygoing, if you haven’t figured that out,” she said to the first instructor. “The only time I get upset is when kids leave food everywhere.”

Her workout soundtrack was composed of pop songs: some Taylor Swift, Pharrell’s “Happy.” Her regimen was not as strenuous as the first, but it still seemed difficult.

One of the memorable moments came when she brought out a water noodle — those long foam pieces kids use to smack each other in the face. She applied it in ways that transformed that familiar, fun image, using it as a resistance piece.

Despite the instructor’s relative cool, one of the participants exclaimed, “Oh my goodness,” at the end of the second session.

The third demonstration was aquatic zumba.

This was poetry in motion.

The zumba instructor shimmied, pointed, side-stepped, grapevined, twisted, hopped, kicked, punched, jabbed, shoved, swept and swirled non-stop for her 20 minutes. She also incorporated some of the new equipment, including an underwater step platform and some strange, handheld resistance piece resembling a conquistador’s helmet with slits cut along the side.

God knows how much of it the ladies could actually perform. They could hardly keep up following the first two sessions.

At the end of the third session, the six women seemed worn out. I would’ve been, too.

See, there’s an invisible intensity about swimming for fitness. When watching a meet, you can’t really see what’s going on — so much is masked by the translucent curtain of water. But it’s the true full-body workout.

Of course, anyone can see the effort a swimmer expends in their upper body; arms are the primary mode of propulsion in swimming. Thus, you force your body to work against water in a strange, unnatural way.

But what you don’t really think about — or really see — is maintenance of form. It’s diffused through the whitewater churned up by flailing limbs. Aside from your arms, you use your legs to basically stay afloat, and your back and torso should remain stock-straight to keep your weird, non-amphibious body as hydrodynamic as humanly possible.

It’s much tougher than it looks.

While these ladies weren’t slamming down hardcore on lap swimming, I knew their pain.

Ghosts of summers past at Greensboro City Meet

Brian Clarey - July 16, 2014 0
by Jeff Laughlin The poolside silence before the races began parted waves of noise. It lasted a seemingly infinite amount of time while I remembered...
Loading Comments...
%d bloggers like this: