Home Covers IN PRINT: A media war in the Triad: It has ever been... 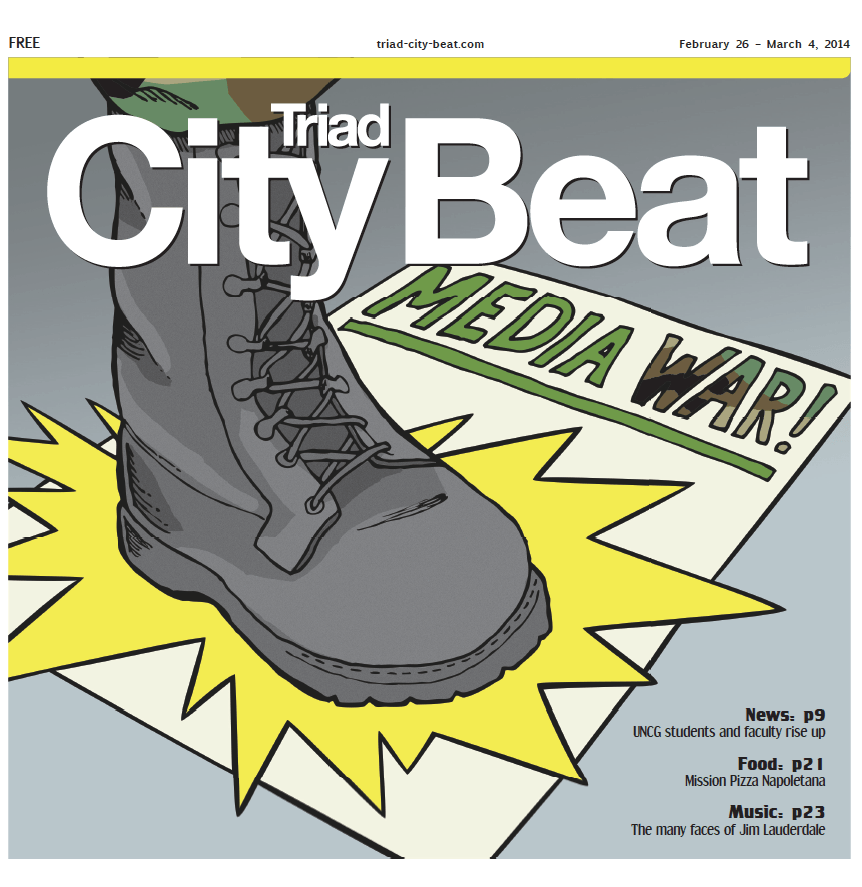 It began in conflict, this Triad media pantheon that we’ve all come to know and love — the TV stations, the radio signals, the websites, the newspapers… all of it evolved from a fight over a weekly newspaper that happened almost 200 years ago.

That newspaper was the Carolina Patriot, begun in the last month of 1825 by men named LG Watson and William Potter. By February 1826, a Raleigh man named T. Early Strange had taken over publisher’s duties, putting the paper out under the masthead Greensborough Patriot.

The history gets murky here for a layman like me, but the July 1953 North Carolina Historical Review posits that Potter and Watson “were forced to sell their establishment to Early Strange of Raleigh.”

Records describe Strange as a manumissionist, which means that he was a steadfast opponent of slavery— a bold stance in North Carolina in 1826. The method with which he obtained control of the Patriot is lost to history, as are the first few issues of the paper put out by Watson and Potter, like they never even happened.

The first few months of Greensborough Patriot issues are gone, as well. The first copy on microfilm at the Greensboro Public Library hit the streets on April 24, 1826.

It’s a nice little package, a four-column broadsheet laid out in the style of the day: one story immediately following another without pictures or artwork, riddled with typos, set in hot lead and literally pressed into the page.

The first item, a bit of international news, concerns the “Duke of Chartes [SIC],” who according to the story was headed from France to Moscow for the coronation of the new Russian emperor, Tsar Nicholas, who would officially take power in September.

In national news, the Senate had recently passed a Constitutional amendment limiting the number of terms a US president could serve to two. The bill would die in the House.

Local news starts on page 2, and begins with an oath: “In ushering to the word anew [SIC] periodical paper, it becomes necessary to avow the principles upon which it will be conducted.”

Besides pledging allegiance to the Declaration of Independence, the US Constitution, “State Sovereignty” and “Rights of Man,” Strange’s newspaper pledged to hold strong for the little guy.

“Detesting tyranny in every shape, whether foreign or domestic,” it reads, “it shall be our aim to make this paper the tyrants [SIC] foe, the people’s friend….

“The aggrandizement of the FEW at the expense and subjugation of the MANY is aristocracy; and wherever this principle shall be found operating upon the body politic, in the remotest degree, it will be our duty to lay it naked before the people.”

And right about this point I’m starting to love the guy.

The game has changed much over the years: the daily newspaper, radio then TV, the myriad forms of digital communication; the presses no longer run on elbow grease and they don’t let little kids deliver newspapers anymore. But for some of us, the important things haven’t changed at all.

Strange sold the Patriot to William Swaim in 1835, and in the ensuing years it merged with other regional sheets like the Southern Telescope and the Lexington & Yadkin Flag. Dozens of newspapers ran through this part of North Carolina back then, before anything else: the Weekly Message, the Carolina Beacon. The Patriot ran in different incarnations until 1946, which is a pretty damn good run.

Five years earlier, on April 17, 1941, the Democrat debuted with a lead story about the 252nd Coast Artillery Regiment of the NC National Guard, a unit that at the time contained a young airman by the name of George Preddy, who would join the Aviation Cadet program of the US Army Air Corps just a week or so after the publication date.

Preddy, a son of Greensboro, would go on to become one of the most decorated pilots of World War II, “the top-scoring P-51 Mustang pilot of all time,” according to his veterantributes.org page.

Meanwhile, at city hall, City Manager CW Smedberg had decreed that no city employees would be allowed to leave the building during work hours without permission from a supervisor.

“Fortunately,” the dispatch reads, “there is a ‘coke’ stand in the street-floor hall.”

The newspaper industry took a hit after the war, when television so rudely intruded on its space wrapped in the cloak of the public airwaves. But people who understand the importance of staying informed can’t go for too long without the feel of newsprint in their hands. By the time the summer of love had come and gone, the city had both a morning and afternoon newspaper, the Record and the Daily News, and a slew of counterculture ’zines that bring to mind the very first couple of issues of Rolling Stone: offbeat jumbles of words and art, typewriter fonts and paste lines.

The Greensboro library’s archive of the Greensboro Sun begins with the March 22, 1972 issue and a proclamation by the editorial board naming itself and the Ministry for Social Change as an ad hoc Police Review Board. A list of city phone numbers in the corner of one page encouraged readers to make their voices heard.

A journalist by the name of George L. Weiss contributed a story about government surveillance in Vietnam and a nefarious operation called “Igloo White.” Back then this was classified, but now we can find an entry for Igloo White on Wikipedia.

Another article, without a byline, updated law enforcement tactics on Tate Street, which was at that time an epicenter of the city’s drug culture, and an alleged “narc” down there by the name of Joseph Dike.

“Alias Buddy,” the dispatch reads. “Some buddy he turned out to be.”

If there is such a thing as a Triad Media War, then I am an active and willing participant. I knew what I was getting into, way back when. And I’ve been on maneuvers ever since.

I came on the scene here back in 2000 with an armful of clips and a naïveté that I didn’t recognize then but that embarrasses me now. If this is a war, I was the hayseed who enlisted in the hopes of getting stationed in Hawaii but ended up on the front.

A seasoned Triad scribe named Ogi Overman took pity on me and gave me my first paying journalism gig in the Triad, an article for his ESP magazine about a fall music fest in 2000.

Overman, who grew up in Burlington, got into the newspaper business in the late 1960s, right around the time he claims to have invented the phenomena that would become known as “streaking,” as managing editor for the East Carolina University Fountainhead.

“That’s a hell of a name for a college newspaper,” Overman says. “I sure do hope they changed it.”

They did. It’s now known as the East Carolinian.

“I kinda wish I got into it right out of college,” he adds, “but then again I would have missed the music part, even though it was a lost cause. I found out I was much better at writing about music than playing it.”

Overman would become one of the Triad’s most renowned cultural writers. But first he caught on with a weekly called the Sports Page.

Something else happened in 1984. The two daily newspapers serving Greensboro merged into one company, printing both morning and evening papers. The evening paper was discontinued in 1986.

“That’s where the hole in the market came from,” Overman says. “That’s when all the freebie papers started popping up all over the country.”

One of them was the Spectator, founded by a man named Bernie Reeves, who might best be described as the Chuck Barris of North Carolina journalism. The Spectator put out issues in both the Triad and the Triangle. The paper’s legendary editor Hal Crowther, who served from 1986 to 1989, wrote for both.

The Triangle’s version of the Spectator was bought by the Independent Weekly, its content folded into the flow, and the Greensboro run was acquired by the News & Record’s parent company Landmark Communications and eventually morphed into the entity known as Triad Style.

But I’m getting ahead of myself.

In 1988, the Sports Page had folded. Overman was working in the mailroom of the N&R, “just to be around it,” he says.

“I was thinking about sports and music,” he remembers. “Maybe if we combined my two passions and made a little paper out of that, wouldn’t that be sweet?”

He teamed up with bar owner Bill Kennedy, got funding from a nightclub promoter named Bill Griffin and set to work.

“We started with nothing. I mean nothing,” Overman says. “Kennedy hocked his golf clubs to pay for the printing.”

ESP stood for “entertainment, sports, previews,” and it eventually performed well enough to attract the attention of the High Point Enterprise, which bought it in 1992. Ogi had peeled off by then, but he returned to ESP in 1995 to edit the paper through its twilight.

“We had whored it out by then,” he says. “We lowered the bar. Until I came back it was totally whored out with titty bars and massage parlors…. That went as far as it could go when they shut down the massage parlors.”

That’s roughly the time I appeared on the scene with a handful of clips and the desire to prove my worth. I worked for Overman for a time, then Triad Style. Eventually I would write for every paper in town. Overman began a paper of his own, the short-lived Greater Greensboro Observer. And then, for a time, he came to work for me.

Which brings us to events of Very Recent History….

In 2004, I got a job editing a new weekly newspaper, which debuted Jan. 4, 2005. In the ensuing nine years, the faux-alts owned by the dailies — the Winston-Salem Journal’s Relish and Go Triad, which succeeded Triad Style — came off the free street racks and into Thursday’s daily newspapers as inserts. In its 20th year, the Rhinoceros Times breathed its last… only to be brought back to life by a downtown developer. And, on Election Day 2013, I got fired.

Not content with being a casualty in the Triad Media Wars, I mustered everything I could for one last charge.

Today, a new weekly newspaper debuts in the Piedmont Triad. This one: Triad City Beat, lovingly constructed with old friends and newfound talent, the latest salvo in a firefight that began almost 200 years ago, when somehow Early Strange grifted his way into controlling ownership of the Greensborough Patriot.

Like his newspaper, we were born from quiet conflict. And his words suit our purpose well, lo these many years later: “the tyrant’s foe, the people’s friend.”

Wars have been fought for less.