Home culture IndiaFest sews together cultural threads of the subcontinent 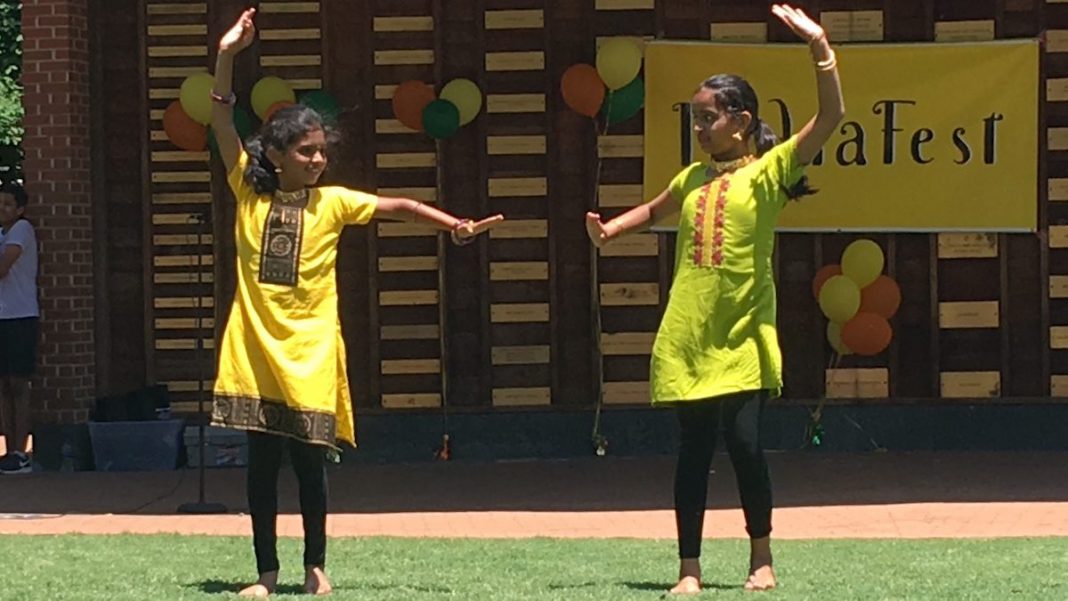 In some ways, Indian culture is like a saree: While the length of the fabric stays consistent, each region of India wears it in a slightly different way. The many cultures of India show their differences in a nuanced manner, and there’s a challenge in relaying this information to those unfamiliar with the subcontinent.

The India Association of the Triad tackled these challenges at IndiaFest 2019. Their mission involves bringing awareness of Indian culture to local, non-Indian residences. Sarika Mohan, the association’s 2019 executive committee president, estimated that about 2,000 people came to IndiaFest throughout the day. The festival showcased 28 performances of choreographed dance numbers and 17 booths with food, games, clothing and jewelry. Organizers say that this was the largest Indian cultural festival held at Center City Park.

Near the center of the park stood one of many canopies sheltering tables filled with jewelry. Golden necklaces rested on small neck busts and bracelets, illuminated with pearls, lined one of the three tables. A spinning display of earrings showed off several pairs of jhumka, an ancient design that resembles two jewel-encrusted bells which dangle and chime from the wearer’s ear.

“Each part of India has a certain style [of jhumka],” said Farida Bootwala, who’s part owner of Click-n-Shop, an online jewelry store that had set up a booth for the event. “You can tell where [a jhumka] is from by the stones that decorate it.”

“Across India, everyone has a similar view on how a child should be raised — on how a child should act towards adults,” said Mohan. “If you look at cultural values, everyone has their own way of expressing them. The underlying message of these values remain the same but the execution of expressing these values might differ a little bit from region to region.”

Vishvasai Silks sells a variety of sarees through her online retail shop. They put out waves of brightly colored fabric on the two tables at their booth. Tamil Nada, the woman working there, said that sarees are worn at marriages, family reunions and other celebrations.

Poster boards were tied to street lamps and tree trunks underneath the shade at an entrance to the park, each showing the capital city, the language and the population of a different Indian state, the percentage of the country’s total population living in that state as well as some photographs of regional food or fashion. For example, the state of Tripura’s capital is Agartala, both Bengali and Kokborok are spoken there, more than 3.6 million people live there and yet that only makes up about 0.3 percent of India’s total population.

While the information given only skims the surface of the many cultures within India, the poster boards helped introduce India as a massive, intricate and multilingual civilization to the non-Indian residents of Greensboro.

The India Association of the Triad must also address the concerns of the local Indian-American community. One of these is, of course, the racial tensions that any ethnic minority faces in the United States. While the defining characteristics of a race can change throughout the world, America largely defines ethnicity by one’s skin tone.

“You can’t tell if someone is Indian by the color of their skin,” said Mohan. “We have to communicate that we are Indian.”

Through this dialogue, Indian-Americans make themselves culturally visible to their non-Indian neighbors. Mohan did assure that things have gotten much better since she arrived here 27 years ago. However, like anything to do with race relations, things could always improve.

Steve Rao, the longest serving Indian-American politician in North Carolina, gave a short speech at the festival. He’s a Morrisville councilman who served as mayor pro tem from 2015-2017. One of his foremost concerns as a public servant is the relationship between the United States and India as well as streamlining the immigration process. Military defense and economic prosperity are two things that could improve if the United States and India came closer together as allies, in Rao’s view.

“We’re building bridges,” he said to the crowd. “[From] the world’s oldest democracy [to] the world’s largest.”

Learn more about IndiaFest and the India Association of the Triad online here.