An inventory of historic industrial properties in High Point highlights a number of buildings that are ripe for adaptive reuse, and some others that could potentially qualify for historic tax credits.

Laura AW Phillips, an architectural historian, was conducting a survey of High Point’s historical industrial properties in the spring when she noticed renovations underway at the old Carolina Casket Co. building, a two-and-a-half-story, 1929-vintage brick warehouse on Millis Street in the city’s southwest quadrant.

The property was purchased in late 2012 for $135,000 through a joint acquisition by Terry Seitz Inc., a Florida-based importer of South African wines, and Boliya USA, a Missouri-based furniture company that manufactures in China. Thanks to the new owners’ investment, the property is now valued at $206,000.

One of the owners happened to be in High Point at the time Phillips was visiting the property. She congratulated him on the improvements to the building.

“The only thing I don’t understand is why you aren’t pursuing tax credits,” Phillips told him.

The owner responded that he had been under the impression that the building wouldn’t qualify.

She put him in touch with a woman who could help him pursue tax credits, and Phillips started preparing an application for the National Register of Historic Places.

Inclusion on the register is a powerful redevelopment tool, making properties eligible for a 20 percent federal tax credit, although the state of North Carolina is no longer offering a matching credit.

The architectural survey completed by Phillips in August reviewed about 300 industrial properties in High Point that were developed prior to 1970, about half of which had been demolished or destroyed by fire. She narrowed the list to 69 for historical and photographic documentation in the survey, and then made an additional cut to 16 candidates for a “study list” for potential inclusion on the National Register of Historic Places. Phillips received $15,000 through funding from the city of High Point with a matching grant from the Federal Historic Preservation Fund to complete the survey.

“The city of High Point undertook the present survey out of concern for the economic impact of numerous industrial complexes that stand idle and with the knowledge that many of the buildings could be rehabilitated for new uses,” Phillips told a small group of elected officials, preservationists and revitalization advocates during a presentation at Highland United Methodist Church on Monday. 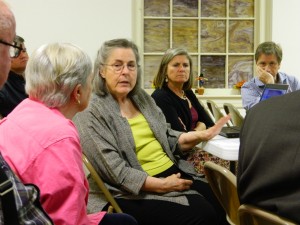 Describing the city’s history, she said, “A fortuitous combination of an expanding rail system, access to raw material, access to local capital and strong leadership contributed to High Point’s remarkable development as an industrial giant in the late 19th Century and continuing through most of the 20th.”

The number of manufacturing plants exploded from 1900 to 1907, she said, nearly doubling from 33 to 62. By that time, a style of industrial architecture originating in Rhode Island had become standardized in North Carolina, and can still be found throughout the state. The mills and factories used brick exteriors to minimize the risk of fire, heavy timber posts and beams with “the ability to support the weight of machinery,” a spacious layout “that would enable production efficiency” and large, operable windows for natural light and ventilation.

With the advent of air-conditioning in the mid-20th Century, Phillips said, many of the windows were bricked up. Over time steel and concrete began to augment or replace timber for support posts, affording more room to maneuver within the plants.

“During the second half of the 20th Century, more and more buildings erected for industrial purposes were sprawling, one-story structures with flat roofs and largely windowless walls of brick veneer over steel structural systems,” she wrote. Many of the newer buildings were constructed on the southern and eastern outskirts of the city after interstate highways diminished the role of rail in freight transport.

The list of manufacturers that have closed up shop in High Point under pressure from low-cost competition from abroad has been the subject of a seemingly interminable string of newspaper headlines over the past two decades.

Only a few remain in business. Slane Hosiery Mills, which turns out socks for Nike, and Marsh Furniture, which produces kitchen cabinetry, both employ local production workers. But the number of jobs provided by the two companies — 567 and 412, respectively, according to a 2013 list compiled by High Point Economic Development Corp. — are only a fraction of the distribution and customer services jobs offered by the city’s two largest employers, Ralph Lauren and Bank of America.

Slane Hosiery Mills and Marsh Furniture — both located on South Centennial Street — are included on the study list for potential inclusion in the National Register of Historic Places.

Three others are on the study list as candidates: Pickett Cotton Mills, which was recently acquired by the Belgian furniture maker BuzziSpace; the Southern Furniture Exposition Building; and Myrtle Desk Co.

The Harriss & Covington Hosiery Mill on Oak Street is one.

“It has this 1920s classical detail,” she said. “I thought that was really cool.”

The Melrose Hosiery Mill on West English Road near the split with West Kivett Drive is another.

“Its one-to-two story brick buildings exemplify High Point’s industrial structures during roughly the second quarter of the 20th Century,” Phillips said during her presentation. “The complex showcases some of the city’s most architecturally unusual industrial buildings in its row of two-story structures along West English Road that have stylish commercial façades, although they were used in large part by various operations of the hosiery mill.”

After the presentation, she elaborated.

“I was really interested in that,” Phillips said. “It was full of small parts. It was being used for other stuff. There were washing machines lined up inside. It looked like there was a little business selling used appliances.”

Who owns the ghetto in High Point?

Becky Smothers looks back at three decades of public service

Jordan Green - December 17, 2014 0
by Jordan Green The city of High Point has experienced dramatic growth in residents, office parks and shopping centers on the north side over the...
Loading Comments...
%d bloggers like this: