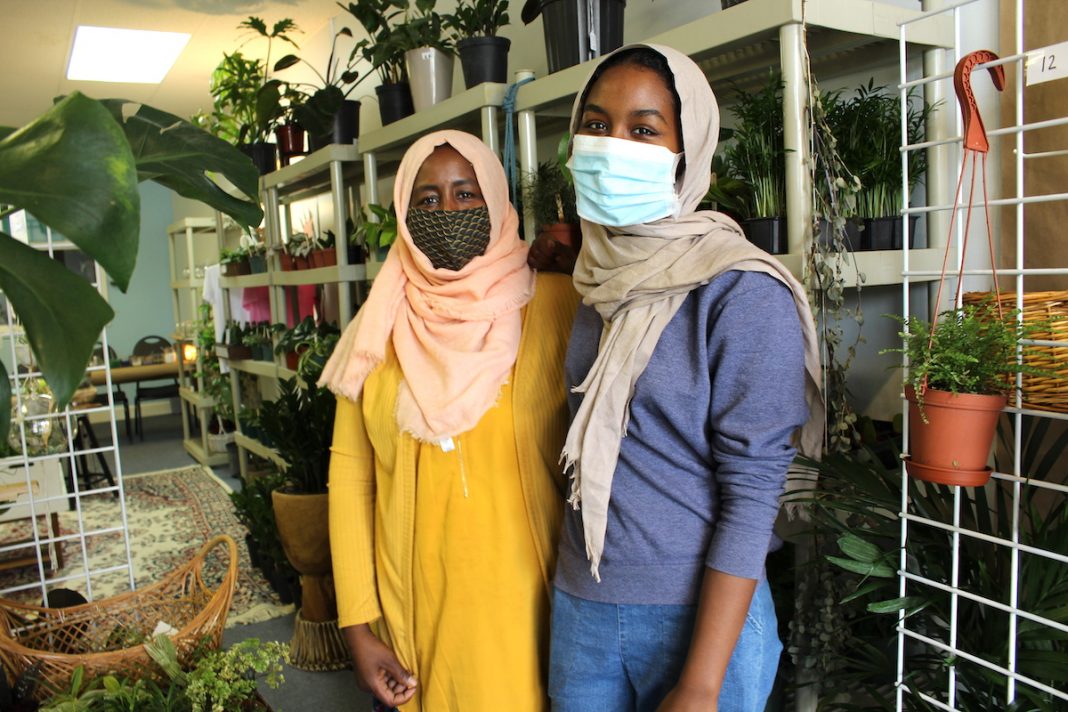 Latifa Aboeid takes after her mother.

The 21-year-old spends much of her time tucked into Green Door Garden, a little plant shop in the Westover Gallery shopping center in Greensboro, carefully tending to the myriad of pots that overflow with viny tendrils and new, tiny shoots. Her love of greenery comes directly from her mother, Mona Abdelgadir, with whom Aboeid runs the shop.

“We always grew up gardening,” Aboeid says. “It was like a whole family deal, on the weekends and after school. We have a huge garden, and then she got into houseplants and kind of dragged us all with her — it’s a houseplant obsession.”

Abdelgadir immigrated to Greensboro from Sudan 25 years ago with her husband after he won a visa lottery. Since then, she has had nine kids, including Aboeid.

“That was my dream,” Abdelgadir says about opening a plant shop. “I really love plants. I really wanted to do it for a long time, and then my dream came true and I did it.”

Like her daughter, Abdelgadir says she grew up around greenery in Sudan because her father was a farmer. She recalls how her family used to pick hibiscus flowers from trees in their garden and dry them for tea. The farm-to-table tradition is one she’s passed onto her children as well, who also help her run a food stall — aptly named the Mom and Daughter Shop — at the Corner Farmer’s Market. It’s been open since 2018.

Green Door Garden started online in October 2019 and opened its brick-and-mortar location in January. The store closed temporarily in March because of the pandemic and has been open again since June. Easy-care plants like pothos, snake plants and spider plants are their specialty.

Amidst the pandemic, the duo say that online sales have increased.

“I think people have time,” Abdelgadir says. “They stay home; they don’t have anything to do and they looked for their favorite thing they want to do.”

“Also taking care of something, having some autonomy in a weird time when a lot of that was taken away from you,” Aboeid says.

Abdelgadir says her favorite part about plant care is waking up in the morning and being surrounded by a sea of green. Aboeid says she loves watching the plants grow and seeing new leaves sprout.

“I’m always surprised when I’m able to keep something alive,” she says.

Both Green Door Garden and the Mom and Daughter Shop combine Abdelgadir’s passion for growing, cultivating and sharing plants and food. Operating both has deepened her relationships with her daughters, who help out in each endeavor.

“It is really nice,” Abdelgadir says about working with her daughters.

Abdelgadir uses Sudanese family recipes passed down to her from her mother and grandmother including ones for hummus, baba ghanouj, chickpea salad and chai tea to create goods for the farmer’s market. She also makes snacks that she enjoys like chia seed pudding, guacamole and pico de gallo. Aboeid makes baklava. They also make a hibiscus tea, although not one made from dried flowers from their garden like back in Sudan, though they do use mint from their Greensboro garden. In order to ensure freshness, Abdelgadir makes everything the day before the Saturday market.

Both the mother and daughter, who wear similarly wrapped headscarves died in pastel tints, say running the businesses has helped them feel more tapped into the community.

Aboeid, who was born and raised in Greensboro, says meeting the customers who visit Green Door Garden is her favorite part about running the business.

“I feel like I was disconnected from the Greensboro community before,” Aboeid says. “But the farmer’s market, there’s a lot of people there and everyone’s so friendly. And then the store, there’s a lot of overlap between people I meet at the farmer’s market and people I meet here. There’s also new people. Probably the most rewarding part is meeting people and becoming more integrated into the community.”

Abdelgadir says she felt similarly when she came to the United States in 1995. When she moved to Greensboro from Sudan, it was her first time leaving her home country and she didn’t know anyone here. She says she and her husband were one of the few Sudanese families in the city. Now, Abdelgadir says she feels at home in Greensboro and has carved out her own community here. She cooks meals every night using produce from the family garden, and her daughter has taken to sharing their love of cooking with the next generation. Aboeid says she makes muffins and cookies with her niece, Rayan. Eventually, the two hope to open a second Green Door Garden in the city.

“I’m so proud of her because she is a really hard worker,” Abdelgadir says about Aboeid. “She takes care of the whole store by herself; I just help her sometimes.”

Aboeid says watching Abdelgadir chase her dreams, manage the two businesses and work her full-time job at a daycare has deepened her relationship with her mother.

“I realized how hard she works and how much effort she puts in raising a family, working full time, running the store and running the farmer’s market,” she says. “It makes you appreciate everything a little more.”

Green Door Garden is located at 1420 Westover Terrace Suite D in Greensboro and is open every day. Learn more at greendoorgarden.com. The Mom and Daughter Shop operates out of the Corner Farmer’s Market every Saturday morning in Greensboro.