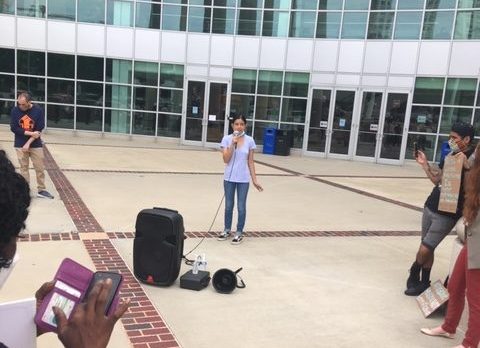 Vanessa Reyes of Winston-Salem has come a long way in her 19 years, and a big part of her journey from Mexico has been the road to speaking out, trying to explain to the public the reasons her fellow Latinx residents face high eviction rates, and why she feels that many of their evictions are unwarranted.

She detailed some of those reasons, on July 1, before speaking at an anti-eviction rally outside the Forsyth County Government Center. In small-claims court on the first floor of the building, landlords were pressing more than 50 cases against potential evictees – Black, white and Latinx.

Reyes said eviction proceedings are especially hard for Latinx people. Factors, she said, include deplorable housing conditions, a lack of legal representation, the language barrier and the high rate of COVID-19 infections among Latinx folks, causing them to lose work at essential jobs and forcing them to pack into even more crowded quarters. Latinx residents account for more than 65 percent of positive COVID tests in Forsyth County, the most of any demographic group. With many Latinx people lacking documented status, she said, they lack health care.

“All the odds are just stacked,” Reyes said.

COVID-19 has become the perfect storm for Latinx people facing eviction. It could aggravate the high eviction rates Latinx renters have already endured.

Winston-Salem has a high overall eviction rate, more than 3,000 annually, or almost nine a day, according to a 2016 Princeton study that placed the city as the 16th highest in the country in the number of evictions. CSEM continues to explore the issue in all its complexity, looking at ways that tenants and landlords might reach agreements before eviction, such as mediation, and by interviewing Latinx renters facing eviction and Latinx people like Reyes.

She has lived here since she was 6 years old, a graduate of East Forsyth High School and student at Guilford Technical Community College. She helps fellow Latinx immigrants with eviction issues. She works for Mijente, a Latinx grassroots organization, and is a member of the Latinx advocacy group Siembra NC.

Many local Latinx workers lost jobs due to COVID infections and in the overall economic downturn of the pandemic, she said, and that has left them vulnerable to the lifting of Gov. Roy Cooper’s moratorium on evictions, just as it has left Blacks and whites of low resources vulnerable.

The evictions laws, Reyes noted, are a labyrinth for anyone, much less those who do not speak English. “Imagine doing that without papers,” she said. When Latinx renters facing eviction make their first appearance, in small-claims court, no translators are provided. They can ask for a continuance and request a translator for a hearing the next week, but many potential evictees do not initially realize they have that option.

Latinx North Carolinians have limited access to lawyers. Legal Aid of North Carolina cannot represent undocumented immigrants because it receives federal funding that does not allow representing the undocumented in eviction cases. Wake Forest University’s Community Law Clinic provides counsel to potential evictees of all backgrounds, but its staff of director law school professor Steve Virgil and law-school students is small. A city of Winston-Salem program, ARM, offers mediation services to potential evictees of varied backgrounds, and that program, the WFU clinic and Legal Aid are ramping up mediation services. A local group, Housing Justice Now, advises Hispanics and others facing evictions on their rights to appeal and other tactics, and refers them to lawyers, but does not include formal legal representation.

Complicating the scenario, Reyes said, are cultural differences, she said, noting that she was speaking strictly of her native country.

“As Mexicans, we don’t like to borrow money,” she said.

There are other complications. Often, Latinx families live in deplorable housing, and, as undocumented immigrants, they might be afraid to speak out, she said. She said they might also feel they should not have to pay rent for apartments until landlords respond to their repeated requests for repairs.

Railey is the writer-in-residence for WSSU’s Center for the Study of Economic Mobility. He can be reached at [email protected]. For more information about CSEM, go to www.wssu.edu/csem.