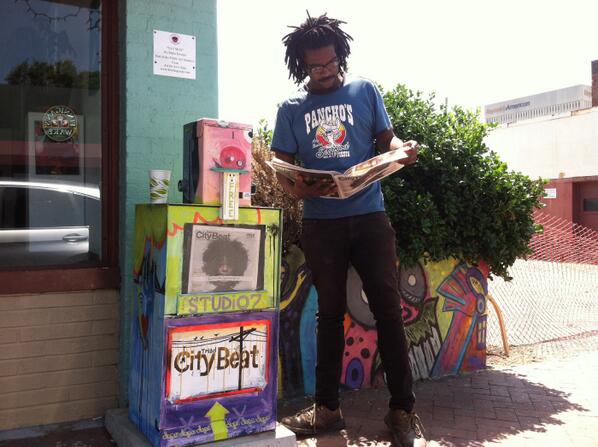 Nothing can replace straight-up reporting, of course, but distributing newspapers is a particularly great way to enhance one’s sense of place. Possibly the most dramatic tableau on my downtown Winston-Salem route is the Piedmont Club, the private club on the 19th floor of the BB&T building with a view of Pilot Mountain. If there was a local version of the movie Bonfire of Vanities, I imagine a symbolic shot from the elevator, which affords a southward view, including Corpening Plaza and the expressway below, as it zooms straight to the top.

I love this stop, partly because we go through so many dang papers here. The hub for WSTA funnels in working people from all parts of Winston-Salem, and — through the PART buses — from around the region. People trying to get to work and school, couples and single mothers with small children, and sometimes down-on-their luck people just looking for someplace to be — they all come through here.

It’s a lot of fun to provision the boxes decorated by local artists. Of course, the double box in front of Delurk Gallery, painted by Patrick Harris, that bears a self-portrait of the artist in a bear suit inaugurated our Winston-Salem presence. A couple weeks ago we deployed a really cool locker with a night-and-day skyline motif painted by our art director, Jorge Maturino, at the corner of the parking lot across from BioTech Place. It juxtaposes nicely with the actual skyline of Winston-Salem. Another custom box for downtown Winston-Salem is in the works. And last Wednesday, I had the pleasure of meeting Dezo at the beautiful box he painted for us outside of Studio 7 on Trade Street. For photos, check out my Twitter feed @jordangreentcb.

I love the barbershops: Chop Shop Barber & Beauty on North Trade Street, the Oval Office on West Fourth Street, Hair Bomb Salon on Burke Street, and Elegant Choice and Faye’s Full Service Salon, both on Northwest Boulevard. They’re each places where people who represent distinct cultural segments of the community come together.

A coffeehouse sharing space with Haute Chocolate and Revolution Gliding Tours, Twin City Hive is a pioneering placemaker in the burgeoning south end of downtown below Business 40, an area that already boasts the venerable Brookstown Inn, a handful of fine restaurants including Meridian and Willow’s Bistro and the Winston-Salem Children’s Museum. Hopefully, the vibrancy that is being nourished there will gradually seep down Marshall Street and bring some patrons through the doors at the Gateway Gallery near the nascent Gateway Circle.

The Subway up the street from the Forsyth County Hall of Justice and Krankies Coffee are open when I start my route at 8 a.m., provisioning the needs of lawyers, clerks, defendants and other parties. I try to hit Foothills and Mary’s Gourmet Diner before their lunch rushes. I tie off a bundle of papers with a salvaged zip ties and chuck the package into the doorway of the Garage, which won’t open until much later. It’s a reminder of sequenced flow of humanity through the various eating and drinking establishments throughout the day.

‘I do’: W-S wedding venues speak out in support of LGBTQ+ community

‘Can until can’t’: How local businesses survive Valentine’s Day