Winston-Salem/Forsyth County School Board members continue to weigh their options on whether to provide funds to build a new athletic stadium for Reynolds High School.

In four years, RJ Reynolds High School will celebrate its 100th birthday. And as the oldest and one of the largest high schools in the district, parents and alumni of the school say it’s long past time for Reynolds to have its own athletic stadium.

For the past seven years, RJ Reynolds High School Homefield Advantage, a private organization made up of past Reynolds alums and parents, has been working to raise funds to build a brand-new stadium onsite at the high school.

“Because RJ Reynolds doesn’t have a homefield… those teams have to practice and play off campus,” said Laura Burrows, a volunteer for Homefield Advantage and a parent of two Reynolds High School alums. “This creates an access issue. Fifty percent of our students qualify for free or reduced lunch. What that says is that nearly half of our student population faces financial hardship, transportation hardship. [Deaton-Thompson] is miles away from the school.”

Google maps indicates that, depending on the route taken, the shared stadium is about five miles away from the Reynolds campus and takes approximately 15 minutes to travel by car. In contrast, the stadium is less than two miles from Parkland High School.

The distance, Burrows argued, is a barrier for many students who want to play sports but can’t access the facility.

“It’s not just the students,” Burrows said. “It’s the families too. They can’t come to watch that child play sports, and kids can’t try out for sports. We also have trainers trying to get to multiple locations to serve the Reynolds teams.”

In addition to football, Burrows said that students who play field hockey, soccer and lacrosse are also disadvantaged by having to use an off-site stadium.

According to plans provided by Homefield Advantage, a new stadium for Reynolds High School would be built where a bus parking lot and Wiley Middle School’s gymnasium are currently located.

To achieve their goal, parents and alumni formed Homefield Advantage in 2012 as a way to raise money for a new on-site facility. So far, the nonprofit has raised $1.1 million for the project. About $430,000 of the funds raised was used to create plans for the new stadium, as well as to build a practice field on the high school’s campus. With about $5 million needed to construct the new stadium, Homefield Advantage is still short $4.5 million.

Now the organization is asking the school board for public funds to help make its 7-year dream a reality. They say they want about $3 million from the school board for the project. The amount is comparable to what the board has allocated to other high schools in recent years for renovation of their sports facilities. According to Assistant Superintendent Darrell Walker, the school district gave both Mt. Tabor and Glenn High School about $3 million to renovate their stadiums in the 2016 bond referendum.

“No high school has ever been asked to raise money for their own facility,” Burrows said. “But we committed to taking it on. We made a commitment to raise funding to make this facility a reality because it’s important.”

Malishai Woodbury, the chair of the school board, said she understands the need for a stadium at Reynolds.

“All high schools should have a stadium to educate the whole child,” she said. “It keeps children engaged. Most kids won’t get into trouble leading up to Friday games.”

As for whether or not the school board will help Homefield Advantage fulfill its goal, Woodbury said board members will listen closely to advice from staff. But Walker noted that the decision ultimately rests with the board.

Based on a facility assessment by the county prior to the 2016 bond referendum, the Wiley Middle School gymnasium was found to have multiple issues including access limitations for students with disabilities. For that reason, Walker said there is funding from the 2016 bond package to demolish and rebuild the gymnasium closer to the middle school, which would free up space for the stadium. But first they would need to relocate the HVAC and mechanical system that currently powers the entire school and is housed in the gymnasium before demolishing the building.

Walker said that a schematic for the new gym was presented to the school board last Tuesday and that the county will likely start the bidding process for the HVAC project in about four to six months. In reality, Walker said that a newly constructed gymnasium for Wiley probably wouldn’t be completed until 2022, just a year before Reynolds’ centennial.

Another obstacle to advocates for a new Reynolds stadium is a neighborhood group, Save Hanes Park, which opposes the construction of the stadium in its currently planned location next to Wiley Middle School and adjacent to Hanes Park.

Anna Goodman, a spokesperson for the collective, said she believes that the new stadium is unnecessarily expensive and would disrupt the natural setting of the park.

“It’s more expensive than the school system would ever pay for,” Goodman said.

Goodman argues that the facility would cost more than a regular stadium because of its location next to Hanes Park and the environmental impact it would have on its surroundings. She also blames the school board for letting Homefield Advantage get as far as they have.

“It shouldn’t have even advanced this far,” Goodman said. “No one wants to tell them it’s a bad idea. If it was a good idea, the school system would have done it. It hasn’t been done because it’s environmentally hard.”

But school officials indicate a new stadium for Reynolds may be inevitable. Based on findings from the 2016 assessment, the shared Deaton-Thompson stadium will need to be renovated or rebuilt after the 2024 bond. If Reynolds builds its own stadium by then, the newly renovated stadium will be for Parkland High School’s sole use. If not, the two schools will continue to share it.

Dana Caudill Jones, one of four school board members who represents District 2, said in a recent Facebook Live video that while the board hears Homefield Advantage’s ask for more money, she noted that the district has other needs, too.

“We also have some other needs before I think we can do a stadium,” Jones says in the video. “Part of that is our teacher supplement needs to go up. We need to try to give an increase of at least $15 an hour for our educational support team and so we have a lot of needs around the district.”

Woodbury said that prioritizing projects is difficult and urged parents to be patient.

“As a board member, I am here to make sure that we provide a great education for all children in our district,” she said. “When we start to talk about what some schools don’t deserve, we start to unfortunately be led by our adult emotions and egos and are not thinking from the needs of a child…. It’s about educating the whole child. One way or another, we have to find a way to have sports. It’s for the children.” 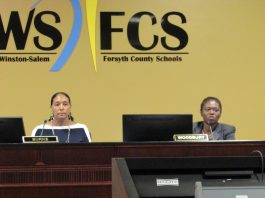 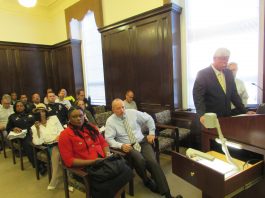 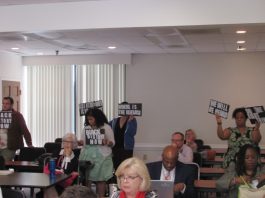 ABOUT US
Triad City Beat exists to chronicle the North Carolina Triad cities of Winston-Salem, High Point, and Greensboro as low-cost incubators of innovation, sustainability and creativity. We publish smart reporting and writing that recognizes the intelligence of our readers. Triad City Beat is wholly owned by Beat Media Inc.
Contact us: [email protected]
FOLLOW US
© Beat Media, Inc. All Rights Reserved