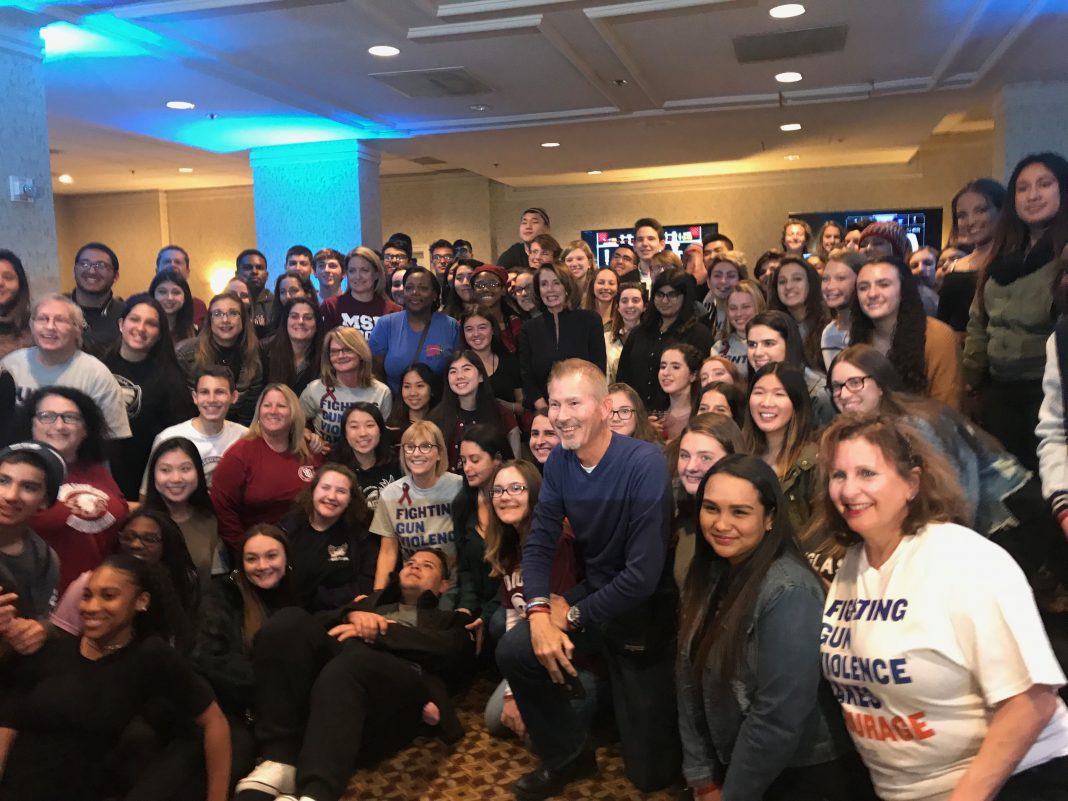 The world watched them rally on Pennsylvania Avenue but — until recently — few had witnessed the view from over their shoulders as they crafted protest signs or hugged before taking the stage.

These intimate scenes comprise We Are the Change, a documentary rooted in Marjory Stoneman Douglas High School students’ field trip from their homes in in Parkland, Florida to the US capitol for conversations with legislators and the March for Our Lives demonstration. RiverRun International Film Festival, which hosts a medley of events year-round, brought the film to Winston-Salem at both the Southeastern Center for Contemporary Art and at Salem Academy on Oct. 18 where students heard from survivors traveling with the film eight months after a 19-year-old former classmate rocked their affluent suburban community when he massacred 17 people with an AR-15 semi-automatic rifle.

“I thought: There’s no way I’m doing this. I can barely get out of bed. How am I going to travel eight hours to our capitol and speak on something I barely know?”

But she boarded the bus alongside classmates the next day.

“I was a teacher and now I’m chief organizer of trips to government entities,” Debby Miller, a language arts teacher at Stoneman Douglas, says. “What was interesting was every parent I contacted [about the trip] said, ‘Oh, hell no,’ and every kid in the background yelled, ‘I’m going,’ and at 4 o’clock Sunday morning there were 50 kids in the parking lot.”

In an interview following Thursday’s screening, filmmaker Gina Onori says the hardest part of producing the film was being present as students related their experiences to legislators.

“I was crying as I was filming, so I was like, Do I stop filming? But to make change, people need to hear this. People need to realize the pain of what they’re going through.”

On March 23, the day before the March for Our Lives demonstration, the Parkland students met with some of their Congressional representatives and better-known politicos like former Vice President Joe Biden, US Rep. Nancy Pelosi and former US Rep. Gabby Giffords, who became a gun-control advocate after surviving an assassination attempt in 2011. Republican Florida Senator Marco Rubio snubbed the group.

“What scared me the most was saying one thing that was wrong and that being nitpicked and discrediting what everyone else was saying,” senior Florence Yared says of feeling thrust into the public eye. “I did my research the best I could, and I had to try because if I didn’t, who would?”

A common theme in the students’ testimony is how the shooting illuminated their stake in politics and spurred an enthusiasm for civic engagement.

“I wanted equal rights and the basics, but I didn’t want to get into arguments with anybody and thought it wasn’t that important,” Yared says. “Now I’m keeping up with the news and talking to people about political issues.”

“In only a few short days we worked up the nerve to actually approach the government to make a change so that this never had to happen again,” senior Ashley Santoro says. “I think as little might have been done, we still did a lot and it means a lot and that makes me still want to work.”

“Tell them to vote for you and not the gun manufacturers,” he says following the screening.

“Seeing [the documentary] again reminded me of everything that happened on the trip because then it was a blur for me to be honest,” Yared says. “We were hit with so much. To be reminded more than a million people came to a march… and then there were like 500 sister marches around the US and more around the world, is incredible.”

Onori’s film shows how media bombarded the students and teachers with lights, mics and cameras throughout the D.C. visit.

“A lot of times I put my camera away and just talked to them,” she says. “I was spending most of the time with them, so we became more friends and it made things more comfortable.”

Of course, there is nothing comfortable about speaking publicly on your trauma.

We Are the Change underlines the humanity of Stoneman Douglas students who found themselves turned into symbols of the anti-gun violence movement, a downside of which is immense pressure to visibly participate in national discourse, to continue inspiring audiences, all while being cast at once as America’s saviors-to-be and as too naïve to grasp the complexity of the debate. What they undeniably understand, though, is their own trauma and how storytelling can shift priorities, both personal and public.

“I believe I’m a different person before the 14th and after,” Eaton said. “Before [the shooting], I would see these things on TV and think that would never happen in Parkland…. I wanted to stay out of politics because I didn’t want to say the wrong thing. After, I have moments I don’t want to get out of bed… but days like today I’m here talking to you and I feel empowered because we’re making change and you’re helping us. I don’t want you guys to have to be two different people, though; I want you to be the same person throughout your whole life, so when you can vote like your lives depend on it because they really do.”

Slideshow: March for Our Lives, Greensboro

On a day for students, adults look to confront Sen. Richard Burr

March for Our Lives tour hosts rally in Greensboro, only stop in North Carolina

The Return of RiverRun: A guide to the 2021 Festival

EDITORIAL: At RiverRun, a look at the state of NC filmmaking

IN THE WEEDS: Friday night in Event Town

Dispatches from this year’s RiverRun gala

Jordan Green - April 13, 2016 0
by Joanna Rutter Eddie Schmit was tucked away behind a cocktail table, easily lost in the sea of several hundred people milling in low light...
%d bloggers like this: