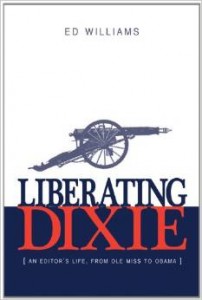 All great writers, even those who steer into the mainstream as their careers progress, must pass through a crucible — a test of fire that often involves taking an unpopular stance in a hostile environment.

For Ed Williams, who retired in 2008 as editor of the editorial pages of the Charlotte Observer, the test was Mississippi during the civil rights revolution of the 1960s, where he entered the University of Mississippi in the fall of 1961, a year before white students rioted to prevent James Meredith, the university’s first black student, from attending classes. Williams later went to work for the Delta Democrat-Times as an understudy to Hodding Carter Jr., a courageous editor who stood up to the reign of racial terror imposed by Mississippi’s white governing class.

Williams’ apprenticeship under Carter provides the foundation for Liberating Dixie: An Editor’s Life from Ole Miss to Obama, a collection of the writer’s editorials and columns.

As a mark of Carter’s courage, he was denounced in a resolution passed with overwhelming support by the Mississippi House of Representatives in 1955 after he warned in an article for Look magazine that the white Citizens Councils, organizations headed by leading citizens intent on preserving segregation, could become “instruments of interracial violence” if thugs took them over. Rep. Eck Windham called the article’s contents “a willful lie by a nigger-loving editor made about the people of Mississippi.”

Responding boldly and with piercing wit, Carter rejected the legislators’ characterization. “If this charge were true it would make me well qualified to serve with that body,” he wrote. “It is not true. So to even things up I herewith resolve by a vote of 1 to 0 that there are 89 liars in the State Legislature, beginning with Speaker Sillers and working my way on down to Rep. Eck Windham of Prentiss, a political loon whose name is fittingly made up of the words ‘wind’ and ‘ham.’”

Samples of Williams’ reporting for the Delta Democrat-Times and other Mississippi publications in the early 1970s indicate that demagoguery and insanity had little abated in the 15 years after the denunciation of Carter in the state House. As an example, a lawmaker remarked during debate on an effort to repeal the state’s ban on teaching evolution that his “parents didn’t swing by their tails.”

Another moment of vivid absurdity deals with the willful violation of judicial ethics by a sitting member of the state Supreme Court who refused to step down the from bench while he ran for governor.

“When faced with the choice of violating the canons of ethics or allowing disaster to occur in Mississippi, I chose to violate the canons,” Justice Tom Brady told Williams. The “disaster” in question was the possibility that the brother of slain civil-rights leader Medgar Evers might be elected governor. The year was 1971, a full seven years after Freedom Summer.

The action moves abruptly in 1973 to Charlotte, a decidedly less parochial citadel of the South, with Williams’ hiring at the Observer. There the writer’s range of topics blossomed into a dizzying array.

Over 267 pages, the book assembles some of the best writing of Williams’ career in sections organized with almost scientific precision that reveal the underlying themes and arcs of his intellectual journey.

The history of Mecklenburg County is likely to come across as a bit tedious to a reader who doesn’t live in Charlotte, and a section on battles over purity within the two major political parties does not yield up any great insights. A series on presidential politics that includes editorials on the Iraq wars of both 1991 and 2003 is impressive as a reminder of a time when most metro dailies — not just the New York Times and Washington Post — took seriously their responsibility to explain international affairs.

The constitutional crisis engendered by the effort to impeach President Clinton over a semen-stained dress is scarcely less silly in retrospect than it seemed at the time it occurred. The editorial parsing of proportionality, impeachment versus censure or.judicial finding of fact in this collection is a little bit maddening. In light of Clinton’s role in ramping up mass incarceration and dismantling welfare, along with two wars in the intervening decade since he left office, his impeachment hardly seems like the most salient aspect of his presidency. One pities the editorialist forced by circumstance to confront such triviality.

Many readers will likely take issue with Williams’ support for the 2003 invasion of Iraq. Citing a 1998 argument by Clinton, of all people, Williams wrote in March 2003: “Clinton was right. Bush is right. The international community must stand up to Saddam.”

Not all editorial arguments hold up to posterity; some merely reflect what some people thought at a particular time. Support for the invasion was pervasive within the political and journalistic classes in 2003. Williams either deserves credit for consistency or condemnation for digging in his heels in a 2007 column that recycles discredited arguments about the threat posed by weapons of mass destruction in Iraq.

If you disagree with Williams’ position on the Iraq war, you’re more likely to find him simpatico on matters of business and labor.

About a position taken by Roxboro business leaders in 1977 to discourage industrial recruitment for fear that a unionized company paying relatively high wages would attract workers from existing plants, Williams wrote, “It’s difficult to imagine a strategy more likely to encourage the growth of labor unions.”

More piercingly, he wrote in the aftermath of the tragic Hamlet chicken plant disaster in 1991: “Labor unions have many faults, but they do not sit silently by while bosses deter pilfering by padlocking fire-escape doors.”

The editorials and columns display an uncommon level of texture, revealing Williams to be knowledgeable on the subject of arts and letters, with moving accounts of family life. Some of his writing on sports is hilarious, as in “All Hail, Bahskeet-Baal,” a 1992 editorial welcoming the Atlantic Coast Conference men’s basketball tournament to Charlotte.

“During the annual holy days, cult members gather in large temples to conduct frenzied orgies called Turn-Ah-Mints,” he wrote. “These involve a few priests and many onlookers. The priests (or at some temples, priestesses) are young and scantily clad. They speed haphazardly on a wooden floor, tossing and bouncing a round symbol of Bahskeet-Baal, made from inflated animal skin. Their object is to insert the inflated skin into an elevated metal circle, an act with obvious sexual connotations. Often the insertion is forceful; that produces roars from the onlookers. During the rite, the faithful wave their arms and shout, often to the accompaniment of raucous music. Nubile maidens and muscular lads urge worshippers to heights of frenzy.”

Williams’ experience with the absurdity of Mississippi’s struggle with evolution seems to have equipped him with a sharp aptitude for puncturing religious hypocrisy, as when he wrote about televangelist Jim Bakker in 1989: “In soliciting donations from his flock, a preacher may promise eternal life in a celestial city whose streets are paved with gold, and that’s none of the law’s business. But if he promises an annual free stay in a luxury hotel on Earth, he’d better have the rooms available.”

The tests of Mississippi uniquely prepared Williams for Sen. Jesse Helms, who was elected to the US Senate the year before Williams joined the Observer and died the year he retired from the newspaper.

“Early in his career we called him an effective advocate of a political philosophy we did not share,” Williams wrote. “We considered the way he practiced politics to be divisive and harmful to the state. Over the years his views did not change. Neither did ours.”

GALLERY: Common comes to Greensboro to stump for Biden/Harris

Jordan Green - February 22, 2017 0
If the legislative branch produces any heroes in the effort to uncover the truth about President Trump’s possible collusion with Russia in undermining the...
Loading Comments...
%d bloggers like this: