The National Black Theatre Festival devotes much of its schedule to up-and-coming theater and film crews and avant-garde pieces that wouldn’t find a home anywhere else. To balance the schedule, staples like gospel acts, Broadway revues and classic performances run every night. 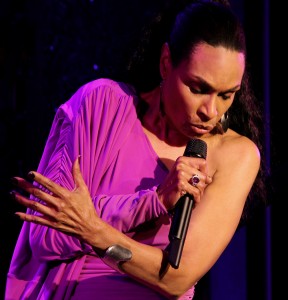 Vivian Reed manages to cram all of these mainstream categories into just one act.

Elements of her entire career make it into the show: years of classical voice training at Julliard with equal time spent onstage at the Apollo Theatre; another decade of dance; her Broadway debut in Bubbling Brown Sugar, for which a role was created just for her; her Josephine Baker years in France, spent interpreting American classics for European audiences and, eventually, on screen portraying the jazz singer in 1987’s La Rumba.

“My act is very eclectic,” she says. “In ‘Strange Fruit,’ we do a classical composition. Everyone has to be trained classically. Nothing is done like you’ve heard it. ‘Fever’ has a different bassline. Funky. ‘Come Rain or Come Shine’ is funky, as opposed to a jazz standard.

“I talk about it in my show,” she continues. “The joy in any performer comes from taking the time to look at a piece of music, see how you can make it your own without disturbing the integrity of the piece.”

A consummate performer, Reed’s career itself provides much of the material for her stage show.

“I speak off the cuff,” she says. “I basically talk about my beginnings. I don’t do these long-ass monologues — I don’t do none of that. Not every song has a setup. But it’s very… when I say personal, it’s like if you would gather a bunch of your friends and say, ‘Sing a few songs for us.’ That’s what it’s like. It’s like sitting in my living room.”[pullquote]

An Evening with Vivian Reed runs Wednesday through Saturday at the Gaines Ballroom at the Embassy Suites. Buy tickets at nbtf.org.

After her voice — discovered in a church choir in Pittsburgh — brought her to Julliard in New York City, she fell in with the crowd at the Apollo. Theater owner Bobby Schiffman became her manager, booking her on nights and weekends while she was studying voice by day.

That, she says, is how she met Bill Cosby, who made his Apollo debut at the time.

“He was just a gentleman,” she says of the now beleaguered actor, who has been accused by several dozen women of sexual assault. “I can only speak on the time I worked with him. I can only speak for myself, and I can’t say that he ever treated me like anything other than a young lady. And I was young, honey. I was one hot little something.”

Her first Tony nomination came from her debut in Bubbling Brown Sugar, largely on the strength of her song-and-dance treatment for “Sweet Georgia Brown” and a big tap number towards the end of the show.

A recording contract brought her through Nashville; movies and television called her to Los Angeles; a stint teaching at the Berklee College of Music gave her a Boston residency.

Over the years she’s crossed paths with Patti LaBelle, Elaine Stritch, Catherine Deneuve, Quincy Jones and Sammy Davis Jr. When she scored a part in the New York production of Don’t Bother Me, I Can’t Cope, she befriended a young Nell Carter, who would soon go on to stardom in Ain’t Misbehavin’ and a starring role in TV’s “Gimme a Break.” Carter died in 2003.

“She did something I should have done,” Reed says now, from her home in New York City. “Universal offered me a [television] contract and I turned them down. I turned down a lot of TV — back then if you did too much TV you couldn’t get into the movies. But [Carter] actually took the deal, and the rest is history.”

The business of show has changed significantly in other ways since she began in the 1970s, as has the artist herself. But she still sees a dearth of opportunity for performers of color, and a strong need for the National Black Theatre Festival.

“You know how many talented African-American artists exist in this world?” she asks. “Some of these wonderful, wonderful, talented people will never see the light of day. Even performers who are extremely established, they don’t have a lot of roles coming to them.

“That’s why I love the festival,” she continues. “It’s a great outlet for a lot of people who would otherwise go unsung. It’s an opportunity for playwrights, for composers and actors to do what they do, and for people to put their shows together and show their talent.

“We need it, honey. And I hope it never goes away.”

Sinbad on Cosby, comedy, the Kardashians and Trump

Staff - September 27, 2018 0
The two biggest news stories of the past week both fall under shade cast by the umbrella of #MeToo. At his sentencing on Monday, Bill...
Loading Comments...
%d bloggers like this: