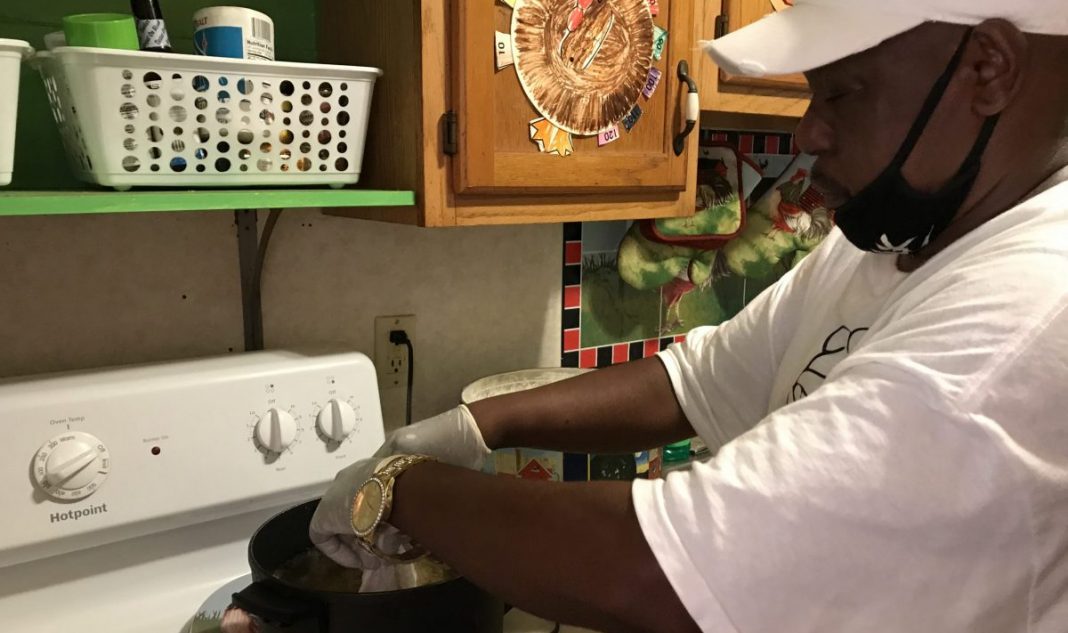 “I make that liquor-house music,” he says. “That Southern soul.”

Tony Davis has been making music since the age of 5, making this year his 50th in the music game. He plays guitar, keyboard, drums and other instruments he kept a secret as he didn’t want to boast. He wrote his first song, “In My Shadow,” in eighth grade. He recently released “Back of the Woods,” a feelgood summer anthem about having a ball at a get-together in the woods. The song was produced by RichTalk, a record label of which Davis is a member. The inspiration for the song came from childhood memories he had of spending time at his grandmother’s house sitting around a table and chairs they’d set up deep in the backyard. Davis says when it comes to writing lyrics, there is no process for him.

“It just comes when it comes.”

The music video, which shows a group of people playing cards, dancing, drinking and conversing in the woods, was filmed in Davis’ backyard, and everyone appearing in the video were family and friends who regularly stop by to visit.

“My backyard reminded me of my grandmother’s house in Burlington,” he says. “So I just decided to write that song, make the video back here and make it look as country as possible.”

Davis chuckles at the fact that during one scene in the video, his next-door neighbor tried to buy a drink at the bar with an EBT card. No one noticed until the video was being edited. They found it so hilarious they decided to let it remain in the video. Davis commented on the fact some people were unhappy with what they deemed as inappropriate dancing with Ming, a family friend, in the video.

“A lot of people were saying, ‘How does your wife let you dance with a woman like that?’ I’m not in this for the sex,” he stresses. “This is entertainment.

“My wife knows what I do,” he continues. “She met me doing music. She says I’m nasty like R. Kelly, but I’m not that nasty!”

Not only can he cook up a good song, he can cook up a good meal. The whole kitchen rings with the sizzle from the deep-fryer as the fish inside turned golden brown.

“I can cook anything Grandma cooked,” says Tony Davis. “They say that’s hard for a city boy to do, but no it ain’t.”

Davis is from Boston but moved to Greensboro in 1968. He attended Dudley High School, but graduated from Page High School. He has always loved to cook, learning how from his family’s Southern matriarchs.

“I watched them a couple times growing up,” he says as he prepares an order for a customer, “and I just never forgot.”

His lifelong dream has been to start a restaurant, and after receiving a push from family and friends, he turned his passion for cooking into Big Belly’s Kitchen last week.

Davis says he named the place for his most prominent feature.

“Big Belly’s trying to make his belly even bigger,” he says with a hearty laugh while rubbing his stomach, dressed in a Big Belly’s T-shirt covered by a black apron.

He currently operates his business from home, implementing safety methods he learned while managing restaurants into his practices, such as frying different items in their own oil. He spent years working as assistant manager at Boston Market. Now, he uses Facebook to advertise, but word of mouth has proven to be just as successful. It only took a few days of business before customers showed up at his house ready to order a Big Belly’s Burger. He also hopes to purchase a Big Belly’s food truck soon.

The Big Belly’s menu includes burgers, chicken, fish and a variety of other entreés and sides. Davis emphasizes the fact that all his sides, such as macaroni and cheese, baked beans and potato salad, are made from scratch. Most people arrive at Davis’ home to pick up their order, but delivery is available for orders over $20.

Underneath the musician and chef is a man who is all about family. Described by his cousin Brad as “the patriarchal glue that holds the family together,” Davis raised nine children alone.

Davis obviously loves his children, but he admitted to clinging to his grandchildren. He even created a game with them called Anteater.

“I used to wrestle with them, and I would literally just fall on the floor and just let them jump on me,” he says. “That’s them eating up the ant.”

In his spare time, he loves watching football and basketball, but baseball has his heart. His loyalty remains to the Boston Red Sox.

“You give me a baseball glove, you got trouble on your hands,” he says. “Cooking and baseball are my dreams.”