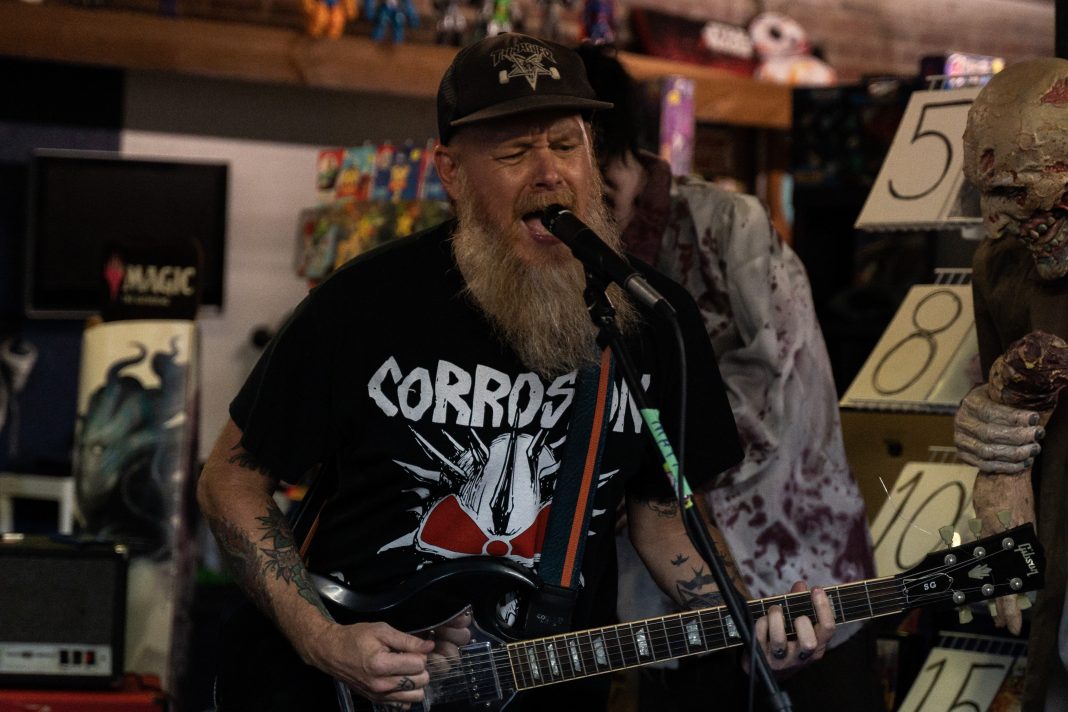 Featured photo: Totally Slow’s frontman Scott Hicks plays at a show in Burlington with his new bandmates. (All photos by Todd Turner)

Scott Hicks, the 48-year-old punk, works the merch table before his gig at a comic shop and video game store in Burlington. He’s got T-shirts and stickers and even some matchbooks bearing logo of the band, Totally Slow, that he’s been associated with since 2012, when he and a few of his buddies got together to record a song against Amendment 1, an effort by the North Carolina Legislature to enshrine a ban on same-sex marriage in the state constitution.

The amendment failed. The band is still here.

There are copies of the new album, too — Casual Drag, on vinyl. It’s the band’s third effort but the first under this new formation, with new bassist Kate Weigand and new guitarist Chuck Johnson joining Hicks and longtime drummer Andy Foster. It’s the first time Hicks participated in a collaborative writing process as opposed to the somewhat dictatorial force he had become under the former configuration.

“It was always, I’m the one with the ideas; I’m the one who’s pushy and obsessive,” he says. “I wanted to make something more collaborative, not the Scott Hicks Show.”

Something else that’s different: This project gained traction, more than Totally Slow’s previous efforts and maybe more than any of his other bands, which go back 30 years. They signed to a label, Refresh Records out of Charlotte, which meant support for marketing, booking, distribution and even merchandise. They’re getting more shows, playing more festivals, reaching more ears.

Hicks, who started as a touring musician before he even graduated high school, acknowledges that this may be his biggest musical project yet. But he’s a veteran of the industry, with “many hundreds” of live shows under his belt. Plus he’s been married, had kids, built a career. This is just one more thing.

“I would say it did change my life,” he says, “but my life changes every day. Not to get overly corny with the Buddhist stuff.

“There’s no hope that I’m ever gonna be a famous rock star,” he continues. “That’s never been the metric at all. But I can make a cool thing, and have it. There’s other things that flow from it. Shows. I’m doing this interview. I see every single thing that comes from it as gravy.”

They’re hitting the festival circuit, such as it is, this summer, including a day party at Hopscotch. They’ve got gigs booked at the biggest rock clubs within driving distance — the Cave in Chapel Hill, the Pour House in Raleigh. Their album release party last week at the Flat Iron in the band’s home town of Greensboro filled the joint.

“Sometimes we do big things,” Hicks says, “and sometimes I still play to 12 people.”

Nestled behind a tiny parking strip in downtown Burlington in between a wooded lot and a residential home, Game Over sells comics and vintage video games; its occasional live shows comprise perhaps one-third of Burlington’s punk scene. It’s the last event of a summertime, Saturday-night music series that has Totally Slow sharing the bill with Rocket 77 out of Wilmington and Orphan Riot, comprised of a couple of local high-schoolers and a fill-in drummer who wears Vans but looks like he has a day job.

“We’ve been doing this all summer long,” says shop owner Darian Stokes, known in the community as Sensei. “There’s nothing for kids, and even some adults, to do in Burlington that’s fun.”

It’s an all-ages show — no drugs, no alcohol. The stage takes up most of the room, a wooden plank laid atop a bed of old tires, leaving the crowd to mingle in the periphery. Their black T-shirts indicate their musical allegiances: the Ramones, Joy Division, Rancid, Teenage Bottle Rocket, Corrosion of Conformity, Johnny Cash, the Joe Strummer Foundation, plus a black Suicidal Tendencies ballcap with the brim flipped.

As Totally Slow sets up after Orphan Riot’s set, the opening band’s frontman takes his place at the front of the stage with three other teenagers who make up perhaps half of the paying audience. No matter — they’ll carry on as if they’re in the packed basement of some DIY venue or a dingy city club anyway. This definitely counts as a punk show.

“I like your glasses,” Hicks says to the kid in the black Ramones T-shirt, before imploring everyone to support the comic shop.

“Be thankful for what you have,” he says on stage, “because you won’t always have it.”

Totally Slow opens with “Needle,” a driving burner laden with crunches and riffs, a strong but accessible melody, a message about opiates both literal and figurative. It’s the song that got them signed, Hicks says. Like a lot of their material, it harkens back to the conventions of punk without being entirely in service to them. And like the rest of them it clocks in well below the three-minute threshold, with the exception of the final cut, “I Yield My Time, Fuck You,” which runs 4:33, the punk rock equivalent of decadent indulgence.

“I don’t know if ‘traditional punk’ is a thing,” Hicks says. “We’re definitely not playing whatever the cool version of punk is now. It’s definitely doing some things that are kind of unexpected — it’s not like a Ramones cover album. We come from a tradition of, you present what comes honest to you and you do it as best you can. What came honest to me was that sort of surf-y, sort of fast, angry, raw kind of thing.

Back onstage, Hicks sweats through the set, a dynamic frontman with chops honed through his years of service.

He’s not technically old, but he’s getting there, with streaks of gray in his wispy, red beard and a ballcap obscuring the indignities time has imposed on his hairline. He’ll be 49 in November. Whatever.

“I don’t know, man, I feel like ageism is the next frontier,” he says. “There’s a lot of energy out there to stop discounting people older than you who are creating things. Why, at any certain age, is the creating of things any less valuable?”

He was in his first band in 1988, Rights Reserved, which put out a 7-inch album before he turned 18. After touring for years, they broke up and reformed without the guitarist as Eagle Bravo. He got married in 1997 and started his family, resurfacing briefly for a stint in Manamid, “Like a pyramid of men,” Hicks says, straight-faced. which a Facebook page claims started in 2001, and “played hundreds of shows to handfuls of people.” An untitled EP hit Bandcamp in 2013.Then he fell out again for a bit, coming back to it for Decoration Ghost, a kind of Greensboro supergroup formed around bassist Tim LaFollette during the early days of his battle against ALS. Afterwards came Totally Slow, which initially was a group of friends who gathered to make a punk cover of a political protest song. That configuration lasted through two albums and eight years of NC shows. Those personal relationships made the lineup change difficult.
“That was horrible,” Hicks says, “having to ask someone to leave. I knew it was going to be hurtful, but I knew there were more creative things I wanted to do with what this thing is. It was either gonna be stop, or change things up.

While members of headliner Rocket 77 nod their heads appreciatively in the background, the young acolytes cavort at the front of the stage, absorbing the lessons offered. Somewhere between the fourth and fifth songs, the guitarist from Orphan Riot changes into a black Totally Slow T-shirt in the bathroom of the comic shop. And now they’re moshing loosely, a kick dance with arms akimbo. One by one, they spin-jump off the edge of the performance platform. And then they each put a foot on the edge of the stage on front of Hicks and start headbanging.

Hicks, who still has a carbine hook holding dozens of keys clipped to his belt, takes in this audience energy and gives it back to them. The feedback loop grows and swells until the guitarist of Rocket 77, swept up in the moment, dances to the back of the comic shop and swaps out his Joy Division T-shirt for a Totally Slow one.

And it isn’t even black.

Totally Slow plays Sept. 3 at Snug Harbor in Charlotte, followed by a Hopscotch Thursday day party in Raleigh at the Pour House, then a show on Sept. 25 at the Cave in Chapel Hill. Find their music on Bandcamp and follow them on Facebook and Instagram.

A Valentine from Daddy Issues

Brian Clarey - February 18, 2015 1
by Anthony Harrison Though she probably doesn’t remember this, I once asked Lauren Holt, Daddy Issues’ front woman, to be in a band with me. See,...
Loading Comments...
%d bloggers like this: