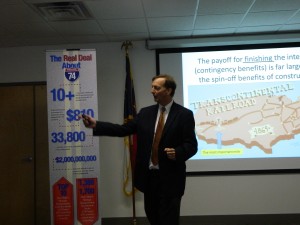 Elected leaders look to revitalize a neglected corner of Winston-Salem and open markets for High Point goods through completion of a leg of Interstate 74 through Forsyth County.

Craig J. Richardson, an economist at Winston-Salem State University, once wrote a paper for the libertarian Cato Institute entitled “The Loss of Property Rights and the Collapse of Zimbabwe.”

While researching the stalled-out Interstate 74 project in Forsyth County for the Winston-Salem Chamber of Commerce, he found himself in familiar territory.

“It reminded me of Zimbabwe,” he said. “In America, we would think that people would be able to have life, liberty and property.”

Whether hyperbolic or not, Richardson’s remarks at a presentation hosted by the Winston-Salem Chamber of Commerce on June 18 captured the frustration felt by the city’s business leaders.

Thousands of property owners in the path of the future Interstate 74, also known as the eastern segment of the Northern Beltway, are forbidden from obtaining building permits and unable to find buyers for their houses. Richardson and Zagros Madjd-Sadjadi, also an economist at Winston-Salem State, determined that the state Department of Transportation has acquired 463 properties in the path of the planned interstate, resulting in a loss of $2.5 million in tax revenue to Forsyth County.

“This is a very odd thing that the state is competing in the rental market,” Richardson said.

Compounding the loss to property values due to loss of demand and neglect, Richardson noted that there’s also less demand for Home Depot stores and the services of plumbers and carpenters in the area.

The road project dates back to 1987, when it was adopted as part of the Winston-Salem/Forsyth County Thoroughfare Project. Over the past two decades it has stalled twice because of environmental lawsuits, doubling in cost as a result. In 2011, then-Gov. Bev Perdue announced an acceleration in the project, leading to right-of-way acquisition a year later. Then, earlier this year, under a new ranking system adopted under Gov. Pat McCrory, the Interstate 74 project dropped to near bottom as plans to complete the Urban Loop and Interstate 73 in neighboring Guilford County hurtled forward.

Business leaders in Forsyth County and Winston-Salem see the project as vital to economic development efforts. Elected officials in Winston-Salem have an additional reason to back the project: It would relieve traffic on the congested Highway 52, which currently carries the load of traffic from Greensboro and points east onto northbound Interstate 77 heading into Virginia and West Virginia.

While highlighting the injustice to suburban property owners in the beltline area threading through parts of Winston-Salem, Kernersville and Walkertown, a research paper by Richardson, Madjd-Sadjadi and fellow Winston-Salem State professor Joel F. Kincaid also underscores the county’s need for economic development.

Marshaling support for their case, the authors cite an article in the site-selection magazine Area Development finding that the Winston-Salem metro area ranks last among the five most populous metro areas in the state in terms of economic strength, behind Greensboro-High Point, Durham, Raleigh-Cary and Charlotte. “One critical difference” between Winston-Salem and the others, they argue, “is the presence of urban loops either completed or further along in construction.”

The economists estimate that an investment by the state of $142.8 million to complete the Interstate 74 project through Forsyth County will result in about $270 million in new economic activity per year upon completion and will nearly double the county’s growth rate.

Interstate 74 currently runs from Winston-Salem to High Point, and then concurrently with Interstate 73 south to Rockingham, before branching off to the east toward Lumberton. A Midwestern section of the interstate runs from Davenport, Iowa to Cincinnati, but the states of Ohio and West Virginia have not made any investments in the roadway.

“If you build this interstate we’re actually arguing that the biggest beneficiary will be Guilford County, for one reason because they have the largest population,” Madjd-Sadjadi said. “But also because you have certain land-locking connections. It’s harder to develop in Forsyth County than Guilford County, which has a little more wide availability of tracts of land.”

The study estimates that completion of the project would increase permanent employment in Guilford County by 12,500 compared to 8,800 in Forsyth by attracting investment through increased productivity.

The most significant benefit is likely to go to High Point and the area of Greensboro around Piedmont Triad International Airport.

“The construction of I-74 will go a long way towards ensuring that FedEx is able to maximize the value of its investment and create over a thousand highly paid jobs,” the authors write.

Completion of the section is also likely to shore up Ralph Lauren’s investment in High Point. The apparel company owns an 805,000-square-foot E-commerce distribution center on North Pendleton Street with access to Interstate 74. And a company executive signed an agreement to lease 116 acres of land annexed by the city of High Point in southeastern Forsyth County known as the I-74 Corporate Park. The city has agreed to run water and sewer out to the site. Ralph Lauren noted in its most recent annual report that “the purchase and expansion of a distribution facility in High Point” ranks among its four most significant investments.

Greensboro Mayor Nancy Vaughan said she support Winston-Salem’s efforts to get the Interstate 74 project underway, but emphasized the paramount importance of finishing the Urban Loop around Greensboro.

“We were very fortunate for what we got in anticipated funding from the state this year,” Vaughan said. “That really goes back to the groundwork that has been laid in the past 10 to 15 years. We have already put a lot of work into our environmental assessments. We laid the groundwork for what we got this past budget year a long time ago.

“Our success as a distribution hub doesn’t stop at our borders,” she added. “We have to be able to hook up to other places with ease. If it’s a bonus for the region it’s something we would have to look at.”

Support for good roads is practically gospel in North Carolina, but at least one local lawmaker can be counted as an apostate.

“These loops are not sustainable,” said state Rep. Marcus Brandon, a Democrat who is considering a run for mayor of High Point. “I think we could be spending our money creating infrastructure for public transportation. My generation is going to have to consider us being the third fastest growing state. We’re going to have to consider mass transit. I thought that money could be used better to improve the train tracks down [Interstate] 40 to create an Amtrak connection in Winston-Salem.”

Brandon said he accepts that completion of Interstate 74 through Forsyth County would enhance economic development, but only to a point.

“We can get places,” he said. “We don’t have traffic here in North Carolina. It’s not a problem. Anybody who wants to get something to Winston-Salem has a way to do that. You’ve had RJ Reynolds there for years. They’ve never had a problem getting stuff in and out of there.”

A more localized effect of completing the project would be to shift traffic — and roadside service businesses such as gas stations, fast-food restaurants and motels — from Highway 52 to the future Interstate 74. Traffic is currently routed through the relatively poor, predominantly African-American northeast quadrant of the city.

“The people who are quote-unquote harmed by this connection are currently benefiting at the expense of people who would benefit from all of this,” Madjd-Sadjadi said. “But because the total amount of economic activity would rise by a considerable amount, guess what happens? We can compensate the losers in such a situation.”

An outspoken environmentalist who serves with other elected officials on the Winston-Salem area transportation advisory committee, Besse said it’s reasonable to question whether urban loops promote sprawl development. But in this case he thinks there’s a strong case to be made for completion of the project.

“First, there is a genuine safety and congestion issue on US 52, and a lot of the traffic load could be taken off; the truck traffic could be relieved substantially by the I-74 loop,” he said. “Second, one of the problems with Winston-Salem is we have tended to sprawl to the northwest to a degree that has imbalanced a lot of our system. That tendency helped shortchange efforts to revitalize our east and northeast of our city particularly. I think it would be a helpful balancing factor to have transportation improvements to our northeast to help us in our efforts to revitalize economically our northeastern city area.”

Joel Sronce - February 1, 2017 0
On a brisk Friday morning, more than 100 opponents and a couple dozen members of the media attended a press conference in Greensboro’s government...
Loading Comments...
%d bloggers like this: