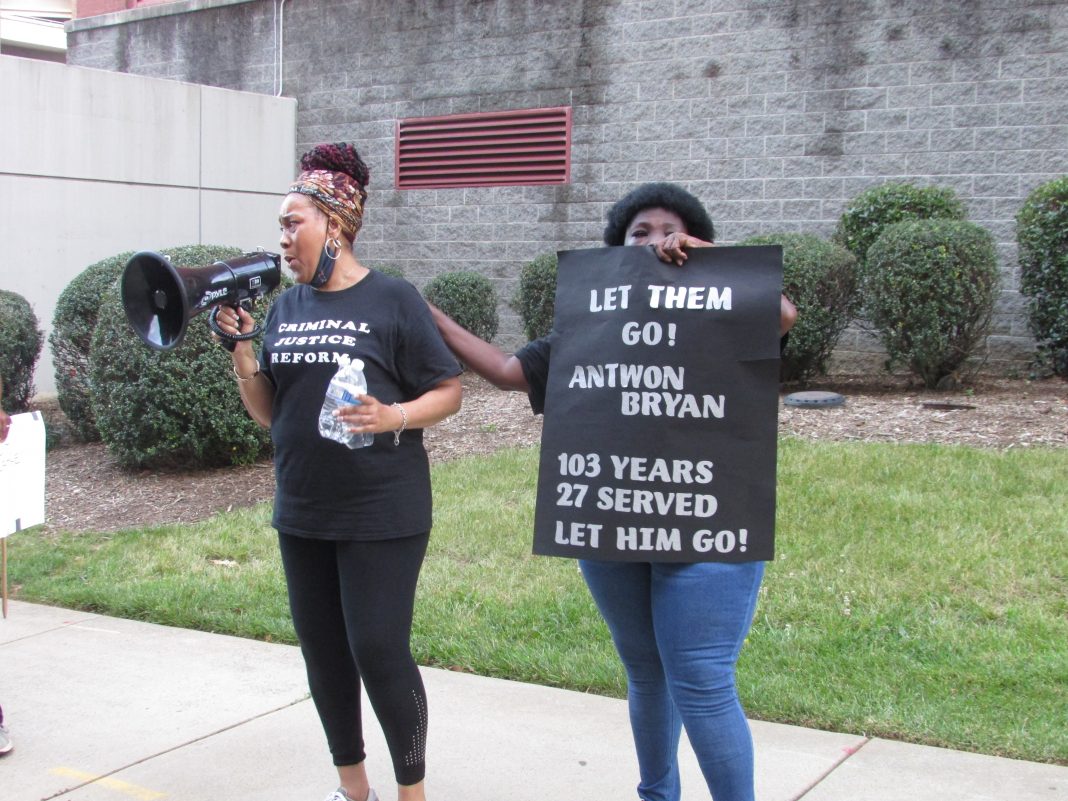 More than 100 people marched on the Forsyth County jail on Saturday night in a Black Lives Matter protest that linked the police killings of Black people like George Floyd and the toppling of Confederate monuments to the disproportionate incarceration of people of color.

“We are also here to stand in solidarity with our incarcerated sisters and brothers and nonbinary folk, as well as everyone in our community that has been snatched up in this system of injustice,” said Tony Ndege, an organizer with Black Lives Matter Winston-Salem, during a speak-out at Winston Square Park that proceeded the march. “We all know that there is more than one system of incarceration in this country. There’s one system for those who cannot afford proper representation. There’s another system for those who can, those who are fortunate enough to be assigned a lawyer who cares enough about what they’re going through and has the capacity to serve them — that’s the luck of the draw for them. But there’s a third system of injustice in this country, and that is for those who are in power, who control the politicians, who write the laws that make their crimes against us legal, their fraud legal, their theft of our economy legal, their destruction of our planet and its ecosystems legal.”

Along with Black Lives Matter Winston-Salem, the rally was jointly sponsored by Prisoner Outreach Initiative, Siembra NC, Drum Majors Alliance and Winston For Peace. Along with familiar names like George Floyd, the man killed by a Minneapolis police officer in late May, and Breonna Taylor, a woman killed by Louisville, Ky. police during a no-knock raid in March, the protesters added the names of three people who either died in the Forsyth County jail or died after being released from jail to a hospital for a serious health issue.

Ndege noted the death of Deshawn Lamont Coley, a Black man who died in Forsyth County jail on May 2, 2017.

“Three years ago, we found that Deshawn Lamont Coley… had died from complications from asthma,” Ndege said. “His mother called them and begged them to intervene. Jail staff ignored many requests for medical attention, including one note when he wrote his life was in jeopardy.

“Just two weeks later, we were horrified to hear about another unnecessary death in the Forsyth County detention center,” Ndege continued. “Stephen Antwon Patterson died from complications from high blood pressure. Again, he had also begged for his life, and his pleas to the jail staff… jail staff did not listen to his pleas for help and medical assistance. He lost his life as well, less than one month after Deshawn Coley. Why did this happen? Because the pain and the suffering that Black and Brown people go through did not matter, and the suffering of incarcerated people matters even less.”

Ndege paused while he rifled through his notes searching for the third name, which was only reported yesterday in the Raleigh News & Observer and the Winston-Salem Journal. The News & Observer reported that John Neville, a 57-year-old Black man from Greensboro was arrested on a warrant during a traffic stop by Kernersville police and booked in the Forsyth County jail on Dec. 1, 2019. In less than a day, the newspaper reported, Neville wound up in the hospital. Neville’s death is under investigation by the SBI, but no video has been released and the autopsy report remains incomplete.

“Racial bias keeps more people of color in prisons and on probation than ever before,” Sara Hines told the group gathered at Winston Square Park. “Black people are subject to pre-trial detention at a higher rate than white arrestees, with similar charges and histories. Extreme sentencing laws and practices are keeping people in prison for far longer than ever before. The result is more people are spending more of their lives in prison than at any point in US history.”

Hines mentioned the case of Antwon Bryan, whose mother attended the rally and march. Bryan received a 20-year sentence for armed robbery in Forsyth County in 1993. Now 44, Bryan has served 27 years of what became a 103-year sentence due to 29 prison infractions, from rioting to substance possession. He is housed in Harnett Correctional Institution.

“Excessive sentences like that of Antwon Bryan are not effective deterrents, and they destroy a person’s chance at rehabilitation, reunification and reintegration into society,” Hines said. “Convictions disproportionately affecting poor people and people of color, these sentences are exacerbating extreme racial disparities in the criminal justice system, and they are tearing vulnerable communities apart.”

Marching down the Restaurant Row stretch of Fourth Street from Winston Square Park to the jail and back, protesters were greeted with fists raised in solidarity, applause and cheering from patrons at Xcaret Mexican Grill & Cantina, Mellow Mushroom and Jeffrey Adams. Marchers carried placards articulating four demands: seven masks per week for incarcerated people; regular testing for officers and on-demand testing for people detained; release people from the jail, starting with the most vulnerable; and free postage/phone calls for incarcerated people until family visits are reinstated. The Forsyth County Sheriff’s Office has already acceded to one of the demands, after announcing on Wednesday that all people housed at the jail will be tested for COVID-19.

At the jail, protesters read letters from people in detention. Chris Lutz of Prisoner Outreach Initiative said volunteers wrote 240 letters to people in the jail.

One inmate, who was not named, indicated getting tested was not easy prior to Wednesday’s announcement, and said staff is not taking adequate precautions to protect residents. The sheriff’s office announced two weeks ago that five detention officers have tested positive for coronavirus.

“Many of the officers don’t wear gloves or use hand sanitizer,” the detained person said in a letter read aloud by Eric Weiss, a candidate for Forsyth County Commission. “Some officers don’t wear masks when coming from the street either. As far as an inmate wanting to be tested, if you want to be tested, they threaten to take privileges or remove you from population and isolate you for 14 days is what they’re telling us. As far as symptoms, they only check temperatures, that’s it. I would love to be tested. We were offered masks 6-16, still not allowed gloves or allowed to use sanitizer. No, I’m not happy with the preventative measures this facility has taken. They were only doing it to cover their ass from a lawsuit.”

The correspondent, who suffers from asthma, wrote, “Sad to say, all the inhalers on the med cart are all kept in a Ziplock bag with 40 other individuals’ names on them, and some with mouth covers, and some not.”

They signed off: “Inmate lives matter.”

Protesters waved at inmates in the jail, shouting, “You all matter,” and, “We see you, we love you.”

The Rev. Terrance Hawkins of Drum Majors Alliance invoked Martin Luther King Jr. during remarks outside the jail. Noting that King said, “Injustice anywhere is a threat to justice everywhere, Hawkins said, “Infection in our detention center is threat to infection in our broader community.”

One protester said they wants to abolish the carceral system of jails and prisons, not reform it.

“Over 90 percent of people who go to prison and jail will come back out into society; they don’t go away,” they said. “What happens when they’re inside? Inside is just more trauma. People leave with the same problems they went in with, and more new ones, with drug problems, with families that have been fractured for decades, with an economic cap on their life. They won’t be able to have access to jobs and housing that they used to have.

“The Prisoner Outreach Initiative is a prison abolitionist organization,” they continued. “We work towards reforms, with our end goal as abolition. We don’t believe we can save this. As Martin Luther King said towards the end of his life, he felt like he led his people into a burning building. We already know it’s on fire.”

GALLERY: Cops disrupt march to the polls in Graham