I’ve never seen so much viognier in the same place, not even at a wine shop.

I forgot how much the North Carolina wine scene is dominated by sweet wines, some of them overly so and several of them designed for dessert, until I stepped up to my second or third tent at Salute Wine Festival last weekend. Blame it on the indigenous muscadine grape, the climate or the consumers, but for whatever reason, Carolinians appear to like their wine as sweet as their tea.

We showed up midway through the affair, knowing that five hours of day drinking in concentrated, small sips might be too much of a precursor to a cookout in Winston-Salem’s Ardmore neighborhood that evening. Moving from booth to booth with my girlfriend Kacie, line-hopping for the shortest wait, we repeatedly saw signs for beverages other than wine.

Admittedly most were wine influenced, like a wine slushy from Rocky River Vineyards east of Charlotte, a truly fantastic concoction involving the vineyard’s White Gold muscadine wine and its pinot grigio. Others couldn’t be classified as wine at all; if it ain’t from a grape it ain’t wine, but we mused that an alcoholic blueberry juice could make a good adult Popsicle, one of the things we’ve added to a summer bucket list.

I remember being overwhelmed by fruit-forward, sweet wines at past iterations of Salute, but either the viogniers are new or I forgot them. Our late arrival kept our buzzes in check, though it also meant we didn’t reach every one of the vineyards represented, so it’s possible a few standouts were overlooked. But from the crop we caught, one viognier stood above the rest. 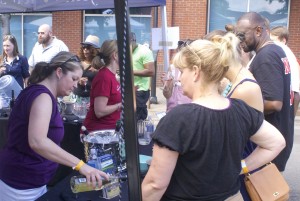 Jones von Drehle, a vineyard about the age of 2 from western Surry County near Stone Mountain, plied a viognier with more dimension and less heavy-handed sweetness than the others we sampled. It’s a white wine known for its peach flavor and inability to age well, and Jones von Drehle’s product manages to deliver the goods without smacking you across the face with it.

The vineyard’s Dulcimer wine, the name for its rosé, was also the best of the bunch we found, and the merlot provided a nice change of pace from many of the wines available that hot Saturday afternoon on downtown Fourth Street.

It was with great satisfaction that we learned, after running into preeminent Winston-Salem foodie Nikki Miller-Ka, that Jones von Drehle is one of the darlings of the state’s wine scene at present. Guess we know what we’re talking about after all.

Miller-Ka directed us to Jolo Winery & Vineyards from Pilot Mountain, the other rising star, she said. We found the vineyard — whose name will always remind me of YOLO, thanks to Drake — at the end of a line-up on a side street, almost forgotten at the end with barely a line to speak of. 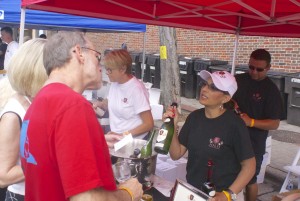 Jolo brought three wines to the gun show, including its dry red blend that won silver in Sonoma and a dry white that took gold in Asheville, as well as a sweet white that was a far cry from the bludgeons of sugar other vineyards were peddling. In short — the hype is on the money.

The list of impressive vineyards extends beyond two, of course; we ran into trustworthy friends leaving with a box of three reds from Sanctuary Vineyards, a booth we didn’t catch, and three red bottles from Mocksville-based RayLen, a vineyard I noted that I enjoyed as well.

There’s plenty more that we missed, like the fried Oreos, and others we could’ve done without, like a blackberry “wine” or $5 bottles from Cauble Creek in Salisbury. But we left more than satisfied, making plans for a pit stop after a day hike near Jones von Drehle and wondering what next year at Salute would hold.

If you’re reading this it’s too late to attend Salute, but take care to check out Jones von Drehle and Jolo Winery & Vineyards online. You can thank me later.