The most anti-urban city in the Triad, paradoxically, becomes the most urban when, for two weeks out of the year, 75,000 visitors from around the world are grafted into the central business district to exhibit and buy home furnishings, network and cultivate tastes.

While High Point residents prefer to drive the lengths of North Main Street and Eastchester Drive to indulge their appetites for barbecue, seafood and pizza, visitors to the home-furnishings market leave their cars behind at the park-and-ride lots and hop on rubber-tire trolleys to get to the central business district. They take two circulator buses around the 13-square-block area where the showrooms are concentrated. If they want a more exotic experience, there are guys pedaling rickshaw bicycles available for hire. But mostly, they walk — in small knots or alone, with purposeful strides, alert to peripheral phenomena and shielding their interior moods. When they run across professional colleagues or old acquaintances, their private guardedness turns into an affectionate greeting or amiable chatter.

A city where locals prefer to drive up to a post office or gas station to pick up a newspaper rather than walk into a coffeehouse, High Point suddenly transforms into the most transit- and pedestrian-friendly city in North Carolina.

A city where Jim Corey, a candidate for city council, has scoffed at the notion that residents would want to walk down Main Street or gather for street festivals contorts itself to meet the needs of a transplanted set of people who come to High Point to do just that.

Whether the buyers come from Tunisia or China, they share a sleek look common to urban citizens the world over — women wisely appraising their surroundings through oversized sunglasses, men dressed in black jackets and designer jeans with styled hair. Young old, women and men — they’re slender, built more for speed than comfort.

I’m frequently prone to private amusement at the thought that a mural outside High Point Theatre depicting plein air painting and a saxophone player might actually inspire someone to undertake one of those activities and face some kind of fine for violating a city ordinance. But during market, public art and street music are not at all out of place. A replica of a tattered 19th Century sailboat occupies part of the sidewalk alongside the Radio Building, and a saxophonist blows near the corner of South Main and Commerce.

Aside from the exquisite Penny Path Café and the Dog House — recommended by designer Jason Oliver Nixon — there are hardly any restaurants in the central business district. The influx of visitors twice a year doesn’t create any demand for dining — either during market or throughout the remainder of the year. The reason for this is that exhibitors are plying the buyers with free food, along with coffee, chocolate and cocktails to grease the skids of business.

As High Point Market Authority Chief Operating Officer Tammy Nagem said during an orientation session on Sunday, “If you are a buyer and you pay for food and drink, you’re doing it wrong. If, on a whim, you need chocolate, a drink or an apple, someone should be there to give it to you. If there’s a way for us to keep you shopping we will do it.”

The same basic spread put out for the buyers in the High Point Theatre is also available to press — for breakfast, sausage and biscuits on Sunday and frittata on Monday, with a choice of slow-roasted beef or fried chicken for lunch on Sunday. Covering the market, like coming as a buyer, also carries the privilege of complimentary massages. 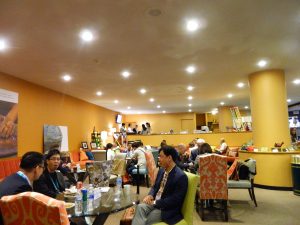 Although I did not experience it firsthand, the way to really eat at market is to hit the showrooms. Pat Plaxico, the retired designer, suggested that I check out the chair collection at the Tomlinson Erwin-Lambeth showroom on North Wrenn Street, noting that they also have a reputation for serving excellent lasagna. She said the French Connection showroom even brings in a French chef.

If only we could have it this way all the time — a trolley waiting to take us to the park-and-ride lot or a shuttle bus to the airport, a free cup of coffee or bite to eat there for the taking. The truth is, of course, that the cost of those amenities is absorbed through the massive orders placed by buyers for wholesale home-furnishing products. If we really want those amenities year-round in High Point, we have to be willing to pay for them.

Brian Clarey - December 23, 2014 0
3. Winston-Salem We’re analyzing traffic data in the Power Ranking this week, with an eye towards the worst intersections in each city — that is,...
Loading Comments...
%d bloggers like this: