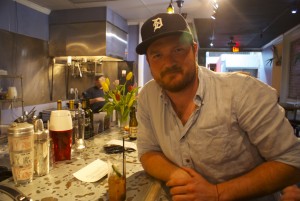 Saying, “It is what it is” is a cop-out. Things don’t just happen. People work for them; they dig in. They assess, pivot, respond and reinvent. They campaign for what they wish to see, and champion the ideas that illustrate their points.

But more importantly, they connect with others. They bounce ideas, and share plans.

An idea from Steven Johnson’s book Where Good Ideas Come From: The Natural History of Innovation has been ricocheting around in my head since I read it; There are a lot of similarities between social networks and the neural networks of an individual brain. Ideas aren’t so much single things as they are specific patterns or combinations of connections, and they come into being over time, even if we aren’t consciously aware of it. If you’ve spent much time with children, you’ve seen it happen. “Cat!” might mean any animal, or anything that’s soft, or even anything they want to know if it’s okay for them to touch. They recognize significance first, and then over time accumulate specific meaning and context. Kids teach us just how good we are as pattern-recognition machines.

Social movements are the same, of course. They don’t just pop spontaneously into being. They take many individual connections to build up, to coalesce. Triad City Beat dedicates a good number of column inches to all the new craft breweries opening, so let’s use that as an example. Obviously, there was no single sudden epiphany, that maybe today’s beer could be more than Budweiser. It built up over time, even here in the Triad. People had lots of individual conversations about different projects in the works locally and nationally, their personal preferences, viability of business models and so on. Only after a whole lot of loose connections were made did anything identifiable as an idea for a new brewery start to exist.

The little things add up.

Wouldn’t it be great if we as a community, as a city, as a people could somehow cultivate the interactions that lead up to these big ideas? Maybe we can. Steven Johnson goes on to explain what he dubs “liquid networks.” To set the stage, imagine each of us, and our brains and ideas, as a molecule bouncing around. In a solid, we would be too locked in to really get much exchange going. Imagine the classic office space filled with people who are all just sitting and working, together and yet totally alone. The solid, the cube, the cubicle.

On the other end of the spectrum, we have gasses. In this scenario, there’s just too much energy flying around. The chaos of it all tears apart any developing structure before most people would ever recognize it as something meaningful. Imagine the old college house party, exploding with attention-deficit indulgence. It takes five minutes just to explain to your friend that you’re going to grab a drink, only to have them dance away nodding with not even the slightest idea of what you were trying to communicate.

Both of these things are extremes, but you get the idea. This is a spectrum, and there’s probably a sweet spot we could aim to hit. Imagine now that the perfect state of social exchange is a liquid, where we move about relatively unimpeded, but still with a bit of self-affirming cohesion. The social example here might be something like a high-functioning cocktail party, the kind where you introduce your bartender buddy to an old friend who is now an ethnobotanist or whatever. Or the classic example: a really good surprise conversation at the coffee shop.

This all sounds nice, sure, but is it actionable? What could any of us actually do? Actually, Triad City Beat editor Eric Ginsburg is already setting a nice example with his piece about “people who should talk” a couple of months ago. This does two things that are key: increases the likelihood (and probably the sheer number) of novel exchanges, and sets up new potential for social cohesion — that is, people like the new stuff they’re talking about, and they keep talking about it.

Another great thing about this kind of thinking is that it’s invitational. There are small things that any of us can do to help liquefy our own networks. Share the article that made you think of someone, or better yet, invite that person for coffee. Bring a friend. It’s not a bad way to spend a few minutes, and you’ll get the +1 of warm fuzziness for knowing you’ve increased the overall intellectual output of your community by uniting small exchanges into more mean meaningful patterns. That’s a high-functioning warm fuzzy, I dare say.

Sam Bridges is an independent graphic designer and art director who has a very goofy laugh and lives in Greensboro. Visit sfbridges.com to see his work or start a conversation.

Jordan Green - July 31, 2018 1
The city of Greensboro loaned $375,000 to help a restaurateur realize the dream of opening a multiplex food-service hub. Now, restaurateur Lee Comer is...
Loading Comments...
%d bloggers like this: