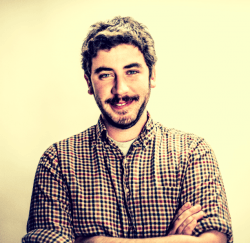 While recently checking the spelling of chicharrón, or fried pork, I accidentally typed “chicharroni” into my search tab. What started as a mistake turned into a joke about combining chicharrón and pepperoni, but now I’m convinced it was a (key)stroke of genius.

There are a variety of types of chicharrón, but the Central American traditions I’m used to consist primarily of ground pork, or sometimes chunks. As far as I can tell, the best way to consume them is in Salvadoran-style pupusas. Regular readers might be sick of me bringing up the national dish, but in case you’re not familiar, picture a thick, handmade tortilla almost like a pancake. Pupusas generally come with chicharrón, cheese, beans or some combo therein, stuffed in the center, and just two can fill you up instantly. Naturally, I prefer the meat and cheese option.

But what if someone added pepperoni to pupusas revueltas?

The recipe adjustment is simple: just add some pepperoni into the mix with the pork and cheese, and you’ve created the perfect Salvadoran-American fusion cuisine. It’s almost like a homemade Hot Pocket, Salvadoran style.

I can practically smell the pepperoni fusing with the soft quesillo cheese as pupusas cook on a flattop grill.

Chicharrónis could actually be any number of things, including adding chicharrón and pepperoni together in a calzone. Stop and think about that for a second.

Now quick, somebody copyright the term, register a company under the same name, and start releasing various product lines capitalizing on my ingenuity. All I ask is a little kickback, a free lifetime supply and that you start with pupusas.

There are more than a million Salvadorans living in the United States, thanks in large part to a brutal military regime backed by the US government, particularly during 12 years of civil war that ended in 1992. But the only thing I’ve seen here that approaches Salvadoran fusion food are the restaurants serving distinct dishes from a handful of Latin American countries. I’m sure plenty of people have experimented in their home kitchens, but I’ve yet to find a public crossover.

Pupusas aren’t easy to make, and though I received an impromptu lesson once in a rural Salvadoran kitchen, patting the dough back and forth between my hands, I’d rather leave this one to the pros at places like El Triunfo in Winston-Salem and Manny’s Universal Café in Greensboro. Maybe you grew up making them, or feel adventurous and skilled enough to make the attempt.

Somebody please try this, and invite me over to taste the second batch. And if you run a restaurant that serves Salvadoran cuisine, I implore you to offer this as a special. I’ll even help you promote the event.