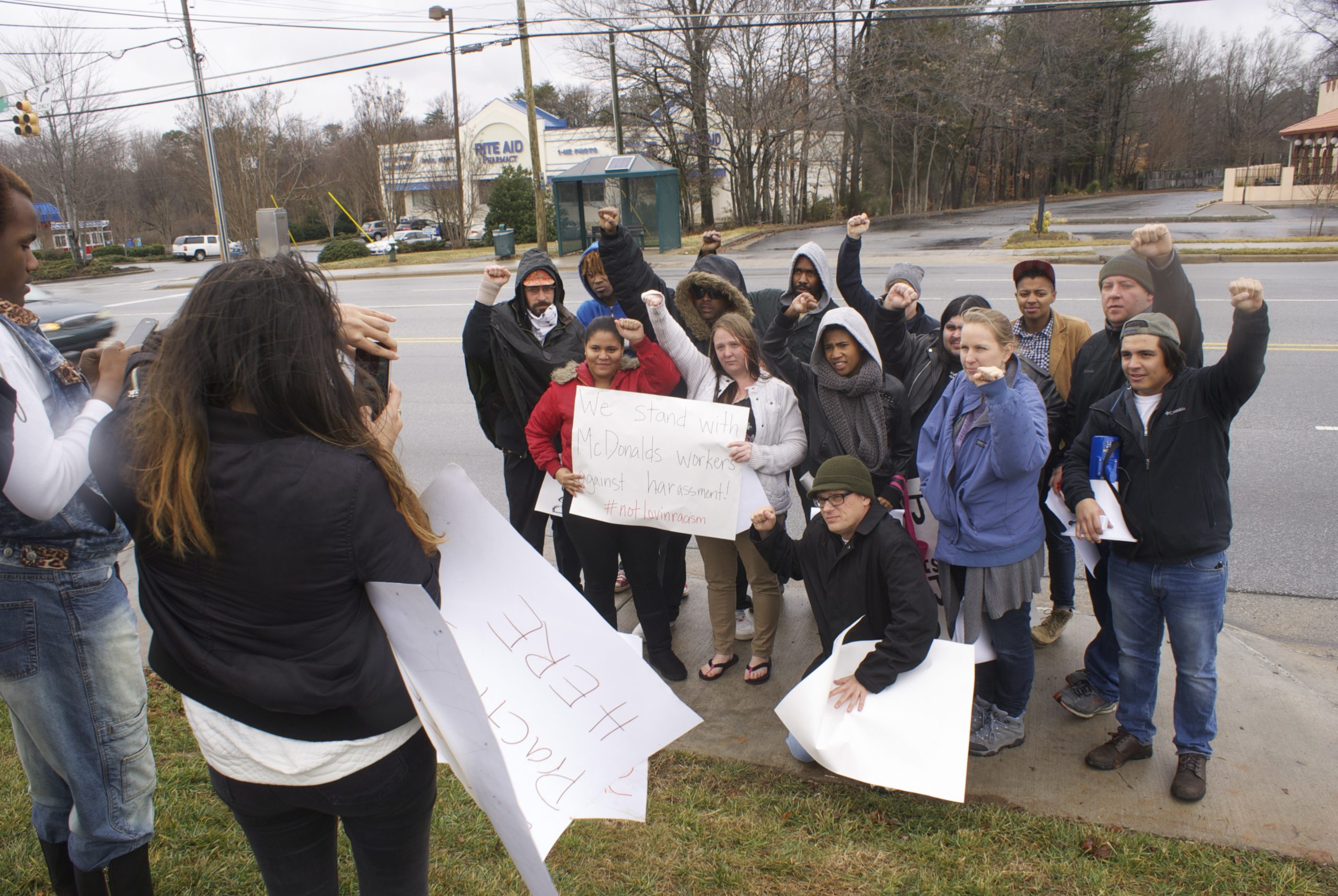 After a woman is fired for organizing at a local Wendy’s, workers and their allies stage an innovative sit-in action at the chain’s West Market Street location in Greensboro.

Crystal Price waited in the Wells Fargo parking lot next door, holding back in the dreary weather and sporadic light rain as her supporters filed into Wendy’s in small groups. Most of them bought coffee before taking a seat, and a friend sat with Price’s two young kids as they snacked on chicken nuggets and played with toys. By the time Price walked into the restaurant — where she worked up until earlier this month — with three supporters and poster board at her side, many of the tables inside were filled with friendly faces.

An old song by Hootie & the Blowfish played over the speakers and a few customers in line looked confused by what was starting to unfold, but the unusual Saturday morning was just beginning.

Price, a prominent local organizer with the national Fight for $15 campaign at major fast-food chains, grew up as a fighter. Raised in the Smith Homes housing project in south Greensboro, she had never been involved in politics or organizing until discovering this campaign last spring, she said, but easily transferred her experiences of fighting for every inch into a struggle for change. During the campaign’s initial nationwide strike at a number of fast-food chains, Price organized half her co-workers at the Wendy’s on West Market Street in Greensboro to participate. That’s when the illegal retaliation for organizing began at work, she said, but she plowed ahead, getting involved in related efforts including Black Lives Matter and gay rights struggles.

Supporters were still arriving about 30 minutes into the action on Jan. 24 as people pulled most of the tables together into a large U shape to take up more space. Price’s supporters, who all bought something small, played Uno, Chess, worked on a laptop and caught up with friends. Juan Miranda, one of the Fight for $15 organizers, wrote in large print on a white poster board: “Unfair labor practices here,” but waited to hold it up.

The whole thing contained the feeling of a reunion, as Price greeted supporters and introduced herself to those she didn’t know personally, and also simmered with tension of the upcoming action. After making the rounds and reuniting with her kids, Price posed for a picture with her children and their signs, which read, “When mommy struggles I struggle,” and “Give mommy back her job.”

Shortly after, a Wendy’s employee opened a door to the back and instructed people they couldn’t take photos inside of the restaurant, the first acknowledgement by staff that anything out of the ordinary was occurring.

“We just got a new general manager and her first day she actually stood behind me clapping in my ear saying, ‘Hurry, hurry, hurry, seven-second burgers,” Price said, adding that it takes about twice as long. Nobody deserves to be treated that way, as less than human, she said, and it pushed her over the edge.

First Wendy’s cut her hours, Price said, and then told her she couldn’t discuss anything other than official business at work. Price started being written up for small things, such as alleged issues with her uniform, and Price knew why. But she kept organizing, and eventually filed a complaint with the National Labor Relations Board alleging retaliation for organizing, which is illegal.

The same day Price learned that the board found merit to her claim, Wendy’s fired her, she said.

A manager at the West Market Street Wendy’s, in a stretch of fast-food chains including Taco Bell and McDonald’s at the corner with Spring Garden Street, said they don’t talk to the media before quickly hanging up the phone.

Price said that the campaign to support her began with phone calls to the store demanding her reinstatement and condemning the illegal retaliation, adding that a former coworker told her they had been instructed to just stop answering the phone due to the volume of calls on Price’s behalf.

Organized labor has made relatively few inroads in the Triad in recent years. With the exception of occasional demonstrations by unionized postal workers, the now-defunct Greensboro Industrial Workers of the World and the Farm Labor Organizing Committee, union activity in Greensboro has been somewhat minimal.

The fast-food organizing campaign here, running alongside a national effort, has catalyzed the largest upswing in working-class organizing around labor. As a matter of principal, only workers like Price speak to the media in an effort to amplify their voices rather than organizers. Despite several one-day strike actions and other organizing activity at chains including Wendy’s and Taco Bell, Price is the only one in Greensboro who has been fired as a result of her union activity.

“It’s not just about you, it’s about any worker,” one supporter told Price on Jan. 24, emphasizing that she wasn’t just standing up for herself, but for many that suffered under the same low-pay and poor conditions.

The demonstration kicked up a notch as Miranda pulled out a bullhorn, quickly introducing Price before handing it over.

“I decided I wanted to fight back,” Price said, tearing up as she started telling her story. “I am tired of the way they treated me. We’re here for every fast-food worker that has been discriminated against, because it’s not fair and it’s not right.”

Price told her supporters, a cluster of customers and a few Wendy’s employees behind the counter that the company had purposefully ignored multiple workplace injuries she suffered. Once her son needed to be hospitalized due to an asthma attack and a doctor actually got on the phone to explain to Price’s boss the unequivocal need for Price to leave work and bring him to the hospital, she said.

“Things like that should not happen,” Price said, wiping a tear from her eye.

Demonstrators quickly put the tables and chairs back in place, explaining that they didn’t want to inconvenience workers and that the company is the target. Before taking the protest outside to the front of the restaurant in the hostile wind and biting rain, the nearly two-dozen participants lined up to hand the manager on duty signed slips demanding Price’s job back.

“Crystal Price was fired because she is a local and national leader in the fight for $15 an hour and union rights,” it read. “[The National Labor Relations Board has] determined that management at this store has been targeting Crystal Price because of her union activity since September 2014. We demand that she is reinstated to her regular hours immediately.”

Price said she is worried that she and her children will be forced to live in a shelter next month if she remains unemployed, but added that her firing will in no way inhibit her organizing and drive for justice.

“If I stop now it would be sending a message that says ‘Give up,’ and I can’t give that message to my kids,” Price said after the protest. “I’m gonna keep going.”

She also encouraged other fast-food workers to join her.