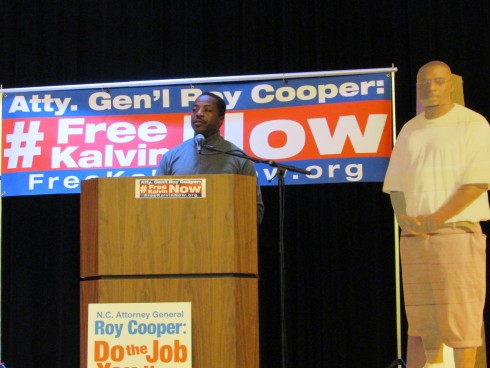 Opponent Ken Spaulding, a lawyer and former state lawmaker in Durham, leveled a blistering critique of his primary opponent’s handling of the Smith case.

“I think the attorney general’s office should take a review and should have already taken a review of the circumstances based on the investigation that has already been done by your local government,” Spaulding said. “It’s my understanding that if you’re seeking justice, it doesn’t always mean it’s always going to be on the side of the prosecution. Justice should be blindfolded.”

While Cooper has largely remained silent on matters of racial justice, Democratic politicians in other states have embraced a criminal-justice reform agenda, or at least have been forced to entertain proposals for change.

Most notably, before dropping out of the Democratic presidential primary following a disappointing performance in Iowa, Martin O’Malley adopted an extensive platform to reform policing and the courts. O’Malley served as governor of Maryland and, before that, as mayor of Baltimore, where riots erupted last year after Freddie Gray died in police custody. Hillary Clinton and Bernie Sanders, the remaining candidates in the Democratic primary, have also made racial fairness and reform of the justice system of mainstay of their respective campaigns in response to prodding from the Black Lives Matter movement.

O’Malley called for national legislation requiring “law enforcement agencies to report data on all police-involved shootings, custodial deaths, discourtesy complaints and use of excessive force” in a universal database accessible to the public.

The Ferguson Commission, appointed by Democratic Gov. Jay Nixon, similarly recommended a statewide database on police use-of-force incidents for the state of Missouri. Nixon appointed the commission in the wake of the fatal shooting of Mike Brown by a Ferguson police officer in 2014. The governor sustained criticism for responding slowly to the crisis and, according to some, for abiding the police’s militarized response to protests that erupted after Brown’s death. 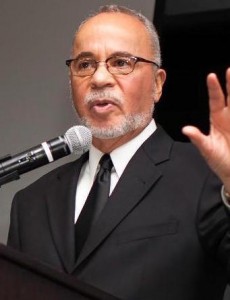 Spaulding, one of the two Democratic candidates for governor, said he would support a database of police use-of-force incidents in North Carolina.

“I think that’s a constructive idea,” he said. “The more accurate information we have the more we do know what we’re dealing with and what has to be addressed.” The candidate added that it’s important for all citizens and elected officials to support the law-enforcement community.

Bishop Todd Fulton, president of the Ministers Conference of Winston-Salem and Vicinity, said he led a delegation to meet with Cooper in mid-February. In addition to asking Cooper to meet with former Assistant FBI Director Chris Swecker on the Kalvin Michael Smith case, Fulton said he and the pastors asked the candidate for his position on public access to police body cameras. They’re still waiting for a response from Cooper on both counts.

Before he dropped out of the Democratic presidential primary, O’Malley pledged on his campaign website “to work with law enforcement, advocates and other stakeholders to establish national standards for deploying and developing technology, while protecting privacy and community access to data provided by body cameras or similar tools.”

Spaulding said he would support something similar on a statewide level.

“The overwhelming majority of law enforcement officers are doing their job and doing it well,” said Spaulding, who noted that he has represented law enforcement officers in his law practice. “When we have situations with excessive force being use then the public and press needs to be factored into that. It’s not anti-police. We have to make it clear to my community and the white community that misconduct is in the minority. But when incidents do occur, we cannot run away from them, because it ruins the reputation of our very good police officers.”

While North Carolina cities have avoided the unrest that overtook the St. Louis area and Baltimore in the wake of the police-involved deaths of unarmed black men, patterns of racially disparate policing in North Carolina are not dissimilar.

Black drivers in North Carolina are 75 percent more likely to be searched than whites and 43 percent more likely to be arrested, according to a report by UNC-Chapel Hill Professor Frank R. Baumgartner that was co-authored with Bayard Love, Kelsey Shoub and Derek A. Epp. The public data that formed the basis of the report is maintained by the state Justice Department, headed by Attorney General Cooper, as a requirement of state law.

The US Justice Department’s Ferguson Report, which found that the city’s police department violated the constitutional rights of African-American residents, noted that blacks were twice as likely as white drivers to be searched during vehicle stops, but were “found in possession of contraband 26 percent less than white drivers, suggesting officers are impermissibly considering race as a factor when determining whether to search.”

The Baumgartner report noted a troubling parallel in North Carolina.

“Officers appear less likely to find contraband on black drivers after conducting searches based on consent or probable cause,” the report said. “This suggests that the disproportionate use of these searches on black motorists is unjustified. Indeed it is just such a disparity that the US Department of Justice points to as evidence of racial bias in the Ferguson report.”

Spaulding said the findings in the Baumgartner report are nothing new.

“There was a disparity in the arrests and also searches and seizures,” he said. “I raised issues about it back in the ’70s, and now it’s far more symptomatic. As governor, I would have sensitivity with this because I’ve dealt with it directly. A governor that’s had some experience can address what we need to do while recognizing there’s some bad people out there who need to be punished.”

Editorial: Police videos are always in the public interest

Brian Clarey - May 10, 2017 0
The law’s intent is clear: “An act to provide that recordings made by law enforcement agencies are not public records….” It’s nonsense, of course —...
Loading Comments...
%d bloggers like this: