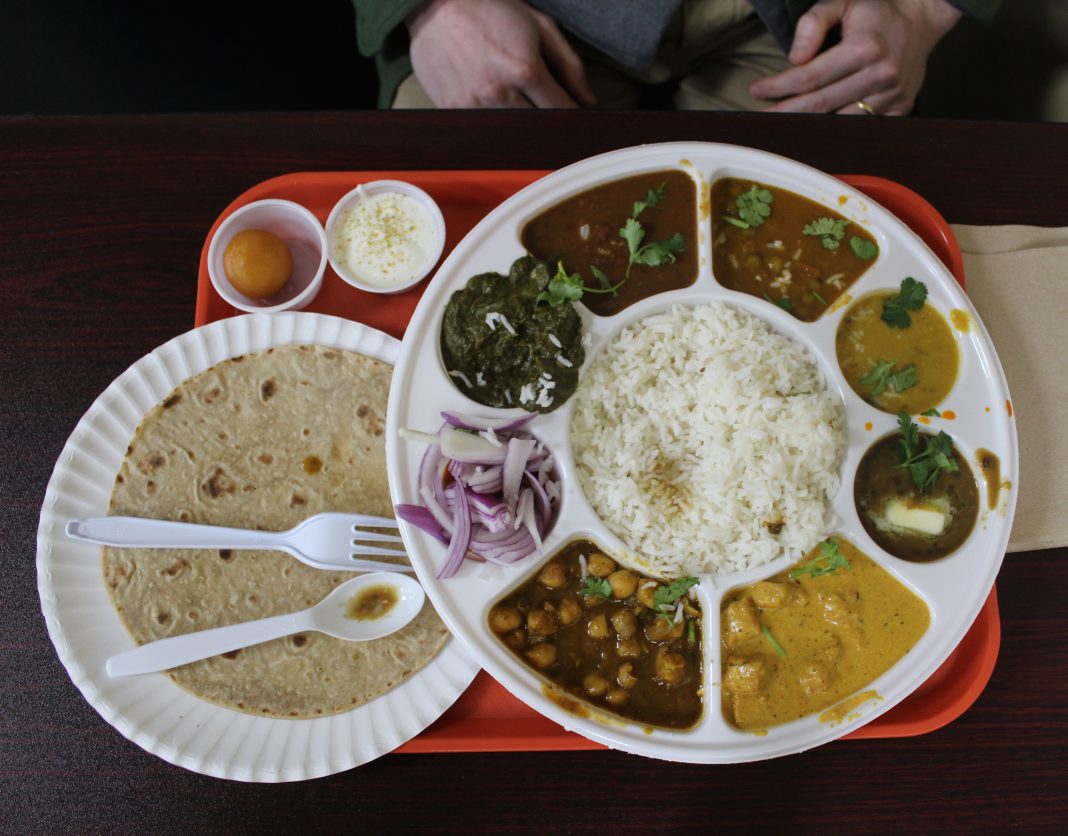 Almost none of you have ever eaten at Indu Convenient Store. And even after reading this, most of you still never will.

That’s because even among the foodie crowd, there’s still a strong reluctance to stray too far from the mainstream. As I sat with friends at a small table at the vegetarian restaurant hidden inside of this south Asian grocery, I realized that so few of the people I told about the delicious Punjabi thali sampler platter would ever come and try it.

But if you’re one of the few who genuinely likes to try new things — even when those new things aren’t handed to you out of the window of a food truck by a white hipster — follow me to Indu.

Chances are good you’ve been to Super G, the king of all international grocery stores in Greensboro. Maybe you’ve explored the broader FantaCity shopping center, home to several Asian restaurants, small immigrant-owned shops and a Korean karaoke joint. But I’m guessing that unless you boast some south Asian heritage, you’ve overlooked Indu.

Though the business faces West Market Street, the sign gives no hint of the restaurant within. Around the larger letters that read “Indu Convenient Store,” smaller text merely says, “spices, naan, Indian grocery and vegetables.” If you stand directly in front of the store, you can see in through a window that there’s a counter inside with a menu above it. But the lit-up sign outside reads in all caps, “Singh CPA PLLC: Accounting & Tax Services.” 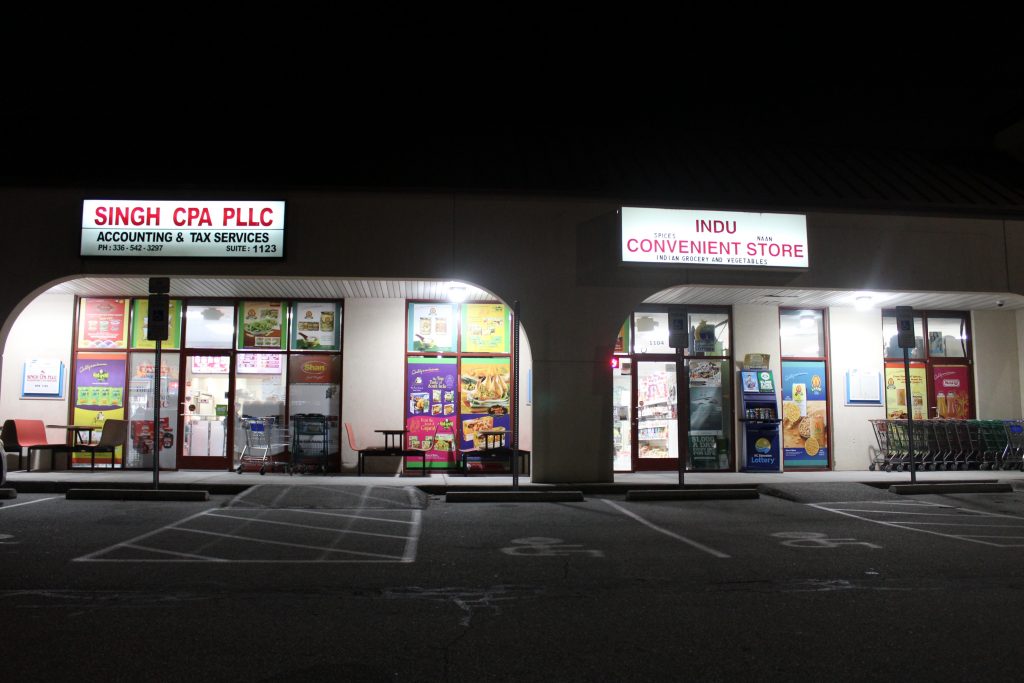 I showed up on a tip, the same way most disconnected, food-loving white people probably end up at a place like this. My friend Sam heard about it from his friend, who also advised trying the Punjabi thali. Naturally I went to check it out with Sam and his wife Katie as soon as possible.

When you walk into Indu Convenient Store — which has been providing south Asian groceries, religious items, cosmetic products and more since 2006, according to its website — the first things you see are rows of products.

There are dozens of such businesses throughout the Triad, including other Indian-centric grocery stores in Greensboro. What makes Indu unique is the vegetarian restaurant just to your left and Bismillah Halal Meats, a contained counter at the back of the shop selling goat, lamb, beef and chicken.

Most Indians identify as Hindu — about 80 percent according to the nation’s 2011 Census — and many of them (though of course not all) are vegetarian. Muslims are the next-largest religious group in India, and though far fewer in number, they make up more than 96 percent of the population in neighboring Pakistan, according to the Pakistan Bureau of Statistics.

In a city like Greensboro, it makes sense for a niche grocery like Indu to cater to both vegetarian Hindus and Muslims who follow halal (not dissimilar to kosher, in some respects), hence both distinct yet separate food-service options.

But if you’re dining in — which I highly recommend you do — the vegetarian fare is where you’re headed. If you want a light snack, order the chana chaat. This chickpea-based dish with cilantro, lime, tomato, onion and more is incredibly bright, providing a refreshing burst of flavor that would also make for an appropriate appetizer. 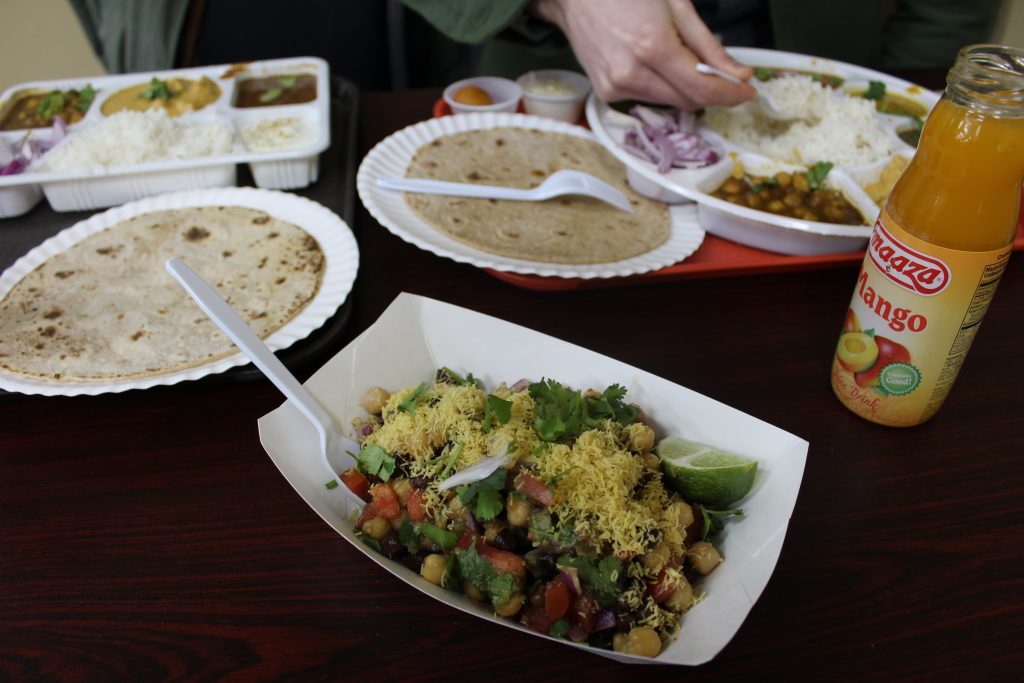 Feeling hungry? Order the large Punjabi thali platter. It comes with — among other things — rajma (a kidney bean-based dish with thick gravy), a scoop of somewhat similar and creamy dal makhani, saag, dal tadka (a side generally made with lentils and ghee), rice and gulab jamun for dessert. You don’t need to know what any of those items are to enjoy the mélange of flavors and spices the thali — or platter — provides. The paneer (a cheese cube dish with sauce) and rajma in particular left great impressions.

There are plenty of other options on the menu, of course. You could try the Desi burger, whose name refers to people and products from the Indian subcontinent and surrounding region as well as their diaspora. From the menu picture, it looks pretty straightforward. So do the various vegetarian pizza choices, save for the toofani paneer, which I have yet to try.

There’s roti as well as various samosas, paneers and chaats. Sam, Katie and I were already stuffed, though my eyes wanted me to sample even more off the affordable menu. But I compromised, buying myself a few frozen foods to take home and make another day. I had mixed results, with none coming close to the satisfying delight of the delicious high-quality food served quickly at Indu.

The dining area is nothing glamorous or bougie, closer to the taqueria in the back of Compare Foods than the beloved Teeter Thai, two worthwhile grocery store options in Winston-Salem. I didn’t come for glitz, soft lighting, comfortable booths, quiet background music, or a familiar and plain atmosphere. I came for some damn good food, and left Indu thrilled.

If that’s all you need, you’re going to love it here.