In an article about craft beer pushing Budweiser aside this week, the Wall Street Journal led with Jake’s Billiards in Greensboro.

Budweiser is trying to win back younger drinkers in their 20s, revamping its marketing campaign in the hopes of preserving (or improving) its market share. 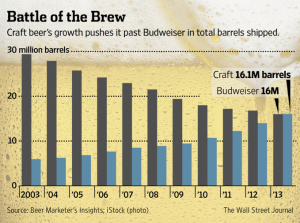 “You’re dealing with a 21- to 27-group that’s open to change. It won’t be their No. 1 brand but it will be in the purchase tent,” the article quotes a Budweiser distributor saying.

One of the interesting things about a chart included with the article, left, is that it measures barrels shipped. I could be wrong, but I presume that doesn’t match up with the total amount of beer actually sold — think about all the beer consumed on site at craft breweries and brewpubs, places such as Small Batch Beer Co. in Winston-Salem that don’t ship their product anywhere.

[As an aside, Jake’s does have a pretty strong reputation for its craft beer selection. I tried and enjoyed the ESB from Green Man Brewery, a North Carolina company, at Jake’s Billiards just last week.]

Love craft beer? Don’t miss our Barstool column every week in print and online, the only weekly booze column in the Triad.