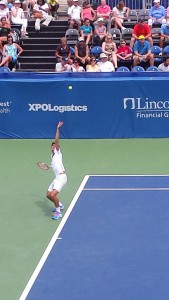 Americans love winners, but we relish the underdogs, too.

Kevin Anderson, ranked No. 15 in the world among the Association of Tennis Professionals, looked to have the 10th game of the second set of the Winston-Salem Open finals in the bag. The score was 40-15 in Anderson’s favor. Under the August sun, Anderson tested the bounce of the fuzzy neon Wilson balls on the blue hardcourt, tossing one to a ball boy dressed in a red polo shirt.

His opponent, France’s Pierre-Hugues Herbert, had withered at more than a dozen Anderson aces; the South African would record 17 by the end of the match.

But Herbert’s story wasn’t finished. Not at this point., He’d worked far too hard to allow Anderson to simply record another ace, taking the game and tying the set. If he was going down, he was going down fighting.

Sure enough, Herbert thrilled Winston-Salem, if only for one final, cresting moment.

The unseeded Herbert had slugged through the trenches of the qualifiers, winning eight matches before Saturday’s finals. Along the way, he’d vanquished the qualifiers’ 6th seed in the opening round as well as the 10th and 13th overall seeds.

Herbert triumphed over 13th-seeded American Steve Johnson during the semifinals on Aug. 28. The crowd seemed to be rooting for Johnson, who was ranked No. 48 in the world. Not only that, but in his time at the University of Southern California, he became the most-decorated collegiate player in American history.

Johnson’s pedigree served him well in the beginning. He took the first set easily, 6 games to 3, based on searing serves and aggressive returns. The second set initially seemed to go Johnson’s way, too.

No matter what Johnson threw up, Herbert stayed cool. His finesse contrasted Johnson’s power, and when Herbert lightly bounced the ball just over the net, Johnson would sprint in vain.

The second set went into a tiebreaker. Herbert took the offensive with the soft, lethal touch of his backhand. When Johnson smashed the ball into the net after having a dog’s age to prepare his attack on a ball which seemed to levitate straight off the court, the crowd let out a deep, audible gasp. All Johnson could do was scowl.

Herbert’s win in the tiebreaker spelled Johnson’s end. The Frenchman slammed aces all during the third set and took it even more handily than Johnson had taken the first.

Herbert was going to his inaugural ATP finals. But there he had to face Kevin Anderson.

Anderson stands very tall at 6-foot-8, and he throws every inch of his frame into his serve. In the semifinals against Tunisian Malek Jaziri, his serves averaged 125 miles per hour; the fastest clocked in at 137. By the end of the match, Jaziri used his racquet as a shield as the ball blazed toward him.

Herbert would have his hands full.

By this time, though, the spectators launched themselves behind Herbert’s Cinderella story. They accepted his victory over our American boy and reveled in the romantic idea that maybe, due to this young man’s hard work, he’d triumph spectacularly.

The first set of the finals started as a back-and-forth affair.

Herbert fired the crowd up after he fought back from 0-30 to take the first game. But Anderson’s serving swept Game 2, capped by two aces. Herbert matched Anderson’s aces in the third game, finishing with two of his own before Anderson could force deuce.

Against the odds, Herbert had some heroics left in him.

The Frenchman scrapped for every point. His concerted effort against Anderson’s aggressive play inspired the crowd, who cheered at each little victory and took every chance to call out, “C’mon, Pierre!”

Anderson’s serve rocketed into Herbert’s right corner, but Herbert managed to return. A shallow volley from Anderson seemed impossible to catch, but Herbert dashed to scoop the ball gingerly back over the net before it took a second bounce. Herbert skidded, nearly crashing into the sideline ball boy, as Anderson lightly backhanded the ball towards Herbert’s baseline. It bounced softly in the back court.

No matter how hard Herbert scrambled, there was no way he could return this one, too. The laws of geometry were against him. The game had to be Anderson’s.

But Herbert achieved something just short of a miracle, and he did it with style.

Right before the ball could hop out of bounds, Herbert — back to the net, still in front of the ball, mind — tapped it backwards between his damn legs, sending it in a high arc right back towards the stunned Anderson.

Disbelieving shouts of “Oh my god!” erupted from spectators as the players fell back into routine volleys.

Eventually, Anderson returned a little too hard, and the crowd exploded in approval. Herbert basked in the applause.

Sure, Anderson wound up taking the tournament. But with his legendary tear through the Winston-Salem Open, Pierre-Hugues Herbert shot up the ATP rankings from No. 140 to No. 21 and captured the crowd’s admiration.

After all, we love the underdog.