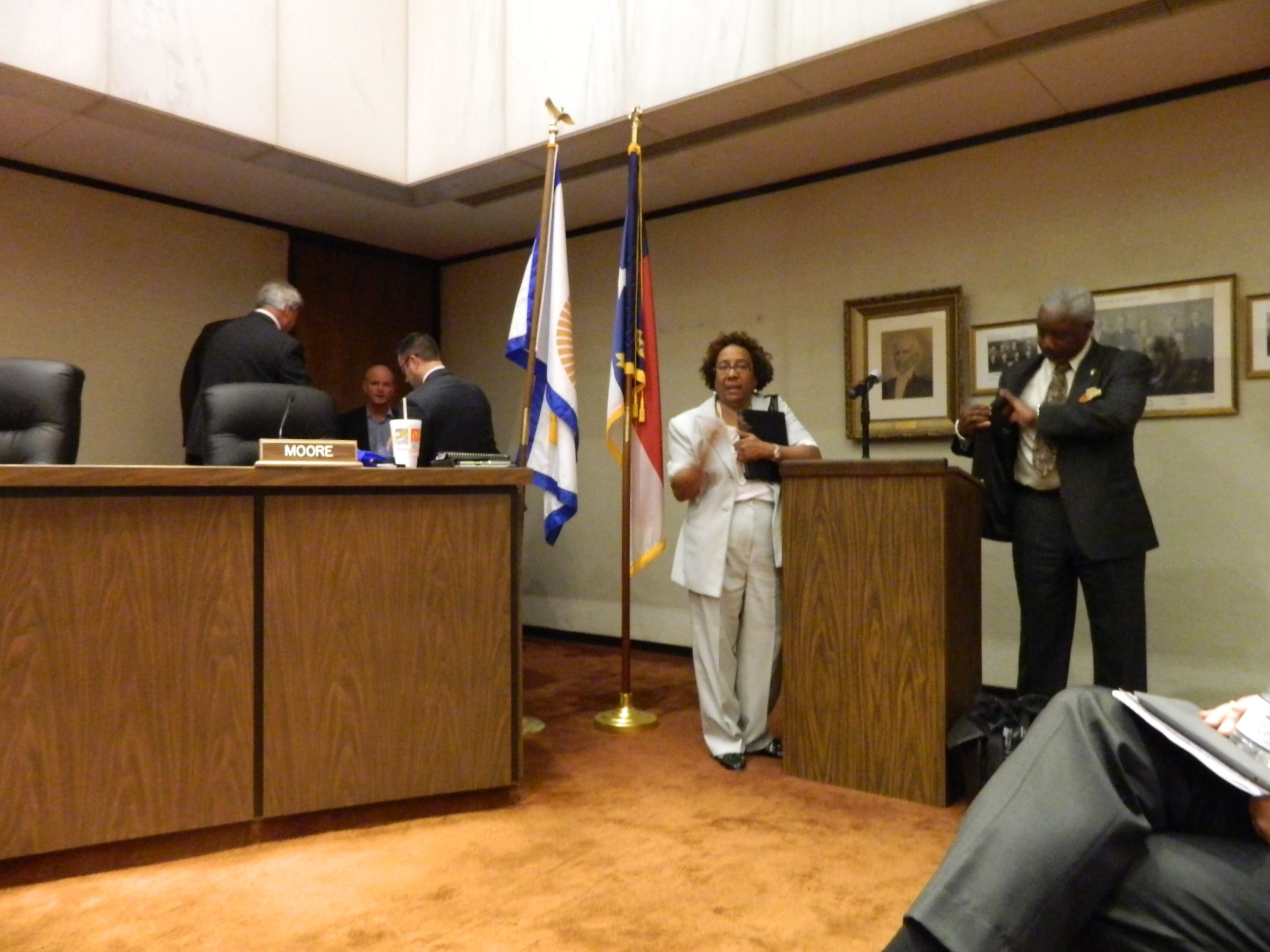 A political-action committee linked to the mayor of High Point is under investigation for violating campaign-finance law after years of delinquent reports.

A political-action committee led by the mayor of High Point is under investigation by the state Board of Elections for engaging in impermissible electioneering activities.

The Black Leadership Roundtable of High Point PAC was suspended — technically “a notice of termination of active status” — by the state Board of Elections in March 2013. The committee has not filed campaign finance reports since mid-2009. Correspondence from the state Board of Elections to Bernita Sims — who serves as mayor of High Point and is the last reported co-chair of the Black Leadership Roundtable PAC — has been returned undeliverable since last October.

Kim Strach, then the deputy director for campaign finance at the state Board of Elections, explained to Sims in the termination letter that in accordance with state law, “the committee is ineligible to receive contributions or make expenditures until such time as any delinquent reports are filed and has satisfied any statutory penalty incurred as a result of noncompliance with the provisions of [the law].”

Strach has since been promoted to state elections director.

In a separate letter in March 2013, Strach informed Sims that the state was assessing the PAC with $7,650 in fines for missing and late campaign finance committee reports.

Despite its inactive status, an endorsement slate bearing the imprint of the Black Leadership Roundtable of High Point surfaced before the recent primary election. Triad City Beat received a PDF of the endorsement slate on April 23, two weeks before the primary. The organization endorsed Cecil Brockman in state House District 60 and Carlvena Foster in Guilford County Commission District 1 respectively. The two candidates, who live in High Point and are seeking to represent districts that include parts of High Point and Greensboro, both won their primaries. Another High Point native endorsed by the organization, Bruce Davis, lost his primary for the Democratic nomination for the 6th Congressional District. Marcus Brandon, a member of the state House who has cultivated close ties to High Point and received the Black Leadership Roundtable’s endorsement, similarly lost his primary for the Democratic nomination in the 12th Congressional District.

“It’s open to whoever wants to come,” she said. “You can come. They all knew that it was happening. It wasn’t a closed-door meeting.”

When Triad City Beat noted that the suspension of the Black Leadership Roundtable of High Point’s status as a political action committee prevents it from receiving contributions or making expenditures, Sims responded, “We’re not.”

She added, “We’re doing it as we’ve always done it — as a civic committee.”

But Josh Lawson, a spokesperson for the state Board of Elections, said whether or not the organization is raising and spending money, “they are currently not supposed to be functioning as an advocacy organization.”

Lawson said, “The suspension gives teeth to the campaign-finance laws. When you are suspended you cannot continue to operate below the radar.”

He added, “I don’t want it to come across as that I’m making a prejudgment about the investigation. That would be up to the state Board of Elections when they’ve heard testimony and made a determination after reviewing the evidence.”

As to whether the organization spent any money or received unreported in-kind donations to print the endorsement flier, Sims could not be reached for clarification. Regardless of whether any money was raised or spent, Lawson indicated it’s against the law for any political-action committee that has been suspended to advocate for or against candidates.

Lawson said the Black Leadership Roundtable of High Point is currently under investigation by the state Board of Elections.

“We received an initial complaint,” he said. “The investigation remains open until we decide whether we should refer this for prosecution or it can be resolved internally.”

Sims faces another, more serious matter. In November 2013 she was indicted for a felony involving a $7,000 check that she wrote to her sister as part of a family estate settlement. The indictment alleges that Sims knew at the time that the account did not have sufficient funds to cover the check. But Sims told State Bureau of Investigation Agent Gerald R. Thomas that she believed there were sufficient funds in the account, but learned later that there were fees and other deductions that she had been unaware of.

Guilford County Elections Director Charlie Collicutt referred the election matter to the state Board of Elections for investigation to determine whether there has been a violation of the Black Leadership Roundtable of High Point PAC’s inactive status in early May after receiving an inquiry from a High Point resident who read about the organization’s endorsements in an online story published by Triad City Beat.

A July 2009 letter from the Black Leadership Roundtable to the state Board of Elections identifies Bernita Sims and Talmadge Killens as co-chairs of the organization. Eight other names are listed on the letterhead, including that of Bruce Davis, who currently serves on the county commission and ran unsuccessfully for the 6th Congressional District seat. Sims is also listed as treasurer on the letter.

Appealing a fine of $1,500 at the time, Sims wrote, “We have experienced several changes in the organization that have impacted our ability to provide reports in a timely manner. Our organization has lost several key members over the last eight months which has resulted in late reporting.

“We have recently managed to have all mail directed to the proper person and will be able to ensure that all reports will be done timely and accurately,” she added. “We ask for your leniency on this occasion.”

Sims said she understood that the penalties levied against the Black Leadership Roundtable would have to be resolved before it could resume operations as a political action committee.

“There are those who want it to happen,” she said. “Not necessarily me.”