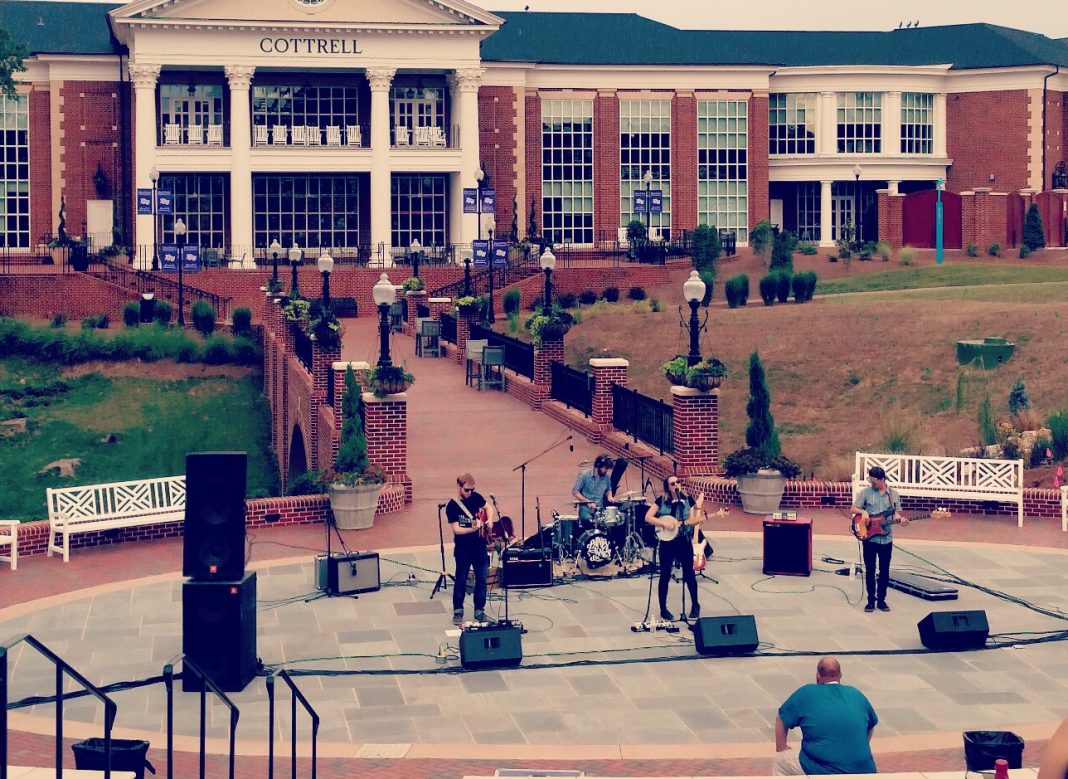 The crowd stretched across the green grass, laying out blankets and opening lawn chairs. The warm summer breeze carried the smell of picnics and grass in the air, and riding along with it came the soothing picking from Laney Jones’ banjo.

Taking the stage alone for the first few songs, Jones excitedly skipped onto the stage, a smile stretched across her face. The crowd stared down from the various levels of the ascending outdoor venue, watching the happy-go-lucky artist perform. Opening with a cover of Fleet Foxes’ “Sun Giant,” her voice carried boldly and pleasingly into the warm air, settling the crowd into their grassy seats.

As Jones plucked into her songs, her presence radiated the clear joy she felt while performing, bouncing on her toes, smiling, her entire body moving to the music she made. With vocals that brims with sweet and innocent tones, Jones’ contains a voice that is reminiscent of Sylvan Esso blended with Gillian Welch. But the thing that separates Jones’ songs from her contemporaries lies in her blending folk and Americana with pop-rock, giving her songs a round and marketable tone.

Laney Jones and the Spirits’ performance at High Point University was the second concert in the High Point Arts Council’s Art Splash, an outdoor, summer concert series that runs on Sundays until Aug. 13. The event brought out a large audience of primarily families. Jones’ songs mixed neatly with the warm evening on Sunday, providing a gentle touch to a lazy summer day.

With the release of her first EP Beyond the Blue in 2012 and a full-length album Golden Road in 2013, Jones has made a name for herself in the indie-folk genre. Shortly after the release of Golden Road, she was invited to perform for a masterclass at the John F. Kennedy Center for the Performing Arts in Washington DC that was featured on an episode of PBS’s “Great Performances” alongside Alison Krauss, Sara Bareilles, Ben Folds, Josh Groban and Renee Fleming.

Even with her success in the music industry, a Southern charm and small-town simplicity rings through in her performances. As her full band joined her on stage and she changed from banjo to guitar, Jones spoke about the small goat farm she lives on in Florida. While her songwriting and voice ring most true while she performed alone on stage, her backing band added a welcomed layer to the music, delivering a full and driving sound behind Jones’ soft voice.

Remaining an unsigned artist, Jones has earned her place in the current indie scene, playing such famous venues as New York’s Lincoln Center. The charm and liveliness with which Jones performs draws your attention, with a pure and simple effect of raising your spirits. Moving from banjo to ukulele to guitar and harmonica, Jones showed her chops as a multi-instrumentalist and her command over songwriting.

Some of her set featured songs from her self-titled 2016 album that landed in the spot of more cliché, popular and mass-market music — neatly crafted songs that seemed more formulaic in their dimensions and left more passionate songwriting behind. Such songs were the low point of Jones’ set, though even with her more pop-rock tunes, she managed to come right back with a poetic and captivating melody in the next song.

A truly vivacious and cheerful performer, Jones’ performance neatly uplifted the lacking music scene in High Point. Though this concert series features a mix of both touring and local acts, this series is a promising step forward for music in the Triad, drawing the community together to share in the beauty of music.

Heard a rumble, will travel